"Lrrreconcilable Ndndifferences" is the ninety-ninth episode of Futurama, the eleventh of the sixth production season and the eleventh of the seventh broadcast season. It aired on 26 August, 2010, on Comedy Central. It guest-stars Katee Sackhoff as Grrrl and Sergio Aragonés and Futurama creators Matt Groening and David X. Cohen as themselves. After a bungled Earth invasion, Omicronian leader Lrrr faces a mid-life crisis.

In 2011, Maurice LaMarche won a Primetime Emmy Award for Outstanding Voice-Over Performance for voicing the roles of Lrrr and Orson Welles' head in this episode.

Act I: "I am Lrrr, ruler of the planet Omicron Persei 8!"

Stopping her husband watching The Scary Door, Ndnd becomes fed up with Lrrr's lack of motivation to conquer other worlds. He reluctantly invades Earth. However, he arrives during Comic-Con 3010 and is mistaken for a costume contest participant and leaves dejected. Concurrently, Fry attempts to author a superhero comic book featuring himself as the superhero saving a captured Leela from a malevolent alien. The crew is unimpressed with the comic, with the exception of the back page of novelty toy ads for X-Ray Specs, vomit, sea monkeys, and the Professor's disintegration guns, which are actually only teleportation guns. Leela also criticizes the comic, leaving Fry to figure out how to make the story more compelling.

Back on Omicron Persei 8, Ndnd learns of Lrrr's failure and kicks him out of their home. Lrrr returns to Earth, seeking shelter at the Planet Express headquarters.

The crew diagnoses Lrrr and his marriage problems as symptomatic of a midlife crisis. Leela encourages Lrrr to recommit himself to his marriage with Ndnd, but he listens instead to Bender and gets horn extensions, flashy new clothes, and goes out to The Hip Joint to meet new women. There he meets an attractive female Omicronian named Grrrl. While on a date with her, she reveals that she is actually a human woman from the Comic-Con wearing an Omicronian costume. Though she is very attracted to real Omicronians, Lrrr rejects her and seeks Leela's advice on how to win back Ndnd.

Fry and the crew help Lrrr stage an invasion of Earth using a fake broadcast with the help of Orson Welles' head à la the 1938 War of the Worlds radio broadcast. Ndnd is fooled, but so is Zapp Brannigan and the Earthican army, who immediately surrender Earth to Lrrr.

Leela scolds Lrrr, demanding that he end the charade and tell Ndnd the truth, but he hesitates due to Ndnd's renewed romantic interest and forces the citizens of Earth into slavery. During this time, Leela constantly nags Lrrr about telling Ndnd the truth, which causes Ndnd to become suspicious about their relationship. She confronts Lrrr, demanding to know if he is having an affair. Grrrl reappears, announcing that she loves Lrrr and will fight for him, brandishing a disintegration ray. Ndnd quickly takes the weapon and shoots Grrrl, causing her body to disappear. Ndnd reveals that she is not upset that Lrrr may have been minutely romantically involved with Grrrl, but that Lrrr allowed Leela to nag him, which Ndnd feels is her role and right as his wife. She invokes an Omicronian rite called Rrrmrrrmrrrfrrrmrrr or Consequences where Lrrr is reluctantly forced to prove his love for Ndnd by shooting Leela, whom he values as a friend, with the Farnsworth Novelty Disintegrator Ray.

As he fires, Fry leaps in front of Leela, sacrificing his life. Ndnd is moved by Lrrr's demonstration of love and the two happily depart back to Omicron Persei 8. Leela is devastated by Fry's sacrifice. However, as the Omicronians depart, Grrrl reappears, shocking the crew. She reveals that the disintegration gun is merely one of the Professor's novelty teleportation guns that she purchased from an ad in the back of a comic book. She then begins to hit on Zoidberg who responds by saying of course he'll marry her. Realizing that Fry is alive, the crew find him back at Planet Express, putting the finishing touches on his comic. Inspired by his own heroic actions, his super hero counterpart attempts to rescue Leela from the malevolent alien by leaping in front of its ray gun. Leela is pleased with the new ending and commends the comic book, giving Fry a kiss on the cheek.

In its original American broadcast, "Lrrreconcilable Ndndifferences" was viewed by an estimated 1.981 million households, a bounce of 200,000 viewers since "The Prisoner of Benda".[2]

On 14 July, 2011, Maurice LaMarche was nominated for Outstanding Voice-Over Performance for his performances as Lrrr and Orson Welles' head in this episode at the 63rd Primetime Emmy Awards.[4] 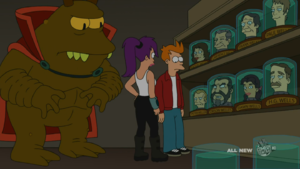 Fry: So? What do you think of my comic?
Bender: Let me put it like this: After I leave here, I'm getting a memory enema.

Invader X: One more step and little Miss "constructive criticism" gets it!

The Comic-Con sequence, for example this costume contest scene, is filled with references.

The Comic Con section especially is filled with allusions and references: