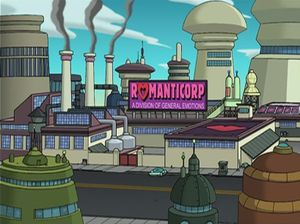 Shortly before Valentine's Day, Bender and the Planet Express Ship are having major differences, creating tension between them. Meanwhile, Professor Farnsworth informs the crew that Planet Express has landed a big contract with Romanticorp. The crew takes a trip to Romanticorp to finalize the deal, where they pick up conversation hearts to deliver to Lrrr and Ndnd. After making the deal, Farnsworth is able to afford some modifications to the ship, including an improved personality (female) software for the Planet Express Ship, whom Bender immediately falls in love with.

While Bender dates the ship, Fry tries to find the perfect pickup line from the huge load of conversation hearts they are supposed to deliver in order to impress Leela with it. Bender has become tired of the Planet Express ship, and starts to date cheap floozies on the side. This arouses the ship's suspicions and makes her jealous. Bender keeps stalling the Planet Express Ship, and making her more suspicious.

As the crew delivers a load of conversation hearts to Omicron Persei 8 as a peace offering from Earth's government, the Omicronians get mad at the 'I Wuv U' hearts and chase the crew off the planet, and then attack them with a fleet of Omicronian fighters. Bender picks this moment to break up with the ship, because he likes a dump to be as devastating as it is memorable. The Planet Express Ship screams and shuts down its engines, as it starts to sob. Seeing the opportunity for a fatal blow, the Omicronians fire several missiles, which leave the ship in ruins.

Act III: "U leave me breathless" 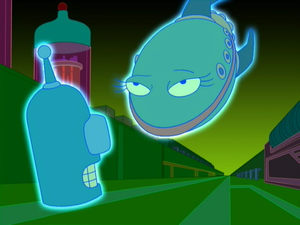 Bender and the Planet Express ship in the ship's matrix-like world.

The ship is surprisingly unharmed, save her feelings and some scorch marks, and despite Leela's best efforts to console her, is still deeply depressed. Losing all hope to get together with Bender, the ship decides to fly into the nearest quasar to unite her and Bender into a quantum singularity. The crew tries to stop the ship, which disables life support and artificial gravity. Bender offers to merge his programming with the ship's to distract it, while Leela tries shutting down the ship's brain.

While Fry and Leela are in the brain room, Fry continues looking for the ultimate heart line while Leela is busy shutting down the ship's brain. As Fry is searching, he notices that Leela's oxygen is running out. Unaware of the situation, Leela ignores Fry, thinking he is trying to give her a conversation heart. Fry secretly plugs his oxygen supply into Leela's helmet. Meanwhile, Bender is being chased around the matrix-like world of the ship's computer by her personality icon, but cannot evade merging their programming. Leela succeeds in shutting down the computer, which brings life support and gravity back online. This also stops the ship from flying into the quasar. Leela, cautiously optimistic, speaks to Fry, who does not respond. She discovers that he sacrificed his own oxygen for her. She attempts to resuscitate Fry, who has lost consciousness. While pounding on his chest to make him breathe, Fry coughs up the candy heart he has been searching for U leave me breathless. Bender separates himself from the computer's consciousness, but seems to have ingested part of her personality.

The crew dumps the now useless conversation hearts into the quasar, causing a mystical love radiation spreading across the universe, destroying many, many planets--including two gangster planets and a cowboy world. Earth, however, was exactly the right distance to not be destroyed by them, but rather to see the beautiful romantic rays, with coupless around the world, such as Leela and Fry (and Zoidberg, who is inexplicably narrating this section) who watch the romantic sky.

Farnsworth: Remember, we've got to show these people we're not bitter husks of human beings who long ago abandoned hope of finding love in this lifetime. Leela, you'll have to do some acting.
Leela: Check!

Bender: Call me old-fashioned, but I like a dump to be as memorable as it is devastating!

Leela: Look, Ship, if I learned anything from my mutual breakup with Sean that was totally mutual, it's that happiness can only come from within you.
Planet Express Ship: [crying] But Bender IS within me!

Planet Express Ship: I'm afraid I can't do that, Leela.

Lrrr: This is ancient Earth's most foolish program. Why does Ross, the largest friend, not simply eat the other five?
Ndnd: Perhaps they are saving that for sweeps.

Lrrr: Eugh! These candies are chalky and unpleasant.
Ndnd: And what is this emotion you humans call "wuv?"
Lrrr: Surely it says "love?"
Ndnd: No, "wuv". With an Earth "W". Behold!
Lrrr: This concept of "wuv" confuses and infuriates us!!

Zoidberg: [voice-over] As the candy hearts poured into the fiery quasar, a wondrous thing happened, why not. They vaporized into a mystical love radiation that spread across the universe, destroying many, many planets, including two gangster planets and a cowboy world. But one planet was at exactly the right distance to see the romantic rays, but not be destroyed by them: Earth. So all over the world, couples stood together in joy. And me, Zoidberg! And no one could have been happier unless it would have also been Valentine's Day. What? It was? Hooray! 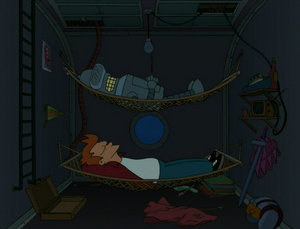