"I, Roommate" is the third episode of Futurama, the third of the first production season and the third of the first broadcast season. It aired on 6 April, 1999, on Fox. Fry and Bender move in together as roommates, and they are established as close friends, but when Fry moves to another apartment Bender feels lonely and stops drinking.

Act I: "Somebody's been leaving food around... and it's attracting owls!"

Hermes complains about Fry living in the Planet Express Headquarters, since he leaves food around, uses too much water, bathes in the emergency chemical burn shower, drys his hair in the ship's engine and is really annoying. Everyone agrees, so Fry has to find a new place to live. At the Food-O-Mat, Bender invites him to stay in his apartment in Robot Arms Apartments and when Fry goes to see the apartment, it turns out to be a tiny space only a couple of feet across. Since this doesn't work well for Fry, Leela takes Fry and Bender apartment hunting. They visit a lot of apartments, including one underwater, one built in the style of an Escher picture and one in New Jersey (that's the reason it's bad). Since they are all bad, the pair give up. They finally find a nice rent-controlled place that belonged to a friend of the Professor. Fry stays in the main apartment while Bender stays in the closet because it's perfect for him.

Bender and Fry get settled in at their new apartment to watch All My Circuits with Leela, Amy, Hermes, Zoidberg and the Professor, but a problem arises - the TV reception is bad in their apartment and in all the building's residents' apartments. Neighbors such as Randy Munchnik and a huge-assed woman come and want the problem solved so Hattie comes and looks for it. It turns out to be Bender's antenna that interferes with the entire buildings' TV reception. The neighbors want Bender and Fry out of the building but Fry doesn't want to give up the apartment, so Bender is forced to move out. He can't move back in with Fry unless he cuts off his antenna, so Bender moves back into his old place, becomes very depressed because his friend is not with him, and becomes sober.

Staggering around in a stupor of sobriety, Leela discovers Bender has made a mess of himself and tries to make him promise he will drink, but he doesn't hear her and runs out. At the apartment, Leela trys to explain to Fry that Bender misses him and he shows up at Fry's apartment with the idea of cutting off his antenna so he can live with Fry. He cuts it off and Fry is beyond remorse, so with help from Smitty and URL, they look for and reattach Bender's antenna and then move back into Bender's apartment. When Fry looks for light for the fruit tree that Leela gave him, Bender reveals there is a "closet", which is actually an entire apartment, and Fry decides to live in that part.

After having shown some initial scripts to Fox, the company asked the writers for a more down to Earth episode. The idea of "I, Roommate" was to satisfy this need.[1] The script, written by Eric Horsted, tried to distance itself from things that had scared the Fox people off, such as suicide booths, lobster creatures and Bender being anti-social.[1] Unfortunately, their reaction to the script was "Worst. Episode. Ever".[1]

As a result of the initial criticism, the show runners decided from thereon, they wanted to do the show they wanted.[2] The story line itself was developed to establish Fry's living arrangements as well as the relationship between him and Bender, and obviously a method to get people to care for Bender, despite being anti-social.[3] 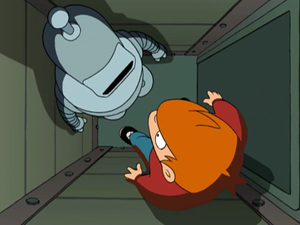 The aerial view of Bender's apartment was the way to indicate its small size,[4] since confined spaces are hard to illustrate in animation.[5]

Matt Groening, as it will not be too unusual, had not seen the The Odd Couple,[6] that the episode slightly parodies, especially during its montage.[6] Originally though, the music over the montage was more than just an interlude.[7] The episode also includes several sequences where the viewer gets a chance to figure it out before it is explicit said,[8] as well as a slow thinker, because apparently, everybody likes those.[9]

"I, Roommate" was a challenging episode to draw for the animators, especially several scenes involving the Planet Express ship were drawn before the 3D model was done and the animators had little go on, when it came to close ups of the ship.[10] Especially a scene like the Food-O-Mat, with the rotating food was hard to do.[11]

"I, Roommate" aired on 6 April, 1999. And it was the first Futurama episode that would air in its regular spot on Fox's Tuesday line up in a block of four sitcoms, previously, it had aired during its Sunday line up, between The Simpsons and X-Files. As expected, the moving of Futurama hurt its ratings.[12]

When this episode was first shown on BBC Two, on 11 September 2001 (BBC One couldn't show it that day), it was interrupted by BBC News, which meant first-time viewers only got to see bits and pieces of "I, Roommate". It was finally shown complete later that month.

would produce "HOME SWEET" over and over again infinitely (in BASIC, the presumably-intended programming language).

Bender: I'm trying to watch my input. I need plenty of wholesome, nutritious alcohol. The chemical energy keeps my fuel cells charged.
Fry: What are the cigars for?
Bender: They make me look cool.

Bender: Not enough room? My place is two cubic meters, and we only take up 1.5 cubic meters. We've got room for a whole 'nother two thirds of a person!

Bender: [thoughts; on phone] Wow, that lady has a huge ass!
Bender: Those could be anyone's thoughts, fat-ass.

Bender: [In the employee lounge, he groans and falls onto the couch. Leela follows him in.] Leave me alone!
Leela: Look at that five o'clock rust. You've been up all night not drinking, haven't you?
Bender: Hey. What I don't do is none of your business.
Leela: Please, Bender. Have some malt liquor. If not for yourself, then for the people who love you.
Bender: I hate the people who love me and they hate me.
Leela: Oh, now look. It's obvious you miss being Fry's roommate. But there's got to be a better way to deal with this.
Bender: Like how? Having my antenna removed?
Leela: Well, if that would work.
Bender: Are you crazy? That's Little Bender you're talking about. I can't cut it off. You're not a Robot or a man, so you wouldn't understand. I gotta get out of here.
Leela: Wait! I want you to look me in the eye and promise you won't get behind the wheel without some kind of alcoholic beverage in your hand.
Bender: I promise nothing! [He runs out.]