Crimes of the Hot

"Crimes of the Hot" is the sixty-second episode of Futurama, the eighth of the fourth production season and the first of the fifth broadcast season. It aired on 10 November, 2002, on Fox. It guest-stars Al Gore as himself in a head jar. When the Earth is jeopardized by global warming, the crew attends a conference in Kyoto hosted by Al Gore's head, and when the Earth's increased temperature is linked to emissions from robots, Richard Nixon's head attempts to rid the planet of them - including Bender.

Act I: "This could mean the end of the Banana Daiquiri as we know it!...Also life."

The city of New New York is haunted by a heat wave, and the Planet Express crew intend to go swimming in an outdoor pool. Unfortunately Nibbler drinks the water all in one go and then burps out a cloud of chlorine, nearly poisoning everyone but Bender, who is merely seriously corroded. The Professor shows them a movie, Global Warming, or: None Like It Hot!, in which the phenomenon of global warming is explained in a strange 1950s style, and the solution to counter it - dropping a giant ice cube into the ocean every now and then. It now seems that the time has come for this measure, as Richard Nixon's head calls for the crew to fly to Halley's Comet to obtain the necessary ice. As they arrive there, however, they learn that the ice resources of the comet are depleted, leaving Earth with a serious problem.

Act II: "WINDMILLS DO NOT WORK THAT WAY!"

Earth is now experiencing the effects of intense global warming. The polar icecaps melt, causing floods, and the intense heat is making African turtles migrate to Holland. Bender travels there to help and bring back with him a turtle that has fallen on its back, out of sympathy - because they share the same weakness: Bender cannot get up either when he lies on his back. This fact is immediately tested to the extreme by the crew and proves to be true. Meanwhile, a Civil Defense Van comes and announces a scientific conference called to Kyoto to solve the problem of global warming by the combined brainpower of Earth's scientific community. The Professor seems very reluctant to go, but does so eventually. Al Gore's head calls for the saving of Earth and offers a bag of Moon sapphires as reward. The first contestant is Dr. Ogden Wernstrom who presents his solution for the problem - a giant space-borne parabolic mirror that reflects 40% of all sunlight and thus cools off Earth. However, the mirror is struck by a passing meteorite which causes it to turn and reflect the sun light onto Kyoto, frying part of the conference center away - obviously this is not the optimal solution. The next speaker, though reluctantly, is Professor Farnsworth, who admits that he caused the current global warming problem by creating the alcohol-powered Sport-Utility Robot, the ancestor of all modern robots that cause pollution by burning alcohol and building up greenhouse gases. As a solution, Wernstrom now calls for the destruction of all robots, to the dismay of Bender.

Richard Nixon's head is throwing a party for all robots on Earth on the Galápagos Islands, and Bender is attending to it, although he knows it is a trap. All robots on the planet are congregating on the remote island, to be killed by Wernstrom's giant mirror that has been modified to fire a gigantic electromagnetic pulse on the Galápagos Islands. As Bender is telling his favourite turtle of Nixon's plan, the other robots learn of it and a panic ensues. At this moment, the Planet Express Ship with Leela, Fry and the Professor on board arrives, for the Professor has thought of a solution: all robots must turn their exhaust vents upwards and fire one great blast of exhaust straight up, to move Earth further away from the sun. Every robot must join in, or else it will not work. Every robot obeys, except Bender who has fallen on his back in a scuffle with Preacherbot and can't get up. The huge blast does not have the desired effect at first, and Wernstrom is zeroing his mirror in on Galapágos. Bender then watches his favourite turtle, which lay on its back as well, rock itself upright and copies its maneuver. Then he too joins in in the exhaust blast, and with his help, the blast is strong enough to move the planet. This throws Wernstrom's mirror off target, and the EMP blast misses Earth. For saving Earth and foiling his plan, Richard Nixon's head presents Professor Farnsworth with the Earth's new highest honour - the Polluting Medal of Pollution. Now that the problem is solved, there is only one thing still to think of - how to name the additional week in the now longer Earth year. It is declared "Robot Party Week" by the President.

Al Gore uses a Futurama clip in his movie.

Linda: I'm sure those windmills will keep them cool.
Morbo: [shouting] Windmills do not work that way! [back to normal] Good night!

Bender: Don't touch my stuff after I'm dead! It's booby-trapped!

Bender: [The chlorine cloud emerges and knocks everyone out.] Hahahaha, lightweights! Oh wait, chlorine... [Corrodes completely and falls over.]

Zoidberg: I don't hear any gasping... 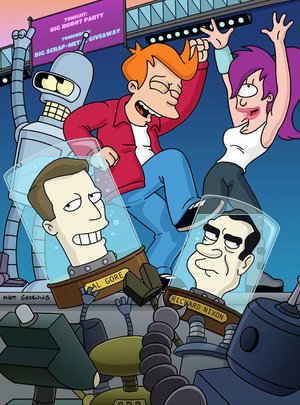 Promotional picture for this episode

Essentially every robot that's been seen before (except Flexo, the Robot Elders, and Robot Santa Claus) is seen in this episode. Besides Bender, among the Robots seen at the Galapagos Island "party" are: