Fry and the Slurm Factory 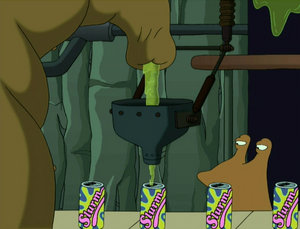 Fry, drinking a lot of cans of Slurm, and Bender are watching All My Circuits, when a commercial for Slurm comes on. The commercial advertises a new contest; the grand prize is a chance to party with Slurms MacKenzie at the Slurm Factory on Wormulon. Then one of Fry's teeth falls out and he discards it in a pile of his other teeth.

Act II: "I've never seen anyone so addicted to Slurm."

Fry starts guzzling Slurm like crazy looking for the winning bottle cap, hoping to win the contest, but to no avail. Bender doesn't feel so well, running a fever of 900 degrees. After Zoidberg fails to find anything, the Professor takes the opportunity to test his new invention, the F-Ray. The Professor's device allows the crew to see inside Bender and find the problem, Amy's watch. While the Professor takes his environmental suit to the decontaminators, he leaves the F-Ray with Fry and Bender "to be kept out of the wrong hands." They immediately start using it to see inside of things, including Fry and the beautiful "Fembot". At the 711 Fry gets an idea and they start to use the ray to search for the Slurm can with the winning bottle cap. They look inside hundreds of cans throughout the city. Back at Planet Express, where Leela and the Professor are playing 3-D Scrabble, Fry and Bender decide to give up. After declaring his disgust with Slurm, Fry immediately goes to the refrigerator and takes out some Slurm. He begins drinking but quickly start choking on the winning bottle cap lodged in his throat.

Fry and all of his friends arrive on Wormulon, and are greeted by Glurmo, who will lead them on the tour, and Slurms MacKenzie. Glurmo takes them inside the factory to a garden with Slurm cans plants, where they encounter the Grunka Lunkas, little people mixing the ingredients and singing across the Slurm river. Everyone gets on a boat and they see a mysterious door at the middle of the tour, which leads them to begin asking questions about the secret ingredient of Slurm. Fry notices the river they are navigating in is made of Slurm so he wants to drink it, he falls in and Leela jumps in to save him; Bender jumps as well, just to fit in. Sucked down the drain, they wind up lost in an underground part of the factory with the Slurm of the river pouring into a sewer. Fry tastes Slurm from the river, only to discover it's not Slurm at all, and they begin nosing around inside a tunnel where they see two doors marked "Real Factory" and "Fake Factory", which is the factory they had come from. Fry finally sees Slurm cans in a conveyor belt and immediately drinks it, but stops when they discover the disgusting secret - Slurm is a fluid squirted out by a giant worm: the Slurm Queen! Meanwhile Zoidberg, Amy, Hermes and the Professor finish the tour at the gift shop, and Glurmo notices that the others are missing so he decides to look for them, suspecting they had found the "Real Factory".

Despite knowing the secret, Fry continues drinking Slurm and Leela knocks the can out of his hand, which makes the Slurm Queen see them. They try to escape, only to run in a circle and wind up back in the room with the Slurm Queen, where Glurmo captures them. The Slurm Queen wants them destroyed so they can't tell anybody about the secret ingredient. Bender is to be made into Slurm cans, Leela is to be dipped into a vat of Royal Slurm, transforming her into a new Slurm Queen. Fry is allowed to go free after being force-fed a taste of concentrated Super-Slurm, which is so addictive he can't stop eating it, even to save his friends. Still eating, Fry doesn't know whether to continue or to save his friends. He drags the vat over until he can release Leela. She saves Bender, and then dumps the Super-Slurm down a sewer grate, to Fry's horror, so much so he tries to bite his arms off to fit through the grate. They make their escape, and run into Slurms MacKenzie, who wants to escape with them, saying he is tired of partying all the time. When the Slurm Queen finds them, Slurms sacrifices himself to allow the crew to escape with the babes he had partied with for 40 years. As the Planet Express crew escape on the ship, the Professor contacts the authorities, who vow to shut down the Slurm factory. Fry realises this would spell the end for his favorite drink, and so tells the authorities to ignore the Professor, saying that "Grandpa's making up crazy stories again." The Professor points out the truth - that Fry's really his uncle from the 20th century - but in doing so only makes himself look more insane, meaning that the factory gets to stay open. As the Professor grumbles, the rest of the crew and Slurms' babes end the episode by partying away and Fry enjoys the Slurm for him.

This episode was named #21 on IGN's list of top 25 Futurama episodes. 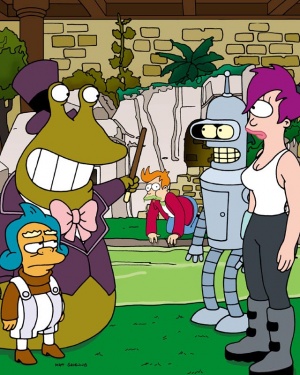 Advert Voice: Odds of winning mathematically insignificant.
Fry: Hey, I like those odds!

Amy: You should try homeopathic medicine, Bender. Try some zinc.
Bender: I'm 40% zinc!
Amy: Then take some echinacea, or St. John's Wort.
Prof. Farnsworth: Or a big fat placebo. It's all the same crap!

[Fry and Bender see a fembot walk by.]
Bender: Hold still, sexy lady. [Bender uses the f-ray on the fembot but is stunned.]
Fry: What's wrong?
Bender: That's no lady!
Hermaphrobot: Damn, chico! One more upgrade and I'll be more of a lady than you can handle! Why you so stoopid, stoopid?
Bender: Hey, bite my shiny metal ass!
Hermaphrobot: You couldn't afford it, honey!

Glurmo: [To the Grunka Lunkas.] Hey, I don't pay you to sing! You just used up today's bathroom break!
Grunka Lunka: Hard ass.
Glurmo: I heard that! [The Grunka Lunka whimpers.]

Fry: This is nothing. Back in high school, I used to drink 100 cans of cola a week, right up until my third heart attack.

Slurm Queen: As for you, you will be submerged in Royal Slurm, which, in a matter of minutes, will transform you into a Slurm Queen like myself.
Small Glurmo #1: But, Your Highness, she's a commoner. Her Slurm will taste foul.
Slurm Queen: Yes! Which is why we'll market it as New Slurm. Then, when everyone hates it, we'll bring back Slurm Classic and make billions!

Fry: What about me?
Slurm Queen: You are free to go.
Fry: Yes!
Slurm Queen: If you can resist this concentrated Super Slurm! [The Glurmos grab him and sit him in a chair in front of a tub. The Slurm Queen fills the tub with a dark green slime.] It's so delicious, you'll eat until you explode! Oh, which reminds me, put a cover over that sofa, will you? Bon appétit!

Time: 01:19
Location: Rules of the contest
Language: AL1
Translation: The following species are ineligible: space wasps, space beavers, any other animal with the word 'space' in front of it, space chickens, and the elusive yak-face.