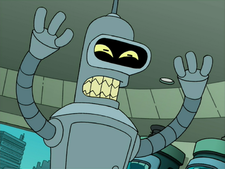 "Kill all humans" is one of Bender's catchphrases. It is an example of the dislike of humans that he shows throughout the show.

In The Beast with a Billion Backs, it is used as the motto of the League of Robots.

Bender: Here I've been blabbin' on for years about killin' all humans... and who actually does some' about it? Some chick.
[ItWGY]

Fry: You sure you don't wanna kill all humans?
Bending unit mistaken for Bender: Pfff! I love all humans!
[Fry whimpers.]
Fry: He really is gone.
[6ACV14] 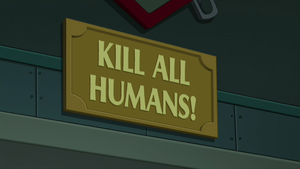 A plaque reading "KILL ALL HUMANS!", at the League of Robots' secret headquarters. [TBwaBB]