Cubert and Dwight, along with two other friends, are playing a game of Dungeons & Dragons when Bender walks in on them, unable to comprehend what they are talking about when they discuss what they are imagining out loud. Since he only sees the kids sitting around a table playing a game, the kids realize that he was not built with an imagination, which makes Bender feel a bit insecure.

Bender complains to Fry, wondering if he has an imagination; Fry simply tells Bender that he won't know if he can imagine something until he tries. All of a sudden, the ship's engines run dry of dark matter and shut down, stranding the ship in a backwater region of space. Fortunately, Nibbler poops out just enough fuel to reach the nearest Mombil fuel station. As Leela refils the tank and complains about how expensive dark matter has become, costing $9.99 a ball, she is approached by Sal who mocks the ship, calling it ugly despite the terrible shape his own ship is in. Sal proudly states this is so because he is a five-time winner of the Space Demolition Derby, and that he will be entering. Angered, Leela decides to enter the ship to teach Sal a lesson.

Returning to the Planet Express building, the crew is informed that with tripling dark matter prices, Farnsworth has forbidden the wasting of fuel, swallowing the keys to the ship and going to bed. Still unable to contain her anger about being insulted by Sal, Leela insists that they must enter the derby, even if the ship gets totaled, and has Zoidberg retrieve the keys from the Professr's stomach with a magnet. The crew blasts off to the derby arena.

At the derby, Leela unleashes her rage and concentrates on Sal's ship while the other ships demolish each other. Soon only their two ships remain, both charging headlong into a surefire collision course with each other...

Deciding not to take any risks, Sal admits defeat and swerves out of the way of the charging Planet Express ship, crashing and granting Planet Express a solid win. Returning to the building, the crew attempts to cover up the damaged ship with a curtain and puts the keys back into Farnsworth's stomach in his sleep. However, when Farnsworth awakens, he decides to take the ship to the malt shop. Leela orders Zoidberg to distract him by juggling torches while balancing on a ball, but he falls and burns up the curtain, exposing the ship's damaged shape. Farnsworth, however, does not notice the damage, only growing concerned when he sees that someone has wasted half a ball of dark matter, so Leela assumes full responsibility.

Meanwhile, Bender tries to play D&D with the kids, but is still unable to get the hang of his imagination. After some encouragement from Dwight, who tells him to lose himself in the fantasy, Bender convinces himself to believe that he is a medieval knight. Producing the image in his head, Bender proudly claims that he imagined something, and names his D&D character "Titanius Anglesmith, Fancy Man of Cornwood."

Leela is brought into the conference room to be punished over her severe anger issues. Because Zoidberg tattled on Leela to Farnsworth about all the things she did by letting her anger get the best of her, he is rewarded while Leela is forced to wear a shock collar, which activates every time she has a violent thought, swears, or has sexual perversions. Leela grows furious with Zoidberg and gets her revenge by electrocuting him, using Bender as a conductor.

Leela is informed that her collar can only be removed if she can convince Zoidberg that she has controlled her anger. After growing frustrated when Zoidberg tries to remove her skull to alleviate her anger, as well as spraying her with his empathy bladder, she declares that the source of her anger is her intense hatred of Zoidberg; Zoidberg, however, determines that it is truly rooted within her relationship with her parents (even though he is really thinking about his own parents). Zoidberg suggests that they both go visit them for dinner to work things out.

Meanwhile, Bender delves deeper and deeper into his own imagination to the extent that he be called "Titanius Anglesmith" everywhere. Disturbed, Fry turns to Farnsworth and tells him that Bender is playing too much D&D. Farnsworth warns Fry that if he doesn't confront Bender over this matter soon, Bender will completely lose his mind. By the time Fry does, it appears too late, and "Titanius" leaps into the city, attempting to destroy everything in sight, as well as stealing a bodyfull of dark matter from Nibbler's litter box as treasure.

At dinner with her parents, Leela shows Zoidberg that there is no problem with her relationship with them; however, they support the idea of the shock collar so she can control her temper. Fry comes into the house to warn them about Bender when he breaks in to terrorize them. Leela is unable to fight "Titanius" with her collar, so Fry "casts" a "Cone of Coldness" on him, duping him into believing he is frozen. Subdued, Bender is sent to the HAL Institute.

The episode ends with "End of Part 1". 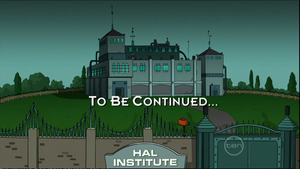 The only thing in the episode that's not in the film