A Big Piece of Garbage

"A Big Piece of Garbage" is the eighth episode of Futurama, the eighth of the first production season and the eighth of the first broadcast season. It aired on 11 May, 1999, on Fox. It guest-stars Ron Popeil as himself in a jar. After Farnsworth's development of the Smell-O-Scope, Fry discovers a giant ball of garbage heading directly for New New York, and it becomes a race against time to save the city.

Act I: "Tonight is a special night and I want all of you to be alive!"

Prof. Farnsworth tells the crew that they'll be making a delivery to Ebola 9, the Virus planet. He delays the delivery until the next day, so they will still be alive to attend the Academy of Inventors annual symposium and see him unveil his new invention, the Death Clock.

Act II: "The Smell-O-Scope is brilliant, I tell you!"

At the convention, Farnsworth is confronted by his old nemesis, Dr. Wernstrom. Wernstrom makes fun of Farnsworth's saying he will not be able to beat his invention. When he leaves, Farnsworth tells the crew that Wernstroom used to be one of his students and when he got an A minus from Farnsworth he vowed revenge, even if it takes a hundred years, but the professor now feels safe since 99 years have passed. Wernstrom presents his invention: the Reverse Scuba Suit, demonstrated by his pet fish Cinnamon. When it is Farnsworth's turn, he learns he had presented the Death Clock the past year, then he draws a prototype and presents his crude sketch of the Smell-O-Scope, a device that would allow you to smell distant objects, but the audience just laughs at him and Wernstrom wins the academy prize. The next day, he remembers that he already built a Smell-O-Scope last year, and with it Fry starts to smell at all directions. He discovers a bad smell which turns out to be a giant ball of garbage among the planets, headed straight for New New York. The crew watches a video that reveals that in the year 2052, Old New York launched a giant ball of garbage because of the accumulation in the city.

Act III: "New New York is going to be destroyed by a giant ball of garbage!"

Farnsworth runs to warn the Mayor of New New York about the ball of garbage. Wernstrom, acting as the Mayor's science advisor, denounces Farnsworth as a crackpot, until a report comes in from Neptune confirming Farnsworth's claims. A plan is prepared to send the Planet Express crew to plant explosives to destroy it. They fly to the ball but when they plant the bomb they discover the time goes very fast because Farnsworth installed the bomb's timer upside-down, then set it to to 52 seconds and not 25 minutes, and the crew has to dispose of the bomb so it won't blow them up, but this will doom the city.

Act IV: "Get that robot some more beer!"

Farnsworth is upset about his mistake. Wernstroom is called and claims to have a plan, but he is merely taking the chance to get some things he wants from the mayor. In desperation, they come up with an alternate plan: to deflect the garbage ball by hitting it with another garbage ball. Fry teaches them how to make trash and the people of New New York are called into action to start producing garbage. With guidance from Fry, they rise to the occasion and the new garbage ball is launched with a rocket. The plan goes off without a hitch, the original ball is deflected into the sun and Wernstrom's Academy prize is taken and awarded to Farnsworth instead. Leela comments that the second ball may come back to the Earth someday, but Fry remarks, "Who cares? That won't be for hundreds of years."

This episode was named #23 on IGN's list of top 25 Futurama episodes. 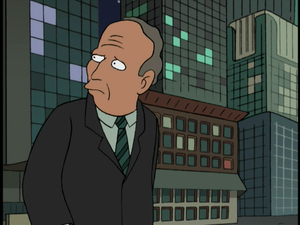 The man presumed to be Rudy Giuliani 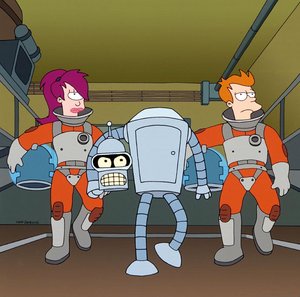 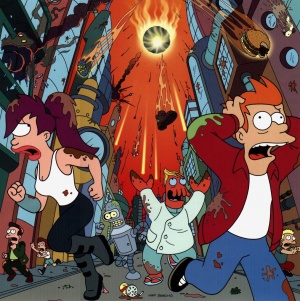 Farnsworth: I'm sorry, Fry, but astronomers renamed Uranus in 2620 to end that stupid joke once and for all.
Fry: Oh. What's it called now?
Farnsworth: Urectum.

Dr. Wernstrom: I give your invention the worst grade imaginable: An A-minus-minus.

Fry: Wow, you got that off the Internet? In my day, the Internet was only used to download pornography.
Farnsworth: Actually that's still true. [The two scientists on screen start to make out.]

Bender: There's your problem. The professor put the counter on upside down!
Leela: That idiot! It wasn't set for 25 minutes: it was set for 52 seconds!
Fry: [screams in terror] We're gonna die! [normal voice] Right?
Bender: Right! [Fry screams again.]

Linda: All in all, this is one day Mittens the kitten won't soon forget [Gives an empty-headed laugh.]
Morbo: [cackles malevolently] Kittens give Morbo gas! In lighter news, the city of New New York is doomed.

Mayor Poopenmeyer: On behalf of the entire city, I thank you, Professor Farnsworth. I now present you with the Academy Prize, which we confiscated from Doctor Wernstrom after it became apparent that he was a jackass.