"Bendless Love" is the thirty-eighth episode of Futurama, the sixth of the third production season and the sixth of the third broadcast season. It aired on 11 February, 2001, on Fox. It guest-stars Jan Hooks as Angle-ine. Bender finds himself working together with a fembot and ends up falling in love before he discovers that she is Flexo's ex-wife.

After a dramatic liftoff systems check, the Planet Express Ship crashes less than three seconds after takeoff. Leela files a lengthy report on the cause of the accident; sabotage is to blame for the accident. The L-Unit from the ship had been bent straight. Bender demonstrates what it should look like. The crew realizes that several other objects around the building have been mysteriously bent (or in the case of Zoidberg's slinky, unbent), including the Professor. Bender "fixes" him by bending him in the reverse direction. Amy realizes that Bender is a likely culprit for all the bent objects, and he denies it. Hermes reveals that he's got a huge archive of surveillance tapes. On one, it is revealed that Bender has been sleep-bending.

Act II: "I've been bending since the day I was built!"

Bender is shocked, but not surprised. After all, he was built to bend. He reveals that he was "born" four years ago, in the bad part of Tijuana. Leela infers that Bender hasn't been satisfying his need to bend, and the Professor demands he leave until he satisfies that need.

Robots are on strike outside Curvetti Bros. Bending Plant. The mob supports the union and the strike. Bender arrives and realizes that the strike may mean he won't be able to get a job. However, after learning that the company is hiring scabs at ten times the normal wage, he storms in and gets a job. Inside, he finds his "evil" twin Flexo working there, as well as Angle-ine, a female bending unit.

Outside, the workers continue to picket, while Bender and Flexo bend girders, and Angle-ine bends wire hangers inside. Bender makes a pass at Angle-ine.

Bender goes into work and flirts with Angle-ine. She says she's as strong as Bender, and he tells her to prove it, tossing her a girder. She struggles with it and is unable to bend it. Bender stands behind her and helps her bend it into the shape of a heart, and they kiss.

Bender takes Angle-ine to the fair and "wins" her a giant stuffed animal, and a wallet for himself. He also takes her out on a rowboat, letting his arms do the rowing. During a race with Fry and the Professor, Bender puts a stick in the Professor's spokes and wins the race.

Later, at the conference table, the Professor tells how his new, bent posture is helping his personal life. Bender arrives with Bender-related news: He's in love with Angle-ine, and takes his friends to Elzar's Fine Cuisine to celebrate. Bender tells the crew about Angle-ine, but Fry spots her across the room having dinner with Flexo. In rage, Bender grabs a piece of bread and attempts to bend it. After a warning from Elzar that it's a week old, the bread snaps. Then Bender's arms fall off.

Act IV: "It's time to kick some shiny metal ass!"

Bender confronts Angle-ine and Flexo, but Angle-ine explains that Flexo and Angle-ine are divorced, and having dinner because they want to remain friends.

Bender paces the lounge in the Planet Express building, worrying about the situation. Leela suggests he talk about his feelings with her, but Fry implies that might not be the manliest plan.

Bender then concocts a convoluted plan to catch Angle-ine cheating on him with... him (wearing a fake beard that looks like Flexo's). He calls her to set up the meeting, and then goes to The Hip Joint. He orders them drinks, and pays with the money he earned scabbing. However, the Robot Mafia sees this and is almost infuriated. Bender insults himself in order to pull off the con, but it doesn't work immediately. He takes her out on the dancefloor, and pays the DJ to play his request. The Robot Mafia sees this and is one step closer to attacking him. While dancing, Bender's fake beard comes off, and although he is almost caught, he dips Angle-ine to distract her. The robots in the club start dancing so furiously that their parts begin to fall off.

After the place is cleared out, Bender continues his scam, and Angle-ine starts falling for "Flexo" again. He escorts her out, and tips the valet. The Robot Mafia is now fed up, and plans to kill Flexo. Bender asks to go back to Angle-ine's place, and after some reluctance, kisses "Flexo". During the kiss, the beard comes off again, sticking to Angle-ine's face. She realizes the trick, and Bender explains his scam. She defends herself, but Bender is too dense to understand. Bender vows to kill Flexo.

Back at the Bending Plant, Bender assaults Flexo. The fight goes back and forth (after all, they are identical bending units), but the Robot Mafia is there planning to make their kill. Angle-ine makes a last desperate plea for them to stop the fight, but Bender persists. The Robot Mafia then drops an unbendable girder on Flexo, who is clamped. Angle-ine reveals her renewed love for Flexo, and in order to make Angle-ine happy, Bender tries to free Flexo from under the girder. With incredible exertion, Bender bends the girder off of Flexo. Then Flexo and Angle-ine have "sex right there on the factory floor".

Bender returns to Planet Express, and is relieved to never have to bend again. However, the crew is sick of the Professor's attitude, and they ask Bender to fix the Professor. He bends the Professor, but instead of making him upright, he bends him even further out of alignment, making the Professor depressed. 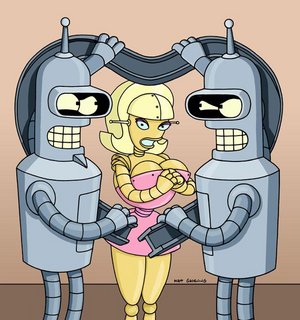 Fry: Wait! There on the screen! It's that guy you are!

Bender: This is quite a shock! On the other hand, it's not surprising in the least.

Robots: [chanting] No more bending, no more work. Give us a raise, you big fat jerk.
[Sal leans out of a window.]
Sal: [shouting] Nevers!