"Godfellas" is the fifty-second episode of Futurama, the twentieth of the third production season and the eighth of the fourth broadcast season. It aired on 17 March, 2002, on Fox. Bender is lost drifting in space after a space battle and Fry is determined to find him. Having played God, Bender runs into a godlike entity.

Just after the start to a new delivery, Planet Express Ship is attacked by Space Pirates. Bender is trying to get some much-needed sleep and is disturbed by the impacting cannonballs, so he searches some peace and quiet in the #3 torpedo tube. Unfortunately, Leela then orders Fry to fire a torpedo from this tube to deal a fatal blow to the Space Pirates, but instead, Bender, having occupied tube #3 during the attack, is hurled into deep space, carrying a bag of pirate swag he grabbed when he was shot through the pirate ship. Leela attempts to rescue him, but since the ship was traveling at full speed when Bender was launched, they are unable to catch up to him. Meanwhile, Bender tries to find a way to spend all of eternity with 'barely any swag' and drifts through an asteroid field where he is bombarded and finds himself with a little asteroid embedded in his chest. This asteroid is inhabited by the Shrimpkins, a race of tiny humanoids, who, upon emerging from the asteroid onto Bender's chest, recognize him as their god, addressed as "The Great Metal Lord."

Bender surveys his new worshipers, a race of humble farmers for the most part, and chooses one of the Shrimpkins, Malachi, to be his prophet. He lays down his commandments, or rather his commandment: GOD NEEDS BOOZE. Meanwhile, the Planet Express crew has returned to New New York and begins a search for Bender by means of the Smell-O-Scope. Unfortunately, Bender's odor is not strong enough to be picked up over such a distance, especially since local sources overpower it. In the mean time, the Shrimpkins have constructed a distillery to obey their god's wish. This created several problems: many Shrimpkins were maimed in the building of the brewery, the fumes from the distillery processes has accounted for many deaths, and the liquor industry attracted organized crime. Bender is moved by his worshipers plight and sheds a tear, which causes a giant tidal wave. Malachi Jr. is engulfed in it, and Bender saves him. This causes everyone to pray for their own miracles, and Bender causes more and more problems as he is trying to fulfill their wishes: a village is crushed by a quarter (they wanted riches), a field is burned down by intense sunlight (the farmers prayed for sun), and in an attempt to extinguish the field by blowing on it, many Shrimpkins are swept into space. On Earth, Fry is desperately looking for a way to find Bender in deep space, and he finally manages to find the Monks of Dschubba who search for God in the depths of space by means of a giant radio telescope in the Himalaya. In deep space, the Shrimpkin society is growing, and infidels are rising up because from their position on Bender's back he cannot hear their prayers. Malachi begs Bender to do something about the infidels, as they plan war against the faithful, but Bender refuses because every time he interferes, he only makes things worse. Fry and Leela mount an expedition to the monastery of the monks of Dschubba, while on Bender's body, things seem to go well with him not interfering in the dealings of the Shrimpkins. This ends quickly when the unbelievers and the faithful exterminate each other in a holy nuclear war, powered by Bender's nuclear pile.

Act III: "Who would have known playing God could have such terrible consequences?"

The Shrimpkins and their world are destroyed, and Bender laments their extinction. As he drifts through space weeping, he notices a galaxy signalling in binary code, and he signals back. The Galaxy picks up contact with him, and it turns out that it may possibly be God. Meanwhile, Fry and Leela reach the monastery. They try to persuade the monks to let them use the telescope, which they learn acts as a strong transmitter, to search for Bender. The monks refuse, but as they are at a strict non-violence policy, Leela locks them in the laundry room and they use the telescope anyway. Bender and the God Entity have a deep exchange about being God, and the Entity teaches Bender that being God is not easy at all, as he could plainly see during his time with the Shrimpkins. If you do too much, people depend on you, and if you do nothing, they lose hope explains the Entity. The right approach is a light touch, so that people won't even know you have done anything at all. Bender asks to be sent back to Earth, but the Entity says he does not know where Earth is. Bender is especially helpless in finding Earth, so he settles into the realization that he will be spending eternity with the Entity. After 3 straight days of searching, Fry decides to give up. In his last futile turn of the telescope, it points toward the Galaxy and transmits Fry's last words as he walks away 'I wish I had Bender back'. The Entity receives this transmission, straps a parachute onto Bender's back and flings him in the direction of the message. Bender lands just in front of Fry and Leela, who are leaving the monastery, which Leela says is the "least likely thing that has ever happened". Just then, they realize that they left the monks locked in the laundry room, and Fry wonders if they have to let them out. After all, their God might let them out...or at least give them more shoes to eat. Bender tells them that you can't count on God for anything, and that they will have to do it themselves if they want it done. The God Entity chuckles and says to itself 'When you do things right, people won't be sure you've done anything at all.'

In 2008, Empire placed Futurama 25th on their list of "The 50 Greatest TV Shows of All Time" and cited this episode as the show's best episode. The episode was also the #1 ranked episode in IGN's list of top 25 Futurama episodes.

Fry: You mean we can never catch up with him? Not even if we rub the engine with cheetah blood?!

Leela: Fry! If I drop dead from exhaustion, make sure my body freezes in a dignified position! None of that "huddled over for warmth" crap.

Galactic Entity: You were doing well, until everybody died.

Leela: This is by a wide margin the least likely thing that has ever happened!

Bender: Are you kidding? You can't count on God for jack. He practically told me so himself.

Bender: If even a pea-sized pebble were to whiz through my skull it could [Rock goes through his head.] Ow! Hurt slightly...

Galactic Entity: Possible. I am user-friendly, my good chum.

Bender: You're not gonna believe it. First I was God, then I met God.
Fry: We climbed a mountain and locked up some monks.

Leela: Your order may be famous for your martial arts, but I have never met a holy man I couldn't clobber.

Malachi: Smite someone who deserves it for once!

Bender: Uh, when you're writin' the Bible, you might wanna omit that last miracle.

Galactic Entity: When you do things right, people won't be sure you've done anything at all. 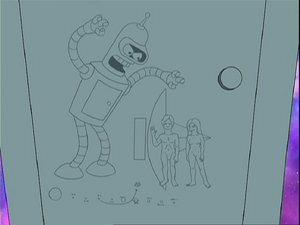