The Lesser of Two Evils

"The Lesser of Two Evils" is the nineteenth episode of Futurama, the sixth of the second production season and the eleventh of the second broadcast season. It aired on 20 February, 2000, on Fox. It guest-stars Bob Barker as himself in a jar. It is the first episode to be aired out of sync. After running into Flexo, another bending unit, Fry begins suspecting Flexo of being an evil version of Bender.

Bender, Fry and Leela are watching Cop Department when an advertisement for Past-O-Rama appears on the television, Bender wishes to see a time before life was cheapened by heartless machines. They look around Past-o-rama at various attractions such as a telephone booths and Al Sharpton’s burial chamber. Then, they come across a ancient car, and Fry attempts to drive it. He is unable, and he instead takes it through a wall. Unable to stop, they hit Flexo, a bending unit with a beard.

The crew are nervously pacing around while Bender is looking at a robot pornography book and Flexo is successfully fixed. Flexo and Bender find that they like each other immediately. They take Fry to a robot gentlemen's club where they pay a robot to give Fry a lap dance which results in injuries. Due to this, Fry begins to think Flexo is evil. The crew go into the Professor's bedroom at his request. He reveals to them the atom of Jumbonium which is so expensive, that if stolen it will cause Planet Express to go bankrupt. Due to this, the Professor hires Flexo to help the Planet Express Crew deliver it, despite some resistance from Fry.

Bender, Flexo, and Fry take turns watching the atom in that order. Fry distrusts Flexo, so he watches Flexo during Flexo's turn to watch the atom. Fry falls asleep during his watch due to this. When the ship lands they discover the atom is gone, and they begin to search for Flexo. Fry believes he stole it and starts watching Bender who is all the time covering his chin with different things. Due to this, Fry suspects he could be Flexo covering his beard. However, he soon learns that it was Bender anyway. They can't find find Flexo so they tell Bob Barker's head and he orders them to find the atom. When they finally find Flexo, he and Bender begin to chase each other through the beauty pageant but Leela doesn't know who is Flexo because they're covering their chins and Flexo's beard can't be seen. Later it is revealed that Bender in fact stole the atom, and not Flexo. Flexo saw Bender steal the atom and ran to tell Bob Barker's Head. The atom is returned; however, Barker mistakes Flexo for Bender, and Flexo is locked up in Bender's place. 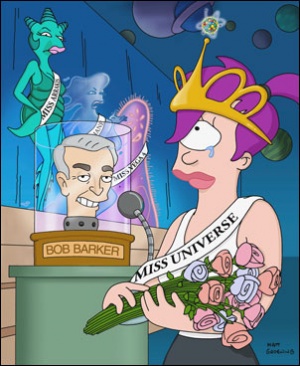 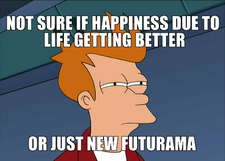 A screenshot of the advertisement for season 7 aired by Comedy Central showing a meme based on a Fry scene from this episode.

Speaker: ...The stately 1992 Latura.
Fry: Hey, my girlfriend had one of those! Actually, it wasn't hers, it was her dad's. Actually, she wasn't my girlfriend. She just lived next door and never closed her curtains.
Leela: Fry, remember when I told you about always ending your stories a sentence earlier?

Bender: I think I got whiplash!
Leela: You can't have whiplash, you don't even have a neck.
Bender: I meant ass whiplash!

Fry: He must've used a sleep-ray on me! Sleep-rays exist in the future, right?
Leela: No.
Fry: Oh. Then I must've fallen asleep.