"A Clockwork Origin" is the ninety-seventh episode of Futurama, the ninth of the sixth production season and the ninth of the seventh broadcast season. It aired on 12 August, 2010, on Comedy Central. Professor Farnsworth, fed up with Creationists in New New York, moves to a planetoid to escape the ignorance of humanity, only to inadvertently create mechanical life which evolved from small robots designed to clean tainted water on the rock. The crew goes with him, but leaves Zoidberg and Cubert on Earth.

The Professor travels to Wozniak Nerd Academy, where evolution is being questioned.

Act I: "I don't want to live on this planet anymore."

Professor Farnsworth finds out that his clone Cubert was unable to go to school due to the large mob of Creationist protesters outside. Outraged, he quickly takes the Planet Express Ship to Cubert's school, the Wozniak Nerd Academy. Once there, the Professor gets into a huge argument with the protesters and meets a talking orangutan called Dr. Banjo. The doctor claims that if evolution was possible, then there wouldn't be a "missing link," in the chain between the Great Apes and Homo Sapiens. The Professor aims to prove him wrong and has the crew fly to Olduvai Gorge in Africa to find the missing missing link. While in the gorge, Farnsworth finally finds the fossilized skull of a previous unknown hominid that fills in the gap. He names it Homo farnsworth (which is a misnomer, since the hominid was too far back in the chain to actually be from the genus Homo), and takes it back to display at a museum. However, at the museum, Dr. Banjo returns and convinces the patrons that the Homo Farnsworth actually disproves evolution. Upset at everybody's ignorance, he makes the crew (except Zoidberg who stayed on Earth to take care of Cubert) drop him off at a lifeless planetoid where he will spend the rest of his days with only an inflatable shack, four grand pianos, and some pizza. He pours some Nanobots he invented into a nearby pond to eat up all the toxic minerals and give him a fresh source of water. However, before the crew could leave, the nanobots evolve into land mobile Trilobots, which eat the entire Planet Express Ship, thus trapping all of them on the planetoid.

On the Robo-Planetoid, a micro-evolution sets off.

Act II: "Look out for the next thing!"

The crew run into a nearby cave to hide from the matter-eating Trilobots. Having no edible pizza (due to all the pizzas having pineapple on them), the only food they have left is some dehydrated steak that the Professor brought, but they need water. The crew run out of the cave to get to the pond, only to find that the Trilobots have gone and a huge robotic jungle is now growing. They eat some steak, but are then attacked by Robotic versions of Plesiosaurus and Tyrannosaurus Rex, which the Trilobots evolved into, but a Tricycletops saves the crew. Fry is dragged off by a robotic pterodactyl, while the rest are ambushed by a robotic Dimetrodon and the same robotic Tyrannosaurus Rex. However, they are all saved by a magnetic solar flare, which destroys all the robot dinosaurs, but was harmless to any biological beings, as well as smaller robots, hiding in caves, such as Bender. The Professor manages to build a new spaceship out of the parts of the dinosaurs, but they must wait to the next day to use it since it is solar powered. However, Leela and Amy are kidnapped by Robo-Cavemen. Meanwhile on Earth, Zoidberg is trying to take over as a father figure for Cubert, but is constantly put down by him. Cubert feels bad about this, so he goes to Zoidberg's dumpster and apologizes, saying that he makes fun of people because he is always getting picked on by bullies. Brett Blob shows up and threatens to beat the two of them up, but Zoidberg protects them by pretending to be as pathetic as possible. In doing so, he gains Cubert's respect.

Act III: "You're under arrest for crimes against science."

The next morning on the planetoid, the crew wake up to discover that Leela and Amy have been captured by robo-cavemen and forced to be their wives. Professor Farnsworth is able to make a slingshot but because it took him twelve hours to do so, they must spend another night on the planetoid before they can rescue the women. However, once they get up, they find that Amy and Leela were already free of their own means and that the cavemen dissappeared. They then meet a fully evolved, sentient, humanlike robot named Dr. Widnar who discovers them as the first carbon-based lifeforms that their society has ever seen. She takes to their Museum of Natural Robo-History, where the Professor gives a speech. However, when he reveals that he invented the nanobots in the first place, he is arrested for speaking against evolution and believing in creationism, and is put to a trial. At the trial in the Superior Gort, Bender replaces Leela as Farnsworth's lawyer and claims that Farnsworth is innocent by terms of insanity. It then all comes down to the jury's opinion, which they wouldn't have decided until the next day. The crew are forced to sleep in the Gort. The next day, the crew discovers that all the robots have further evolved into highly intelligent Robotic gas forms. The gas forms believe that all physical lifeforms are yokels compared to them and that the trial they had was pointless in the grand scheme of things. They allow them to leave the planetoid. Once they return to Earth on the ship made of dinosaur parts, Farnsworth talks to Dr. Banjo and show him holographic pictures he took of the evolution on the planetoid, to prove that it is possible for small lifeforms to evolve into more complex ones. Dr. Banjo counters in saying that evolution on the planetoid was in fact put into action by an intelligent creator: Professor Farnsworth. In the end, they compromise on the fact that both their theories are feasible.

The idea for the episode originated at the time around the 200th birthday of Charles Darwin, the scientist who proposed the theory of evolution. At the time, Kirk Cameron, a creationist and evolution denier, was releasing altered versions of Darwin's book On the Origin of Species, containing false information on Darwin and his theory in a new introduction, and having removed several key chapters of the book. Dan Vebber decided to write "A Clockwork Origin" to "undo all the damage [he] did".[1]

In its original American broadcast, "A Clockwork Origin" was viewed by an estimated 1.926 million households nearly identical to "That Darn Katz!" [2]

Farnsworth: As a scientist, I can assure you that we did in fact evolve from filthy monkey-men.

[The Trilobots cannibalize the ship while the crew look on in shock.]
Leela: Oh, no! My sunglasses were in there!

Bender: [He walks up to the Professor, wearing an under-sized Tuxedo.] Hmm, my tux doesn't fit. Probably because I've grown so much since I last wore it, or evolved, one might say.
Farnsworth: One might not say that! Your tux doesn't fit because you stole it from a boy!
Bender: You mean a man! It was his Bar Mitzvah.

[The robo-cavemen grunt at them and drop a broom in front of Amy and Leela.]
Amy: I think they want wives, so just play along. If it doesn't work out, we'll still get half their rocks.
Leela: I can earn my own rocks! Also, I don't want any rocks! 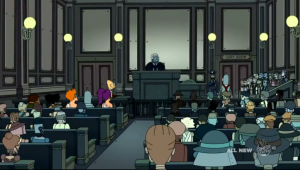 Bender is seen twice in the same frame