I Dated a Robot

"I Dated a Robot", originally titled "J-Lo Dolly", is the forty-seventh episode of Futurama, the fifteenth of the third production season and the fifteenth and last of the third broadcast season. It aired on 13 May, 2001, on Fox. It guest-stars Lucy Liu as herself in a jar as well as robot versions of herself. Fry downloads Liu's personality illegally onto a "blank robot", and they start dating. The discontent of the others leads to an investigation, which reveals the sinister nature of the corporation providing the celebrity personalities.

Act I: "I want to see the edge of the universe!"

The crew is watching The Scary Door, Fry enters to try to convince them that the future is far better than his time. They decide to do (almost) everything Fry ever dreamed of. After blowing up a planet, travelling to the end of the universe and riding a dinosaur, Fry decides the last thing he wishes to do is to be romantically linked with a celebrity.

Fry and Leela go online and locate nappster.com, where Fry chooses to download Lucy Liu. The download is successful and Fry falls for the Liubot.

The crew considers the relationship sick. They try to make him end the relationship, and show him a propaganda film which shows that humans dating robots will lead to disaster. The film has no effect on Fry, who is busy making out with the Liubot. Leela, Bender and Zoidberg head off to shut down nappster.com, where it is revealed that the company (secretly known as kidnappster.com) is holding various heads in jars hostage in order to scan them to create the robot duplicates, Liu having been there 800 years. The three rescue Lucy Liu's Head and escape. Kidnappster sends Liubots to kill them.

The real Lucy Liu is apparently attracted to Bender. A swarm of Liubots begin attacking. They hide in a movie theatre, where they find Fry and his Liubot on a date. The swarm enters and continues its rampage. Fry leads Bender, Leela, Zoidberg, Lucy and his Liubot to the projection room. The Lius prepare to enter through the window, but are stopped by a huge quantity of popcorn, until the swarm begins shooting the popcorn back.

Fry's Liubot sacrifices herself to destroy the others and save Fry. Bender and Lucy admit their feelings for one another, much to Fry's disappointment. 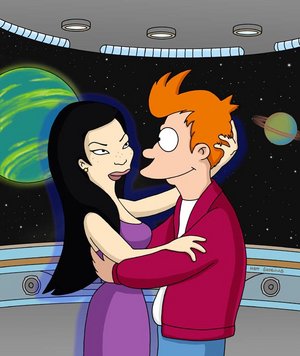 Fry: Oh, Lucy! You're just like I always thought you'd be from your movies.
Liubot: My personality is mathematically derived from my movies, proportionally weighted by box office receipts.
Fry: Aaawww... you say the CUTEST things!

Fry: Far out! So there's an infinite number of parallel universes?
Farnsworth: No, just the two.

Fry: Oh, well, I don't care if it was some dork in a costume. For one brief moment I felt the heartbeat of creation, and it was one with my own.
Amy: Big deal!
Bender: We all feel like that all the time. You don't hear us gassin' on about it.

Leela: They're forming a human pyramid of robots!

Fighting Liubot: I am Lucy Liu give me your spines!
Zapp Brannigan: Now that's a wave of destruction that's easy on the eyes!
Liubot: I'll always remember you. [Robotic voice.] MEMORY DELETED!