The Devil's Hands Are Idle Playthings

"The Devil's Hands Are Idle Playthings" is the seventy-second episode of Futurama, the eighteenth and last of the fourth production season, the sixteenth and last of the fifth broadcast season and the finale of the original run. It aired on 10 August, 2003, on Fox. It guest-stars Dan Castellaneta as the Robot Devil. Fry makes a deal with the Robot Devil so he can become a skilful musician and win Leela's heart.

Act I: "Mr. Bender, I simply cannot teach your child!" 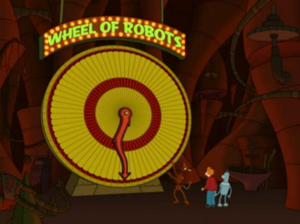 The Wheel of Robots

Fry is desperately trying to learn to play the Holophonor, as he once almost won Leela's heart with it. He begs Bender to come and attend his Holophonor recital, and Bender graciously agrees. However, Fry is still very inexperienced, turning his recital into a disaster. This leaves Fry depressed because he can imagine great music, but is not capable of playing it. Just then, Leela tells him that she has a soft spot for men with creative musical talent, like her ex-boyfiend, Sean, and his saxophone. Bender suggests that Fry should cut a deal with the Robot Devil in order to learn to play the Holophonor. Fry agrees and they travel to Robot Hell and confront the Robot Devil, who tells Fry that he has "stupid fingers", which can't even master a belt buckle. He suggests that Fry takes a pair of robot hands to replace them, and leads them to a big wheel of fortune called "Wheel of Robots", containing every robot in existence's name. The wheel lands on the Robot Devil (positioned next to Bender's), who reluctantly replaces his hands with Fry's.

Act II: "I'm back from Hell, and I've got the Robot Devil's hands!"

With his new hands, Fry easily masters the holophonor and soon becomes a star. He even makes his own records and plays in public at Hovercar-negie Hall. Leela is genuinely touched by the beauty of his music. The Robot Devil is desperately trying to get his hands back, but Fry refuses to give them back. Meanwhile, Hedonism Bot asks Fry to write an opera for him, and Fry agrees, provided that he can write it about Leela. He begins his work, and Leela is very impressed by his creative talent, but Fry doesn't want her to hear the opera until it's done. Meanwhile, the Robot Devil cuts a deal with Bender, installing on him a stadium air horn, taking his crotch plate in return. This allows Bender to fulfill his wish of being more annoying. Bender tries out his new function on the first person he sees, Leela. The blast is so loud, she is deafened, the night before Fry's big concert. This is just what the Robot Devil had hoped for--a bargaining chip to use against Fry in return for his hands. Bender tries to use his catchphrase, but realizes that he just traded his "shiny metal ass" to the Robot Devil.

Fry's opera, Leela: Orphan of the Stars, has its grand premiere in the Metropolitan House of Opera, attended by a huge audience. As she still can't hear, Leela begs the Planet Express crew not to tell Fry that she is deaf, because she fears it would break his heart, so Amy uses Emotion Flashcards to show Leela what she is supposed to feel when Fry sees her. The first act, dealing with Leela's past, is a great success. During the intermission, Leela decides that she would give anything to hear the rest, which plays right into the Robot Devil's plans. He agrees to grant her new ears in exchange for her hand, which she accepts, and is given Calculon's ears. The Robot Devil tells her that he will come back for the hand at a later time because the intermission is about to end and he does not want her to be late for the rest of the opera. During the second act, portraying Fry's deal with the Robot Devil, the real Robot Devil makes a personal appearance on the stage, confronts Fry and demands his hands back, or he will take Leela's promised hand—in marriage. Fry is desperate, as his skill with the holophonor (and his ability to impress Leela) lies in his new, robotic hands. Without them, he will not be able to complete the opera he wrote to win her heart. In the end, he decides to give up the hands so that Leela may go free. Left with his old hands, he is unable to play with any amount of skill, and the opera is a flop causing the entire audience to leave angry and disappointed. Just as Fry is about to sadly leave the empty stage with his holophonor, he hears Leela in the distance as she says Please don't stop playing Fry. I want to hear how it ends. He then turns and sees Leela as the only person left in the audience, smiling. Fry, happy to see she has remained, sits down and finishes by managing to play a simple but sweet tune, and the holophonor creates crudely drawn versions of Fry and Leela which kiss and hold hands before walking off into the distance, together.

This episode was named #22 on IGN's list of top 25 Futurama episodes.

Bender: [Looking at signs that tell him to keep him out of Fry's room.] I choose to not understand these signs.

Bender: You know what always cheers me up? Laughing at other peoples misfortunes! [laughs]

Bender: Fry, if you don't take this offer right now, I will lose all respect for you and punch you.

Bender: [Watching the Wheel of Robots spin.] I got a hundred bucks on Rectal-Exam-Bot!

Hedonismbot: Courtesans and gentle fops, I bid you welcome to my opera. Let us cavort like the Greeks of old. You know the ones I mean.

Zoidberg: [As Fry enters the stage.] I watch TV with that guy!

Hedonismbot: [As the Robot Devil chops off Fry's hands.] Surgery in an opera? How wonderfully decadent! And I was just beginning to lose interest. Jombee, the chocolate icing! [Servant covers him in chocolate.] Oh! Oh my, yes!

Leela: [touching Fry's robot hands] Aah! They're so cold!
Robot Devil: [off screen] AND YET HELL IS SO HOT! [laughs] Can I have my hands back now?
Fry: NO!
Robot Devil: [whining] YOU'RE NOT NICE!

Hedonismbot: Less reality, more fantasy. Resume the opera!
Fry: But I can't play anymore!
Zoidberg: Yes you can! The music was in your heart, not your hands!
[Fry begins playing off-key and the audience starts booing.]
Zoidberg: Your music is bad and you should feel bad!

Hedonism Bot: A man writing an opera about a woman? [giggles] Oh, sirrah, how deliciously absurd!

Robot Devil: You can't just have your characters announce how they feel! That makes me feel angry!

Leela: Please don't stop playing, Fry. I want to hear how it ends.

Bender: I don't recall ever fighting Godzilla, but that is so what I would have done!

Characters on the wheel of robots