As Bender is being treated for his inability to distinguish fantasy from reality, Farnsworth watches the news with contempt as Mom is interviewed about the recent dark matter shortage. She explains that she has been investing so heavily on her dark matter mine in Alaska that she claims to be losing money, despite having made record profits last quarter. As it turns out, there is no shortage; it is all a ploy Mom is using to boost her fortunes on heightened prices.

With the crew curious as to why the Professor is so upset about the ordeal, the Professor reveals that while he was working for Mom for the third time (having twice realized how evil she is and vowing never to work for her again), he was experimenting with dark matter which, at the time, was a completely useless substance. Placing several balls in a particle accelerator, the experiment produced a red, glowing energy crystal which turned all dark matter in existence into fuel. He presented it to Mom, who promptly decided to get back together with her ex-husband Wernstrom and took the crystal for herself, firing Farnsworth. Farnsworth adds that, at the same time as the energy crystal, he produced an opposite crystal which he kept hidden from Mom. He explains that if the two crystals should come in close-enough range with each other, their effects on dark matter would negate, rendering dark matter useless and allowing scientists to care enough to produce new fuel, as well as ruining Mom's dark matter empire. However, he now believes the anti-crystal to be lost forever, little realizing that it was found and is currently being used by Cubert and Dwight as a 12-sided die in their Dungeons & Dragons game.

Farnsworth develops a method that will allow him to locate the missing anti-crystal: he has invented a device that causes the crystal to emit a foul odor, allowing him to sniff it out with his smelling aid. However, this ends up alerting the presence of the crystal to Mom's attention, since she had actually known about its existence for some time. Realizing what this could mean for her dark matter empire, she sends her sons Walt, Larry, and Igner to the Planet Express building to obtain it.

Disguising themselves as owl exterminators, Walt, Larry, and Igner bumble their way through locating the anti-crystal while the kids are using it. Farnsworth, who is not convinced by their moronic display, unleashes an owl after them, exposing their identities and allowing him to find the anti-crystal.

With the anti-crystal in his possession once more, Farnsworth, Fry, and Leela set out with it to Mom's dark matter mine to put an end to her plans. Mom places Walt and Larry in command of her army of killbots, claiming that Igner alone cannot be trusted. She decides to tell Walt and Larry a shocking truth about Igner she has never told anyone, which Igner overhears. Meanwhile, Bender, still believing himself to be Titanius Anglesmith, is unfazed by all methods of therapy and declared insane, scheduled to be lobotomized.

Under relentless fire from the killbots, the ship is shot down and crashes before it can make it past the mine's outer defenses; however, as it turns out, the crew was not on the ship to begin with, having used it as a decoy while they infiltrate the mine on foot. Narrowly avoiding waves of killbots sent after them, the crew enters the heart of the mine where they are shocked to discover countless Nibblonians defacating dark matter in cages. They realize that the facility isn't a mine, but a farm. 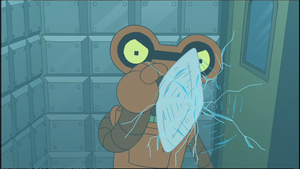