I Second that Emotion

"I Second that Emotion" is the fourteenth episode of Futurama, the first of the second production season and the fifth of the second broadcast season. It aired on 21 November, 1999, on Fox. After flushing Nibbler down the toilet, Bender is forced to install an empathy chip. He ends up being upset about Nibbler, and starts an expedition to save him. This leads the crew through the sewers to the monster that is El Chupanibre.

Act I: "How could you flush Nibbler down the toilet!?"

The episode begins with Leela opening a can of Kibbles 'N' Snouts for Nibbler. After she leaves the can opener on, Bender gets attracted to it and the result is that his antenna is almost severed from his head. After Nibbler breaks a fang while literally biting Bender's shiny metal ass, they have to take him to the vet to get a new tooth. He receives a replacement tooth from the vet. The vet speculates that Nibbler may be 5 years old, so the crew throws him a birthday party. Bender, jealous of the attention Nibbler is getting, bakes an amazing cake stating Bender is great, which Nibbler eats before anyone can see it. In anger, Bender flushes Nibbler down the toilet.

Act II: "There's mutants down there!"

Leela is inconsolable. Everyone sees that Bender is completely incapable of understanding empathy, so the Professor equips him with an empathy chip that "allows" (i.e. forces) Bender to feel all of Leela's emotions as she feels them--and not just sadness, but happiness, anger, jealousy and fear. Unable to bear the pain (and fed up with feeling the emotions), Bender flushes himself down the toilet to go hunt for Nibbler. In spite of the urban legends about a race of hideous mutants who live there, Fry and Leela enter the sewers to search for Bender. After finding him they realise they are lost, and while trying to find a way out they run into the dreaded sewer mutants.

Act III: "Aren't you supposed to be eating our brains?" 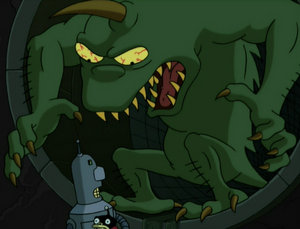 The Mutants turn out to be harmless and take them to their city, telling the legend of a dreaded monster known as El Chupanibre. Leela begins to wonder if Nibbler is the monster, so the mutants, not wanting to take any chances, use her as bait to capture the monster. Nibbler soon appears, but the mutants confirm that he is not the monster--in fact the real El Chupanibre, a huge, vicious, drooling monster, is right behind him. Bender attempts to fight it off, but Leela's fear and sense of concern for Nibbler's safety hinders him. In order to defeat the monster, Bender convinces Leela to act heartless and self-centered, giving him the capacity to knock him into the giant toilet and flush him into the sub-sewer.

Back at the Planet Express building, the Professor removes the empathy chip and sees that it was actually damaged, apparently indicating Bender's emotions were real, only to correct himself when he sees that it was actually running at three times normal capacity. Bender has learned nothing and leaves, but Leela claims that she herself has learned from him and leaves the room with a curt "So long, jerkwads!" 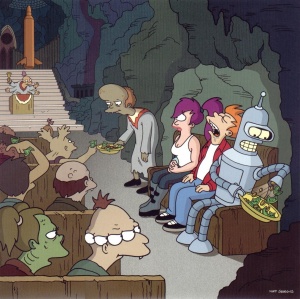 Calculon: Give it to me straight, doctor. Don't sugar-coat it.
DoctorBot: All right. Your entire family died when a plane piloted by your fiance crashed into your uninsured home, and you have inoperable cancer.
Bender: [laughs hysterically] Bet you didn't expect that one, Calculon!

Fry: Leela, your 'scaredness' is being transmitted straight to Bender. If you care about Nibbler, stop caring about him!
Leela: I can't. I love every living creature.
Fry: Even me?
Leela: As a friend.
Fry: [dissapointed] Damn.

Raoul: Let's have a tissue tape parade!
Bender: No, thanks!

Fry: Uh-oh. Is this going to be another experiment that crosses the line man was not meant to cross? [Professor Farnsworth signals "a little."]

Bender: So its a cake you want, is it? I'll make you a cake you'll never forget.