"Three Hundred Big Boys" is the seventieth episode of Futurama, the sixteenth of the fourth production season and the eleventh of the fifth broadcast season. It aired on 15 June, 2003, on Fox. It guest-stars Roseanne Barr as a hologram of herself. When each Earthican recieves a three hundred-dollar government refund, the Planet Express crew members pursue their respective dreams and desires.

Act I: "I've sent you each 300 buckaroos in the form of a Tricky Dick Fun Bill! Knock yourselves out!"

Zapp Brannigan has led Earth forces to victory over the 'weak and woman-like' Spiderians of Tarantulon 6 and seized plenty of spoils: one trillion dollars in silk and treasure. Richard Nixon's head decides to refund the surplus to the taxpayers, meaning that every citizen of Earth gets three hundred dollars. The crew have already acquired their shiny new $300 bills and now wonder what to do with them. Leela decides to swim with a whale, while Scruffy gets a $300 haircut as his current one has lost its "pizzazz." Zoidberg wants to live like a rich man, while Fry decides to blow it all on a hundred cups of coffee. Brannigan calls to invite the crew to a special reception and display of the National Silk Surplus. All of New New York is celebrating the newly acquired riches, while Kif and Amy enjoy a ride on a paddle plane Kif rented with his tax rebate. Amy has spent her money on a talking tattoo on her upper right arm. Meanwhile, Professor Farnsworth visits GeneWorks, S.K.G. to acquire one pound of stem cells to fight his ageing process, but the effects will be temporary. At the same time, Bender visits Hacking Jack's Fine Smokables in search of the ultimate smoke and feasts his eyes on the Le Grand Cigar. Unfortunately it costs $10.000, so Bender gets a few burglar's tools for $300 instead for later use. Hermes has bought his son Dwight a set of Bamboo Boogie Boots, a kind of powered stilts, which Dwight is not too happy with. Hermes demonstrates them and loses control. Dwight tries to save his father but is stuck up the stilts with him, resulting in the two of them roaming the city completely out of control. 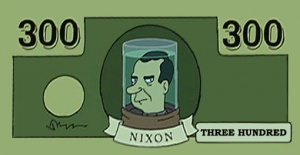 The Professor leaves GeneWorks looking somewhat younger and instantly falls for a young lady dressed in leather, while Zoidberg is looking into diamonds but can't understand what people like in shiny pebbles. Leela has reached the aquarium and is booking a swim with Mushu, the pygmy sperm whale, while Fry is on his second cup of coffee (whale size) at Starfishbucks Coffee. Kif presents Amy with a special gift, a watch that has two sets of hands to show the time wherever Kif and Amy are. As she leans to greet Fry and Leela she sees passing underneath, the paddle plane swerves out of control and the watch falls into the pool of Mushu, who swallows it.

Kif is down in the dumps, but Leela and Scruffy have an idea to recover the watch. Fry, Leela, Kif and Amy visit Elzar's Fine Cuisine (Fry being at cup #31), and Leela sneaks into the kitchen and pulls the plug of Elzar's fresh fish freezer. At the same time, the Professor and his newly aquired love share a table at the same restaurant (she believes he's 25), and Zoidberg is not happy with Paté de Foie Gras and caviar and refuses to pay. Meanwhile, Bender is breaking into Hacking Jack's to steal the Grand Cigar, but is spotted by a surveilance camera and Smitty and URL take up the hunt. The next morning, Elzar disposes of the now rotten fish into the nearest dumpster, where it is eagerly awaited by Leela, Amy and Kif. Bender is now hanging out at Guadalajara Brown Drip Gourmet Coffee with Fry (now at cup #52), who is showing strong signs of caffeine intoxication. Bender intends to save his new illegally acquired stoagie for the party that night, as it's too fine to blow its smoke in just anyone's face. Leela is having her meeting with Mushu and has stuffed her swimsuit full of rotten fish to make Mushu first eat it and then barf, freeing Amy's watch. Everything goes as planned, but as Mushu turns out to be rather hungry, Leela ends up minus a swimsuit and has to acquire a makeshift dress made from a warning banner. Zoidberg is trying to play golf like rich people do, but finds it unsatisfactory, partly because the golf clubs can't resist his claws and the golf balls are tasteless. Leela's plan works out and Mushu barfs bigtime, releasing both the watch and Leela's swimsuit. Kif dives into the pool and gets covered all in whale vomit, but retrieves the watch. However, the Whale Biologist sends Smitty and URL to arrest him because he has got aquarium property, which works in Bender's favour by allowing him to escape, as Smitty and URL were after him for the cigar heist.

The reception at the presentation of the National Silk Surplus is going quite well. All of the high society attendees, including Richard Nixon's head, Zapp Brannigan, Mom and her sons, Mayor Poopenmeyer and a lot of other celebrities and important persons.

Zoidberg tries to aquire one of the tapestries, but finds it overpriced at $1 billion. He realizes that even with $300 he is still desperately poor and that money brought him no happiness. Fry has arrived at cup #99 and is shaking uncontrollably, and Bender deems the time has come for the lighting of the Grand Cigar. Amy is sad because Kif is in jail, and Scruffy is trying to comfort her. Meanwhile, in Commander Riker's Island Jail, Kif is told that he is not imprisoned for taking the watch but for being covered in ambergris, a precious substance found in the digestive tract of the sperm whale and used to make perfume. As he is covered in the stuff, Kif sheds his skin and rushes to join the reception. He even brings Amy a flagon full of ambergris, which she embraces at once.

The Professor's stem cells lose their youthesizing power, and he reverts to an old man. He finds that his love has used her tax rebate to enhance her looks a bit too; in reality she is (in his words) "fat as the queen of sea cows". The two of them resume making out, as they now know the other's true looks. Hermes and Dwight, still on the Bamboo Boogie Boots, stagger in through a window and knock the Grand Cigar from Bender's hand onto a tapestry of Zapp's conquest, ultimately setting all the silks ablaze.

Everyone is in mortal danger, but Fry doesn't notice as all he can think about is coffee. He drinks his 100th cup and enters an enlightened state in which time seems to slow to a crawl while he moves normally. Moving at incredible speed, he calmly carries everyone out of danger and extinguishes the fire. Leela attributes the rescue to an "orange blur."

Outside, Zoidberg has joined a few hobos and found out how money could make him happy: by buying a meal for his new friends. Everyone joins them, and Hermes gives the penny left from the purchase of the Boogie Boots to Dwight, who decides to invest it in five shares of Amazon.com (which Hermes considers to be a risky investment, to his joy). Richard Nixon's head is angry because the entire surplus has burned away, but everyone else is happy because the tax rebate at least resulted in a few mildly interesting stories. Bender, a bit disappointed that his story "petered out at the end," is finally seized by URL and Smitty and beaten up, giving his story the closure he craved.

This episode was named #20 on IGN's list of top 25 Futurama episodes. 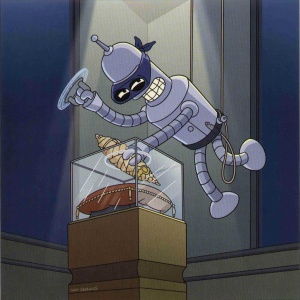 Bender: What to do, what to do? One $300 hookerbot or three hundred $1 hookerbots?

Morbo: [As his wife adjusts his tie.] Stop it, stop it. It's fine! I will destroy you!

Hermes: [Referring to the Bamboo Boogie Boots.] With a warning label this big, you know they gotta be fun!

Dwight: [While clinging to Hermes' back as they careen around town on the Bamboo Boogie Boots.] Waaaah! I wish I had two mommies!

URL: [Watching Mushu vomit.] It just keeps comin' and comin'... [Bender sneaks past him and Smitty.]

Zoidberg: What? It's not even scratch and sniff? But if rich people think it's good, I'll buy it. One art, please!