"Fry and Leela's Big Fling" is the one hundred and thirty-first episode of Futurama, the seventeenth of the seventh production season and the second of the tenth broadcast season. It aired on 19 June, 2013, on Comedy Central. Fry and Leela's romantic vacation goes disturbingly wrong.

Act I: "Why is it so impossible for two people to be completely alone?"

At the end of the day at Planet Express, the crew take their leave of each other in the locker room. Fry and Leela make a big show of seeming to go their separate ways, but after everyone else is gone, the two emerge from hiding places and attempt to begin a romantic evening together. Interrupted by Scruffy, they realize that they can't really be alone here, so they leave. They share a nice walk in a deserted part of Central Park until Bender attempts to mug them. They beat him up and steal all of his mugging loot. Unable to have a night out completely alone, they settle for a quiet table at Elzar's restaurant. Here, Zoidberg, at his second job as a busboy, begins clearing their table in the middle of their meal. Even at Leela's home they can't quite be alone, as they are self-conscious about Nibbler. When Leela complains about the impossibility of being alone, a targeted advertisement appears on her wristlojackimator. The ad promotes Casa Isolada Eco Resort, a resort that caters to only one couple at a time and is devoid of other people. The ad announces a discount for Leela because she would be a repeat customer. Fry becomes jealous at this news, and Leela admits that she had visited once with Sean.

The next day, the other crewmembers are loading the ship with tiny cars for a delivery to Simian 7, "the planet of the apes", where humans are strictly forbidden. Fry and Leela enter and announce that they are taking a week off. Farnsworth initially objects, but Fry reminds him that they are humans, so he allows them to leave. Being left shorthanded, Farnsworth instructs Amy to participate in the delivery disguised in her marmoset pajamas.

At Casa Isolada, Fry and Leela enjoy a very nice day together and are swimming naked when Leela's old boyfriend Sean inexplicably appears. To the horror of both Fry and Leela, Sean strips down and jumps into the pool with them.

While everyone puts their clothes back on, Sean explains that he is here on vacation, availing himself of the repeat-customer discount. He is here due only to bad fortune; his vacation had come to an end, but the homeward shuttle is "under repair". Fry's jealousy, already at a fever pitch due to Sean's physical presence here, is further aroused when Leela accepts Sean's invitation to go to the resort's bar and catch up. Leela and Sean catch up fairly quickly, but then Sean plays his saxophone for her until she is quite bored and Fry is quite drunk and angry. Fry interrupts them and picks a fight with Sean. Sean's wife, Darlene, interrupts the fight to announce that the shuttle is repaired. She and Sean depart immediately to avoid any extra resort fees.

On Simian 7, the delivery complete, Amy and Guenter the monkey recognize each other. Guenter promises not to give away Amy's secret. In fact, Guenter takes Bender, Amy, and Zoidberg on a tour of his city, leading them finally to the City Zoo, where he explains that the zoo's policy of compassion leads to the animals not even knowing that they're in captivity. The point is driven home when they arrive at the human exhibit, where they find Fry and Leela enjoying their "secluded" vacation, unwittingly on public display on Simian 7. The arrival of the tour group coincides with the moment at which Fry and Leela make up and begin their vacation in earnest.

Guenter and the others believe that their friends are being held against their will. They visit the zoo director, who turns out to be Banjo the orangutan, to plead for their release. Banjo explains that not only are they not being held, but they actually paid to be there, as the human exhibit and Casa Isolada are one and the same. It is a popular exhibit, as different couples have visited for years. Banjo explains that when Sean and his current wife visited, the zoo decided to conduct a behavioral experiment: "strand" Sean and Darlene, entice Fry and Leela to visit, and observe. Guenter is satisfied at the news that Fry and Leela are here voluntarily, but the Planet Express crew are not. They worry about Fry and Leela being embarrassed. Banjo helps them to cool their fervor by showing them video of Fry and Leela complaining about and mocking each one of them in turn. Banjo finally reveals his knowledge that Amy is a human, and sounds the alarm. Fleeing, the crew resolve to rescue Fry and Leela in spite of being offended. On the threshold of success, they are swallowed whole by a moon worm and must wait a week to pass through its digestive tract. They emerge somewhat worse for the wear to find Fry and Leela just leaving, unaware of their presence, having spent a week on display.

Back home, Fry and Leela tell the others about their vacation, oblivious to everything that happened outside their enclosure. Bender wants to humiliate them by revealing the truth, but Amy and Zoidberg remain strong, urging him to keep the secret. When Fry and Leela loudly and mockingly revisit their own secrets about the others, Amy changes her mind and advises Bender, "Let 'er rip."

On 5 February, 2013, Vulture.com released a preview clip for the tenth broadcast season,[3] which contained footage from the episode. 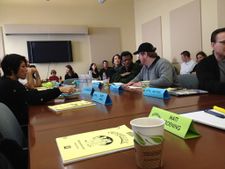 A picture of the table read for the episode tweeted by writer Eric Rogers.[5]

Leela: Sean, I'd like you to meet Fry, he and I are... What would you say we are, Fry?
Fry: Nude and interrupted.

[Amy approaches Zoidberg whilst dressed like a marmoset.]
Amy: I'm not sure this marmoset disguise is working...
Zoidberg: I'm not sure either. We better ask Amy!

Fry: You know who I hate most? That monkey we haven't seen in years — Guenter.

Fry: An-and... the robot hands would make you a strawberry shortcake any time of day. Four, seven, any time!
Hermes: No way!
Fry: I'm not lyin'!

Bender: You were in a zoo!