This article is about the episode. For the character, see Möbius Dick (character).

"Möbius Dick" is the one hundred and third episode of Futurama, the fifteenth of the sixth production season and the eighth of the eighth broadcast season. It aired on 4 August, 2011, on Comedy Central. Leela becomes obsessed with hunting down a mysterious four-dimensional space whale.

Act I: "I remember it like it was interesting."

Farnsworth is mourning the loss, exactly 50 years ago, of his first Planet Express crew. To commemorate the anniversary, Farnsworth sends the current crew to pick up a memorial and fly it back to Earth. When they arrive at the planet where the monument is being made, Leela notices a spelling error and orders the monument to be remade – meaning they will not arrive in time for the memorial, unless they fly through the Burmuda Tetraheadron, which is thought to have killed all ships that have traveled into it before. There, among other wrecks, they find the first Planet Express ship. While the crew inspect the wreck, a giant killer space whale emerges from the fourth dimension to chomp on it.

Act II: "Oh, and there was also a giant killer space whale."

Once back on their ship the Planet Express crew is once again attacked by the killer space whale which eats one of their engines. Leela states that her only mission is to deliver the monument to Earth. The whale eats the monument and Leela says they now must avenge the loss of that monument and kill the whale, which she refers to as Mobius Dick.

Leela orders that the solar sails be raised, and the ship is generally transformed into the style of a 19th century whaler, complete with a barrel of grog, swabbing the decks, and navigation with old-style charts and compasses. Bender watches for the whale from a crow's nest.

When the whale reappears, Leela asks who knows how to handle a harpoon and Amy replies. She harpoons the whale and it doesn't die but pulls the crew into the fourth dimension where they all see into time in a different way. They emerge into a field of "spacebergs"; upon learning they are diamonds, Bender goes to the crow's nest to try to gather some, but is hit by one, breaking his head off and knocking the rest of him away from the ship. Leela refuses to rescue him, provoking the others to mutiny. They cut the harpoon rope and save Bender. The whale returns and bites off the nose of the ship, containing Fry, Bender, Hermes and Amy. Leela, who is now clearly insane (and has fortunately put on a space helmet), attacks the whale with a cheese knife and is also swallowed. Zoidberg, once again, escapes to Earth in a pod.

Act III: "Enough of your mad obsession with Bender, Fry! We've got to murder that whale or die trying."

Except for Leela, the crew are swept into the whale's looping intestines. Leela meets Landow Tucker, captain of the first Planet Express crew; he explains that the whale feeds on the obsession of ship captains, and having mostly consumed him it needs to absorb a new food source, Leela.

Back on Earth, the crews' families – Leela's and Amy's parents, Landow's and Hermes's wives and sons – gather for the memorial ceremony. The whale appears in the sky and crashes into the Planet Express hangar, and Leela walks out of its mouth, explaining that her obsession enabled her to steer the whale through space and time. The whale then disgorges the monument and the crews, all of whom (except Landow) have been frozen in time by the whale's looping hyperspatial digestive system.

After the loved ones greet each other, everyone agrees to kill the whale. Candy, of the first crew, invites Zoidberg to resume an interrupted flirtation; in reply he combs his new hair in a duck-tail and imitates Fonzie.

A number of spaceships, vehicles, and objects are identifiable in the Bermuda Tetrahedron. 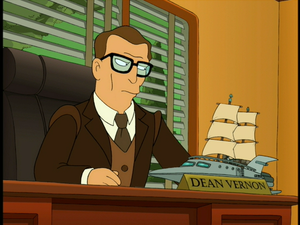 Leela: Okay, which of you space dogs has the guts and know how to harpoon that whale?
Amy: I spent a semester in Africa harpooning giraffes, and giraffes are basically just land space whales.
Leela: Miss Wong, you have the 'poon.

Fry: Leela, I'm no doctor, but you be exhibiting symptoms of illin'.