"Xmas Story" is the seventeenth episode of Futurama, the fourth of the second production season and the eighth of the second broadcast season. It is the first seasonal episode. It aired on 19 December, 1999, on Fox. It guest-stars Conan O'Brien as himself in a jar and John Goodman as Robot Santa. On Xmas Eve, Fry realizes he has been a jerk towards Leela and decides to make it up for her, when they both run into Robot Santa, who is nowhere as nice as the former children's character was made up to be.

Act I: "He doesn't know about Santa Claus!"

The Planet Express crew are all on a company Xmas ski trip at Catskills Lodge. Fry begins to feel sad, since it's his first Xmas in the 31st century. In an effort to cheer him up, they get an Xmas tree (a palm tree, since pine trees have been extinct for 800 years). Back at the office, everyone gets an Xmas card except for Leela, and we realise that Leela is just as lonely as Fry. However, Fry doesn't, and complains rudely. Fry's moping affects Leela, and she runs off in tears.

Fry feels guilty for upsetting Leela, and runs out to get an Xmas present. Everyone warns him to be back before dark, so the ruthless killer robot Santa Claus built in the 2800s doesn't get him. Bender goes to "volunteer" at a Liquor Kitchen, where he poses as a homeless robot to get free booze. Fry goes to the mall, and winds up shopping in the only store left open, Joe's Ark Pet Store, where he buys Leela a $500 parrot. On his way home, the parrot escapes, and Fry starts chasing it across town. Leela returns to Planet Express and learns Fry is out buying her a present; she runs out to find him. Fry, having chased the bird up a digital clock tower, falls off only to be saved by Leela. Before they can get home, they run into Santa!

Bender and his new homeless robot friends go caroling, as an excuse to get into people's homes and rob them. Meanwhile, Fry and Leela are chased across town by Santa until they run into Bender. When Santa confronts Bender, he tries to blame the crippled orphan robot Tinny Tim. This is so incredibly naughty, Santa immediately adds it to his list, allowing Fry, Leela, and Bender a head start. They make it back to Planet Express, but Santa is right on their heels and gets inside. Santa gives Zoidberg a pogo stick, but attempts to kill everyone else for being naughty. Zoidberg, hopping on his new pogo stick, cuts a string of lights with his claws. The loose wire falls and electrocutes Santa, knocking him back into the fireplace. They slide the blast door closed before Rudolph explodes, blasting Santa out of the building. Everyone sits down to an Xmas dinner prepared by Bender - consisting of the parrot Fry had bought for Leela. They then sing "Santa Claus Is Gunning You down", while Robot Santa threatens that he'll be back next year. 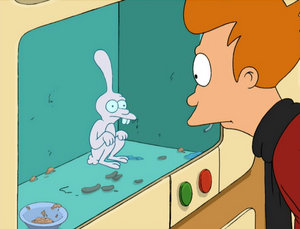 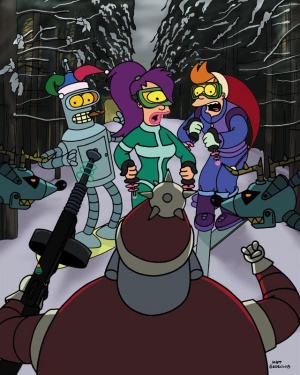 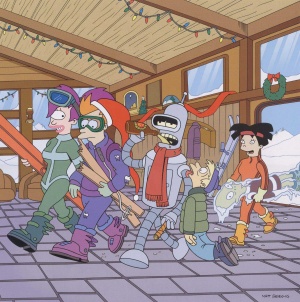 Click here to see revelations about the future made in this episode.

Fry: All right, bird, you thought you could beat me in a game of wits, but you just met your equal.

Fry: Leela! Oh my God! You saved my life! I'm going to get you so many lizards!

Farnsworth: Good thing I got us out of that one.

Robot Santa: I'll be back, back when you least expect it...NEXT XMAS!