"The Honking" is the thirty-first episode of Futurama, the eighteenth of the second production season and the first of the third broadcast season. It aired on 5 November, 2000, on Fox. Bender becomes cursed to become a were-car and the crew must find the original were-car to cure him.

When Bender's Uncle Vladimir dies, the Planet Express crew go to the funeral at his castle in Thermostadt. Vladimir has left Bender the castle in his will, stipulating that he spend the night before receiving the castle. The castle is haunted by robot ghosts. After Bender runs scared from the castle, the Professor finds a logical explanation for the ghosts. Before Bender can be told this, he is run over by a car.

Bender has nightmares about the car. A car is seen chasing down some squatters. The next day, Bender awakens in Impound Lot 136 with no memory of the previous night and covered in transmission fluid. Bender seeks advice on the situation from the Gypsy and learns that he is now a were-car, doomed to become a car each night and eventually kill his best friend. He must kill the original were-car to remove the curse. Hoping to confine him, Leela and Fry weld Bender to the wall of his apartment then leave, Bender transforms and chases Leela. This upsets Fry, who takes it as a sign that Bender does not consider him his best friend (as the Gypsy warned them that Bender would ultimately kill his best friend under the curse).

Act III: "Many robots are stupid and violent."

Bender returns to normal and Fry tells him that he hurt his feelings. They attempt to track down the original were-car, with Fry still upset he's not Bender's best friend, and reach Calculon, who reveals his past as a construction robot in 2019 and tells them where to find the car, Project Satan. At the automotive lab, Bender transforms and tries to kill Fry, which cheers Fry up. Project Satan falls into an incinerator and melts to death, curing Bender. 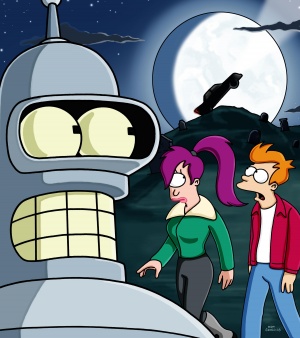 Fry: Bender's supposed to murder his closest friend, which I thought was me. But he went straight for you! He didn't even try to second-degree murder me!
Leela: Could you give me some help? I think Bender crushed my foot.
Fry: Stop rubbing it in!

Gypsy: You have nothing to worry about. Except a nightmarish life of unremitting horror.
Bender: Pfew!

Execu-Tor: And to my loving nephew Bender, assuming he's not responsible for my death, I leave my castle.
Bender: Yes! Let's stay there tonight!
Execu-Tor: On condition that he spend one night within its walls.
Bender: Aw, man, there's always a catch!

Farnsworth: Just as I suspected. These robots were buried in improperly-shielded coffins. Their programming leaked into the castles wiring through this old, abandoned modem allowing them to project themselves as holograms.
Hermes: Of course! It was so obvious!
Farnsworth: Yes, that sequence of words I said made perfect sense.

Sal: We're all scared, it's the human condition. Why do you think I put on this tough guy facade?