The Why of Fry

"The Why of Fry" is the sixty-fourth episode of Futurama, the tenth of the fourth production season and the eighth of the fifth broadcast season. It aired on 6 April, 2003, on Fox. It guest-stars Bob Odenkirk as Chaz. Nibbler enlists Fry in a mission to blow up evil brains bent on destroying the universe; Fry time travels into the past to prevent himself from being cryogenically frozen. 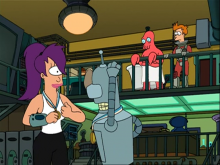 Fry feels unimportant when Bender and Leela comes back from a successful mission without him.

Act I: "Without me, there IS no mission!"

Fry is disappointed because Leela and Bender went on a mission without him (and without his services as Delivery Boy), and because Leela is going out with another man - Chaz, the Mayor's aide. Fry is upset because he thinks himself unimportant. Meanwhile, Leela and Chaz are going to Elzar's Fine Cuisine, where Chaz manages to get a table without a reservation - Leela is genuinely impressed. Fry has adjourned to O'Zorgnax Pub to drown his depression in alcohol, however, Leela and Chaz enter and Leela tells him she may not make it back to her apartment tonight, and she needs him to walk Nibbler. Fry gets fined as Nibbler unloads a pile of Dark Matter on the sidewalk, just in time for Chaz to make a showy appearance in his car with Leela. Nibbler, however, reveals his intelligence to Fry and takes him to his spaceship, both leave Earth and head for Planet Eternium where the Nibblonian Council informs Fry that he is the most important person in the universe, for the fate of the universe rests with him. 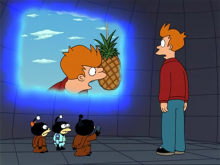 The Nibblonians tell Fry of his powers, or lack thereof.

Fry is told that due to his lack of the delta brainwave, he is immune to the attacks of the Brain Spawn and therefore the only hope of the universe. The Brains have constructed the Infosphere, a monstrous memory bank that contains all information in the universe. Once they have acquired all information, they will make sure that there is no new information by destroying the universe. Fry is to infiltrate the Infosphere and plant a Quantum Interphase Bomb inside that will blast the sphere into an alternate universe from which there is no return, then escape the blast on a Scooty-Puff, Jr. (Who's ready for safe fun?), a clockwork-powered scooter. As the Infosphere opens itself for a final self-scan, Fry can enter the structure undetected as the Brains cannot perceive him because of his special thought processes. Fry plants the bomb, but hesitates to trigger it as he wants some answers on intriguing questions, like what postal stamp glue is made of (toad mucus) and what really killed the dinosaurs (the giant brain at the center of the sphere). The unauthorized access triggers the alarm, and as Fry tries to make his getaway, the scooter breaks. The brains become aware of his presence, among them the Big Brain. Fry now triggers the bomb, leaving sixty seconds to detonation. Fry is pleased that he is helping good triumph over evil, or so he thinks. The brains in turn show him what really happened on the night of 31 December 1999 when Fry got frozen (after some confusion between him and a Philip J. Fry from Hovering Squid World 97A) - Nibbler gave Fry's chair a push so he fell into the cryogenic tube. Fry is furious with the Nibblonians for wrecking his past life, but before they can elaborate on the subject, the bomb goes off and transfers the Infosphere to the alternate universe. 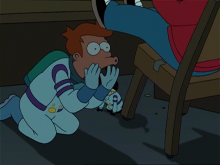 To save the universe - and other things - Fry pushes himself into the tube.

The Brains think of a way for Fry to return to 31 December 1999, so he can prevent Nibbler from shoving him into the tube and thus stop the Nibblonians from thwarting the Brain's plan to understand and destroy the universe. Meanwhile, Chaz has taken Leela to the Rocket Skating Rink that he has reserved just for them - impressing her once more. But the reservation means that the orphans from the Cookieville Minimum Security Orphanarium can't take their turn on the rocket skating rink as planned and are missing out. Leela asks Chaz if the orphans can join them, but he refuses as he wants to impress her with his amazing influence. This leaves Leela extremely testy, and she makes him eat his own badge - the romance is over. Fry is transferred by the Brain Spawn to Old New York, to the night he was frozen, where Nibbler is then busy ordering a pizza as I. C. Wiener at Panucci's Pizza to the address of Applied Cryogenics. Fry materializes behind Nibbler under the desk his other self is sitting at and seizes him, telling him what brought him there. Nibbler explains that he did not come back in time, and that Fry is needed in a thousand years time, and that the Nibblonians were afraid he might refuse being frozen. Fry, on the other hand, loves the future and has nothing against being frozen, but is still mad because he does not like being used. Nibbler now tells Fry what happens now is his choice, and asks Fry if there is nothing in the future that he wants, and Fry answers that it is Leela - but that she doesn't think much of him. Nibbler thinks she may be the Other, and tells Fry not to give up on her - he offers his help in the matter. Fry is now left to choose between saving himself or the universe - and Leela. He makes his decision and tips the chair his other self is sitting on, sending him into the cryogenic tube - the future is saved... unfortunately, it means he's going back to the other Universe and the Infosphere. Fry has just enough time to say that Scooty-Puff, Jr. sucks before he fades - and so, a thousand years later, Fry manages to escape the vanishing Infosphere on the Scooty-Puff, Sr. (The Doom-Bringer). Nibbler brings Fry back to Earth and then deletes his memory of the incident to maintain his cover. Before that, he gives Fry a flower that he in turn gives to Leela, and for a moment, she is happy to see him, although he is not the most important person in the universe. As she gives him a kiss, Fry's final utterance is "YES!" 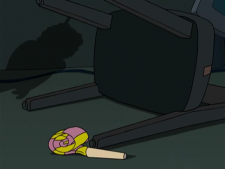 The events of the episode were planned before the show even started, as is evidenced by the foreshadowing of Nibbler's shadow in the pilot.

Ken: Does he not know?
Nibbler: He does not know.
Fiona: He knows not?
Nibbler: Knows not does he.
Male Nibblonian 2: Not he knows?
Ken: Enough!

Fry: I did do the nasty in the pasty.
Nibbler: Verily.

Nibbler: Quite possible. We live long and are celebrated poopers. You will meet me when I'm a thousand years older.

Nibbler: Yes, incidentally, I need to remain undercover so I'm blanking your memory.
Fry: [After his memory is erased by Nibbler.] Hmm, did everything just taste purple for a second? All right, c'mon, you dumb poop machine.

Fry: Is it true that postage stamp glue is made of—
Infosphere: Correct, toad mucus!

Fry: What really killed the dinosaurs?
Infosphere: MEEEEEE! [The Giant Brain is seen blasting dinosaurs to death with its ray blasts.]

Leela: We're back from the mission!
Fry: Wh-What? You went without me?
Bender: [Shouting.] You were looking up curse words in the dictionary. It seemed like a better use of your time.
Fry: But-- But I'm the delivery boy.
Leela: Don't worry. Everything went fine.
Bender: Better than usual!
Leela: We got medals! 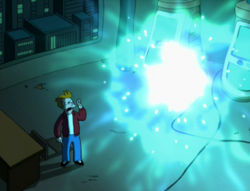 In "Anthology of Interest I", a hole emerges and destroys the universe if Fry does not go into the future. In this episode, we finally learn why.