The episode begins with Hermes introducing everyone by their full name and title. But as he introduces Farnsworth, Farnsworth fires everyone because the delivery network cancelled their license two years ago. However, the phone rings, and he is soon told that the people who cancelled their license were themselves fired for incompetence and brutally beaten; some died from their injuries and were ground into a fine pink powder. The crew throw a party to celebrate their return, but as Hermes shows off his moves in limbo, his head is cut off by a falling sabre, his body crushed under the Planet Express Ship. The crew can do nothing but watch in silent horror.

At the Head Museum, Hermes is put in a temporary head jar by Lars, the jar feeder at the Head Museum, while Lars flirts with Leela, making Fry jealous. When LaBarbara and Dwight enter to find Hermes in a jar and learn that his body won't be fixed for at least a week, LaBarbara immediately goes out to find a new husband.

While making a delivery to the Nude Beach Planet, on which the entire crew must remove every aspect of clothing from their bodies, Leela notices that Fry has a tattoo of Bender on his butt cheek, which even Fry is surprised to find. Later, Bender is approached by the nude alien Nudar, along with two other associates, to sign a petition and to give them his email address, managing to get most of Planet Express crew to sign up.

When Farnsworth finds out about the scams, he decides to teach the crew how to spot scams on the Internet, but he too becomes a victim as well. Despite warnings from the rest of the crew, who now know better, he signs a form on the site. Mere seconds later, the trio of nude aliens from the Nude Beach Planet (still completely nude, as they are nudists) arrive and inform him that they now own the company, presenting a contract signed by the Professor. Bender, under the influence of the virus, addresses them as his masters.

Planet Express is turned into the base of operations for the nudists' scams. Later, Lars returns to bring Hermes his permanent jar, saying that the museum has also been scammed and that the repairs on his body are delayed. He then asks Leela out, which again upsets Fry. Fry has always loved Leela and is confident they would end up together some day, but the only thing that puts Leela off about Fry is his immaturity, which consistently dashes his hopes of ever being with her.

While searching for information around the building, the scammers sense a large amount around Fry, which is revealed to be coming from the tattoo of Bender on his ass. As the crew examines the tattoo, they discover a binary code on the pupil of the tattoo's eye. As Bender reads the code aloud, the Galactic Entity hears it and sends back a time sphere, the key to time travel.

As the scammers debate what they can do with the time sphere, Nibbler reveals himself and intervenes, shocking everyone with his ability to speak. Nibbler warns them about the consequences of using it, saying that it could tear the universe assunder; though they acknowledge this risk, they still intend to use it. The Nibblonians launch an attack on the scammers with their kitten-class ships. However, they are defeated as the scammers knock them away with folding chairs. Nibbler laments as the universe is now doomed. 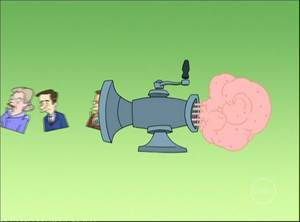 The most notable change is the sponsorship by Torgo's