"Where the Buggalo Roam" is the forty-second episode of Futurama, the tenth of the third production season and the sixth of the fourth broadcast season. It aired on 3 March, 2002, on Fox. On Mars, Leo and Inez Wong's buggalo herd is stolen by Native Martians, prompting Kif to lead a group to retrieve them.

Act I: "I broke your television!"

The PE crew goes to Mars (Mightiest of Planets) to visit Amy's parents at the Wong Ranch for Mars Day. The Wongs invite the crew in, and Zoidberg makes himself at home. The crew goes on a tour of the ranch, and Leo Wong reveals that the Wongs own the entire western hemisphere. Amy is reunited with Betsy, her pet Buggalo. Betsy is to be eaten at Amy's wedding. The Nimbus orbits Mars, and Zapp helps Kif prepare for meeting the Wongs. At the Mars Day celebration, Bender chats with the DJ, and Leo barbecues various animal parts. Inez Wong explains that Mars Day commemorates the day that Sir Reginald Wong bought Mars from the Martians for the price of one bead. Amy introduces Kif to R.J., who appears to be her ex-boyfriend. R.J. forces Kif to have a cigarette, and Kif starts coughing before it's even lit. Kif laments his difficulty impressing Amy's parents.

After Amy tries to console Kif, saying her parents didn't see him puke, a dust storm rages, accompanied by a strange sound, so everyone heads inside. After the storm finishes, and Leo ensures nobody wants a lawsuit, they notice that the Buggalo all disappeared in the storm. Zoidberg has decided the Wongs are his parents, much to their disgust. Kif takes the responsibility of saving the Buggalo, though Leo and Inez are not comforted.

Act III: "My turn to tell a ghost story!"

Kif plans to take the remaining Buggalo (Betsy) on a cattle drive to find the rustlers. The Professor, noting the likelihood of death, sends Fry, Leela and Bender along. That night they camp on Olympus Mons. The group attempts to scare each other with ghost stories, Fry seems to know them all and tells the scariest. Amy appears so that she can be with Kif. Kif and Amy find the Buggalo in the crater of the volcano and Kif uses explosives to get them out. Another sandstorm begins, sucking everyone up into the vortex. The Native Martians reveal themselves on their flying Buggalo, and tell of their plan to ruin the Wong family by stealing the Buggalo. On learning that Amy is a Wong, they decide to kidnap her instead.

Everyone else returns with the Buggalo. The Wongs call in Zapp Brannigan to rescue Amy. The Professor sends his crew along again. They make their way to the great stone face of Mars, the only entrance to the Martian Reservation on that side of the planet (meaning they cannot enter through the great stone ass of Mars), and are followed by Betsy. Brannigan performs his usual poor attempts at negotiation and the Martians call another sandstorm to destroy the planet that they can't get back, then pull Amy into the storm. Kif flys Betsy to save her, which calms the Martians, who request Kif smoke the peace pipe with them.

Kif actually manages to smoke without gagging, but then is patted on the back and coughs up smoke. The Martians prepare to kill Kif with the bead they traded the planet for and are surprised to learn that it is a gigantic diamond, worth a fortune. They abandon the planet, because it's a dump, and head off to find a new planet. The Wongs are told what happened, but think it couldn't have been Kif and praise Zapp instead. Leo and Inez finally kick Zoidberg, the son they neither had nor wanted, out of the building. Kif learns that it is a good thing Amy's parents don't like him, Amy saying that "If they liked you, then I woudn't. Do you know anything about girls?". 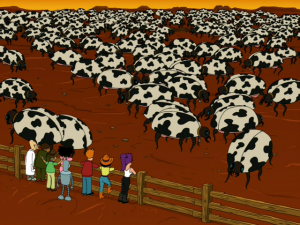 Martian Chief: With cash like this, who's going to argue? Nobody, that's who.

Leo: Oh no! Martians kidnap Amy! I know it them, cause they no use good gramma.

Zapp: I didn't realize you were bringing your girlfriend Lieutenant. *snickers*
Kif: *sigh* She won't leave me alone.
Zapp: Did I say "girlfriend"? She sounds more like a wife!
[A tumble weed rolls past.]

Kif: The rustlers must have seen me coming and run off, scared.
Amy: Oh, Kif! You're so brave!
Kif: [nervous] Sh! They'll hear us!

Leela: Wow, look at that: Olympus Mons, the tallest volcano in the solar system.
Fry: Where?
Leela: Right in front of you.
Fry: Oh. Oh!