This article is about the in-universe comic. For the actual comic, see Delivery-Boy Man (comic).

Delivery-Boy Man is a comic book written and inked by Philip J. Fry. After conquering Erth, Invader X abducts Leelis Lane, and it's up to Delivery-Boy Man to rescue her. It was featured in the Season 6 episode "Lrrreconcilabe Ndndifferences". 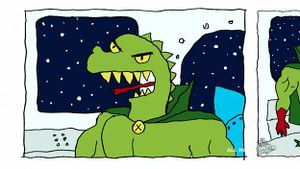 A spaceship shoots Erth five times, causing it to explode. After seeing it destroyed, an alien reptile says he is conquering the planet, which actually doesn't make much sense. Leelis Lane interrupts him, calling him Invader X, and announces Delivery-Boy Man. The superhero fires lasers from his eyes with the laser eye power, blasting the spaceship that destroyed Erth. He then uses the hand magnet power to get the supervillain's gun and unbuckle Leelis Lane. Invader X asks him to stop, but Delivery-Boy Man decides to save her love once and for all by reversing time. His actions manage to bring back the lasers the spaceship fired at Earth. Consequent and strangely, these lasers blow it up. Later, while having a meal with Leelis Lane, Delivery-Boy Man says that everything is alright... and they kiss. The next panel shows the credits: the comic book was "written and inked by Fry!!!"

This first version has 9 panels. 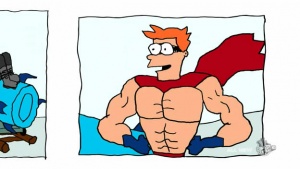 Leelis Lane has apparently been constructively criticising Invader X, and he seems to be getting fed up with it. As a result, he is going to shoot her... if Delivery-Boy Man takes one more step, that is. Unfortunately, as in this version he has no ridiculous powers, there's nothing useful he can do. With nothing on his way, Invader X shoots and disintegrates Leelis Lane. After she dies, Delivery-Boy Man starts crying.

This second version has 5 panels. 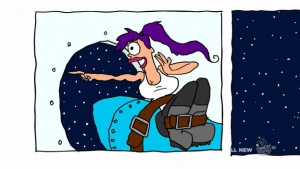 Invader X is going to shoot Leelis Lane in her forehead. However, Delivery-Boy Man jumps in front of the X death ray. Sadly, he does it too soon. The alien reptile hasn't shot yet. The superhero is defenseless. Luckily, he has recurred to his metiowishing power to telepatically make a meteorite break in the room and fall over Invader X. Nearing his death, the supervillain screams. Leelis Lane says her hero had saved her by random chance, but he reveals to her what really happened, and they kiss.

This third version has 6 panels.

Fry's writing is influenced by events in his real life. Examples of this include Leela's constructive criticism to the first version of the comic book becoming part of the dialogue in the second version and Fry saving Leela from being shot by Lrrr inspiring the actions of Delivery-Boy Man in the third version.

Invader X: Stop it, you hero!

Delivery-Boy Man: Oh, yeah? I may be just a simple delivery boy with no superpowers, so there's nothing I can do.