Inside the facility, the crew gets to the heart of the mine, which turns out to be a huge Nibblonian farm, whom are force feed with chickens constantly to produce dark matter. Nibbler recalls what happened on Vergon 6, with the DOOP mine crew hiring Mom to mine the planet hollow, unfortunately, Mom captures all of the Nibblonians having learnt the secret of where dark matter comes from. After being escorted by Igner, the crew manages to get into Mom's control room, where Farnsworth is very close at getting the crystals to touch, but fails.

Meanwhile, Bender's therapy is not working, and Dr. Perceptron decides to put him down. As the crystals have made all dark matter glow, Bender's imagination along with the power of crystals sends him to Cornwood. At the facility, Farnsworth swallows the crystal to avoid Mom from getting it, but while she is ordering her sons to obtain the crystal from his stomach, Bender's waves reaches them sending them to Cornwood as well.

In the alternative reality, Fry emerges as himself, Leela, however, has turned into a centaur. Bender, as Titanius Anglesmith, rides to greet them to Cornwood.

They ride out to defend themselves. But it is then they discover that Frydo has been carrying the Die of Power all this time, he rolls it on accident, it rolls 7, which in Appendix G, is "Banish Foes", which is done. Knowing the Die's power, they ride to Greyfarn who tells them the story of Momon who forges the Dies of Power in the plastic. But the Die's power is too great, and must be destroyed in the very same heat from which it was forged.

And thus they ride out, on their way they meet a group of centaurs, led by Hermaphrodite (Hermes), who, as their name suggests, is intersex. To Leegola's disappointment, despite being master archers, the centaurs are pacifists. Hermaphrodite refuses to let the group pass, but they go through anyway.

After a long trip, they finally make their way into Cave of Hopelessness, in the hope of getting around Momon's forces, where they pick up Gynecaladriel (Amy), 'Queen of the Water Nymphos'. Inside they fight their way past a marauding band of 'Morcs' and have an encounter with the being of Zoidberg, which they confuse for the Tunneling Horror, the reason the Cave of Hopelessness gets its name. Leegola butchers Zoidberg in cold blood, only to discover he isn't the Tunneling Horror... the real Tunneling Horror is then revealed. 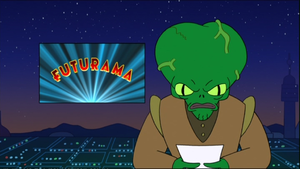