"Obsoletely Fabulous" is the sixty-eighth episode of Futurama, the fourteenth of the fourth production season and the fourteenth of the fifth broadcast season. It aired on 27 July, 2003, on Fox. Bender finds himself feeling obsolete compared to the new Robot 1-X, but he cannot get himself to get the upgrade, so he flees to a distant island.

The "Roboticon 3003", the worlds largest robot trade show, takes place in Madison Cube Garden, and the crew goes to have a look. Professor Farnsworth and Dr. Wernstrom use this opportunity to present their latest Killbots - unfortunately their stalls are side by side, so they end up in a fist fight, while their killbots go share a drink in the face of the senseless violence from their creators. Mom's Friendly Robot Company presents its latest model: Robot 1-X, a servant robot with countless uses around the house. The Professor is so impressed that he buys one of them, which makes Bender unhappy who feels threatened by this superior piece of technology. To take care of that, he decides to get an upgrade to become compatible with the new technology. Seeing how the other robots getting the upgrade are changed by it, Bender changes his mind and flees from the factory, but is afraid to face his co-workers in his current obsolete state. He folds a no boating sign into a makeshift boat and heads out to sea.

Act II: "I am a hideous triumph of form and function"

Bender strands on a lonely island and soon runs out of power. He is rescued by a group of obsolete robots who refused to get upgrades and defy modern technology, instead they embrace nature. Bender soon adopts their ways and goes even further - he decides to get a downgrade. He emerges from it as a steam-powered unit with a wooden body. He decides it is time to declare war on technology.

Bender and his fellow robots travel in a wooden rowing sumbarine to New New York, performing acts of anti-technological terrorism. Their last target is the Planet Express building where Bender has a score to settle with Robot 1-X. They shoot the building with a catapult but miss, trapping the crew under the damaged Planet Express Ship where they are threatened by burning fuel. Bender rushes to save his friends, but is let down by his wooden body that disintegrates from termites. The only way to save the crew is to ask Robot 1-X for help, which Bender does, and it saves the crew. Bender realizes that he loves Robot 1-X - and finds that he never left the factory in the first place, and his experience on the island was an illusion triggered by the upgrade process. Amazed at how real the vision was, Bender begins wondering if life itself is just the product of his or someone else's imagination, but comes to the conclusion that "Reality is what you make of it," and walks off into a fantasy world with unicorns and cigar-lighting fairies. 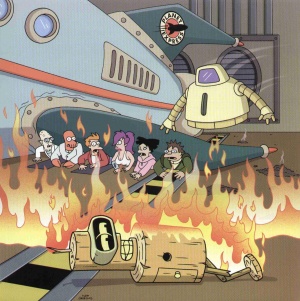 Bender: That new robot is great, huh? It sure made me look like a pile of crap.
Professor: Indeed! That's why I bought one to help around the office!
Bender: Eeee!

Bender: We're going to stage an attack on technology worthy of being chronicled in an anthem by Rush!

Bender: [After being made a wooden body.] Behold my hand-crafted purity! The modern world can bite my splintery wooden ass!

Leela: [After seeing Bender in his new body.] Oh Lord, he's made of wood.

Bender: Save my friends! [Bender screams.] And Zoidberg!