"Time Keeps on Slippin'" is the forty-sixth episode of Futurama, the fourteenth of the third production season and the fourteenth of the third broadcast season. It aired on 6 May, 2001, on Fox. After collecting chronitons in an attempt to beat the Globetrotters in a basketball game, Farnsworth inadvertently causes time to start skipping forward randomly. Meanwhile, Fry tries to win Leela's affection, and during a time skip he manages to do so, while Bender tries to become a member of the Globetrotters.

Act I: "Your face can take a lot of punishment. That's good to know."

While the staff of Planet Express are visiting Central Park Lake, a spaceship lands and the Globetrotters emerge and challenge Earth to a game of basketball simply to embarrass them if they lose. Professor Farnsworth offers to play them and plans to beat them with a team of mutant atomic supermen, however they are currently only babies. To speed up the growth, Farnsworth sends the crew to collect chronitons. While collecting the chronitons, Fry tries but fails to impress Leela. Professor gives the supermen the chronitons and they grow into adults; mutations include a man with a cannon in his chest and a giant spider. The basketball game starts and is commentated by Marv Albert's head. The supermen are winning 48-42.

While playing, however, a strange flash occurs, causing everyone to reappear in a different position. Another flash happens, and Professor times the game out; he determines that time is lurching forward randomly, due to interference from the Chronotons. Time and space are ripping apart. In addition, Aracneon is killed and Fry offers to play to show Leela his skills. However, in two minutes he allows the Globetrotters to win 200 points, causing Earth to lose the game. The leader of the Globetrotters, Ethan 'Bubblegum' Tate offers to help find out what is happening with time and space. The Professor concludes that by Thursday it will be the end of existence.

Time continues to skip forward and the Professor concludes that everyone acts normally during a time skip, but they have no memory of it. Bender expresses his love of the Globetrotters and his desire to be one. Fry shows Leela to a special room that will stop time skips; in reality, it is just a ploy for them to have sex, annoying Leela. She complains to Zoidberg that Fry is sweet but very immature. Through the Smell-O-Scope, Farnsworth finds out that time is leaking, causing time skips on Earth. Bubblegum thinks that moving a cluster of stars to a certain area will cause the time skips to move to an empty part of the universe. Using all of Earth's money, a gravity-pump is built to move the stars. After Leela successfully moves the stars, Bender shows Bubblegum his homemade Globetrotter uniform and Fry again tries to impress Leela. While Leela once again starts to reject Fry, saying she will never fall for him, a time skip occurs and Fry and Leela have just gotten married.

The time skips carry on and Leela, thinking that Fry tricked her into marriage, divorces him. The others try to console him. He tries to figure out how he managed to woo Leela. Farnsworth realises that Bubblegum's algebra was incorrect. The rest of the Globetrotters decide to cause an implosion in the Chronoton nebula to create a black hole. Farnsworth provides one of his doomsday devices for that to work. Bubblegum tells Bender he isn't 'funky' enough to be a Globetrotter, upsetting him. Fry apologizes to Leela about the possibility that he did trick her in marrying him, and begins to think that he will never find out how he and Leela married. However, he is taken aback when he finds out he really did win her heart by spelling "I Love You Leela" with the stars themselves; unfortunately, they are sucked into the black hole before he can show Leela. Fry asks Leela if she saw the message before it was destroyed. Leela has no idea what Fry is talking about and leaves the room. Fry gloomily stares out into space while Bender whistles a slow version of "Sweet Georgia Brown." 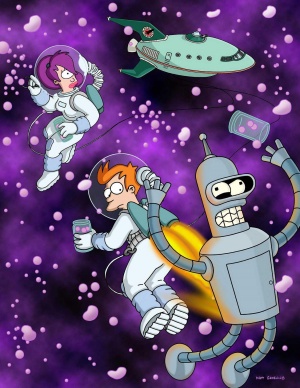 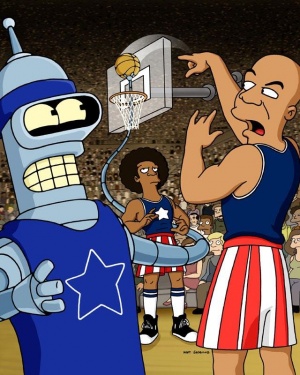 Fry: So, Leela, how about a romantic ride in one of those swan boats? They're kinda dangerous, but I finally mastered them.
Leela: Those aren't swan boats, they're swans.
Fry: Oh. That explains these boat eggs. [He holds up some eggs.]

Hermes: I'm no physicist, but I think I know how to stop the skipping. We'll just-
[Time skips, and Hermes finds himself playing a steel drumset, while the rest of the crew are doing a conga line butt naked.]
Hermes: I don't know how this was supposed to work.

Leela: Fry, stop. I don't wanna hurt you, but there is absolutely, positively no way that you and I will ever, ever-
[Time skips.]
Preacherbot: ...man and wife. You may kiss the bride.

Nixon: Now, how long will it take to build?
Tate: It won't be easy, Nixon. A jim-jam this complex might take months or even-
[Time skips.]
Farnsworth: Ah, there we are. One gravity pump. Powerful enough to move the stars themselves. Now to begin the arduous task of attaching it to the ship so th-
[Time skips. The Planet Express ship is taking off with the gravity pump attached.]
Farnsworth: Off you go, apparently.

Farnsworth: Doomsday device? Ah, now the ball's in Farnsworth's court!
[Platform rises from floor containing many doomsday devices.]
Farnsworth: I suppose I could part with one and still be feared.

Leela: Well, let's divide up the china. I guess I'll take the NFC helmets and you can have the AFC helmets.
Fry: Fine. Break my heart again.