A Flight to Remember

"A Flight to Remember" is the tenth episode of Futurama, the tenth of the first production season and the first of the second broadcast season. It aired on 26 September, 1999, on Fox. This episode tells several tales on board the cruise liner Titanic, piloted by Zapp Brannigan. It also introduces the relationship between Kif Kroker and Amy Wong.

Act I: "It's just my way of thanking you for not reporting my countless violations of safety and minimum wage laws."

The crew return to Planet Express, having narrowly escaped a delivery on the planet Cannibalon with their lives. They abruptly tell the Professor they're quitting, but they quickly reconsider after he tells them they are all taking a company vacation - on the maiden voyage of the largest space cruise ship ever built, the Titanic. None of them see any danger in this.

At the ship's christening and launch ceremony, Mayor Poopenmeyer presents Zapp Brannigan, who is honorary captain for the Titanic's maiden voyage. Hoping to avoid Zapp's advances, Leela pretends to be engaged to Fry. In the Titanic they all visit the professor's suite, which is in first class but the others' room is in the lowest class. Bender, in the casino, meets a rich fembot, the Countess de la Roca, who thinks Bender is rich too. Zapp Brannigan takes the ship off course seeking adventure, but the new course passes through a swarm of comets. Amy runs into her parents, who immediately begin trying to hook her up with an unpleasant fat man. To put them off, she also claims to be dating Fry, and kisses him.

Leela gets jealous of Fry's pretend relationship with Amy after seeing them kiss. Bender, pretends to be a rich aristocrat to impress the Countess, and in her room, he looks for something to steal and sees a gold bracelet with a diamond, but he can't take it. In the bar, he asks iZac why he couldn't steal the bracalet, and he says Bender's in love with her. Then Bender steals some drinks and gets beat up by guards called by iZac. The Countess saves him and accepts Bender anyway; romance ensues, and they have a passionate kiss. Meanwhile, as the others have a limbo competition, Hermes remembers when he was in the 2980 Olympics limbo team and a young fan of his broke his back while imitating him, this is what made Hermes quit limbo. Zapp makes Leela the winner, though she didn't even participate and as a reward he invites Fry, Leela, and the Wongs to dinner. At the restaurant, the Wongs want Fry to kiss his "girlfriend" Amy, but Zapp, suspecting Leela and Fry are not engaged, is watching him. When Kif calls Zapp away after his course corrections lead the ship into disaster, he has to leave the table, and Amy kisses Fry. Again, this makes Leela jealous and insecure. When she confronts Fry, he actually says the right thing for once. They see all the couples: Hermes with LaBarbara, Zoidberg with the Jellyfish Nurse and Farnsworth with Hattie McDoogal. They're about to kiss but the moment is ruined when Zapp's course corrections make matters worse. The Titanic is going to a black hole.

As the ship falls into the black hole (thanks to Zapp, who makes Kif the captain and escapes in a small ship), everyone heads for the life boats. Bender goes to find the Countess, who is trapped in a burning room deep in the ship. Bender uses a fire hose to put out the fire, and the room floods so Bender rides the Countess, who is a Class 3 Yacht, to safety. Meanwhile, the Planet Express crew is caught behind an emergency bulkhead, and it's up to Hermes to save the day by limboing under the door while Zoidberg holds it open slightly with his claw. Hermes goes really far down and manages to get to the other side to open the door. The Wongs find another boyfriend for Amy, Kif, and they kiss as they go to the boat. They wait as long as they can for Bender before boarding the last life raft and escaping, but Bender and the Countess arrive just in time and grab the raft's door before it launches. The pod is too heavy, and they are saved when the Countess falls into the black hole. Fry tries to console a sad Bender by saying the Countess might be in a parallel universe, but according to the professor she must be dead. Bender says he still has the bracelet but Hermes examines it and says it's fake. Bender cries as the pod flies away. 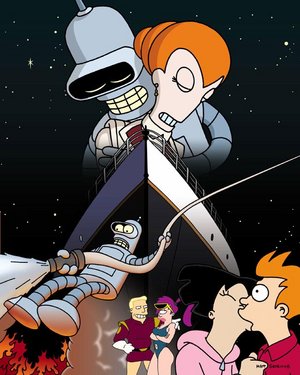 The Countess de la Roca: It may hurt for a while, but one day you'll share your love again. After all, it's shareware.

Leela: Take it off, or I'll break it off.

Bender: Well, I'm tired of this room and everyone in it. Now if you'll excuse me, I'm gonna pop over to the casino for the next 135 hours.

Fry: You're going back for the Countess, aren't you!?
Bender: Alright, I am, but I don't want the others to know! If I don't come back, just tell them I died robbing some old man!
Fry: I'll tell them you went out prying the wedding ring off his cold, dead finger!
Bender: [tearful] I love you, buddy!

The episode is often voted in the top three of season one.[1][2]