"The Duh-Vinci Code" is the ninety-third episode of Futurama, the fifth of the sixth production season and the fifth of the seventh broadcast season. It aired on 15 July, 2010, on Comedy Central. After Fry and the Professor discover a sketch by Leonardo da Vinci, the crew races to Rome to discover his big secret.

Act I: "All my life I've been inspired by great minds"

Fry is trying his luck in Who Dares To Be A Millionaire?, a game show hosted by Morbo. He fails the first question and gets "thrown out". Later, the crew is gathered by the conference table discussing Fry's (lack of) intelligence. Hermes and the Professor accuse Fry of being dumb, while Amy, Leela and Bender stand up for him. The Professor, thinking he was too harsh on Fry, takes him to the lab to explain why he finds him "so repugnant". Farnsworth tells Fry about the great minds that have inspired him all his life, such as Leonardo da Vinci, his personal role model. He shows "the dumb monkey" his most precious possessions, such as Achilles' heel, some of Leonardo's creations, and his beard. Fry accidentally discovers a hidden drawing in the beard, a drawing of Da Vinci's fabled lost invention. He offers his help to the Professor to figure out what it was for, but all he gets in return is a teasing laugh.

In front of the Planet Express building, Fry is distracted by his thoughts and gets hit by a hover bus. He returns from the hospital two weeks later and the Professor is still trying to deduce the function of the mysterious device. Bender walks in with the original version of The Last Supper (because everyone at Kinko's was an idiot), which reveals a clue after a High-Powered X-Ray is fired at it. It seems that St. James was actually a robot. The crew then races to Future-Rome to unearth what became of St. James.

In Rome, the crew finds St. James' grave in the catacombs. The robot inside explains he is not St. James but Animatronio, a robot built by Leonardo da Vinci to be his artist model, who was left to guard da Vinci's big secret and await his Shadow Society of Intellectuals. When he realizes the crew is not part of the Society, he refuses to tell them any more, and 'dies' before Leela can force him.

Even though Animatronio is dead, the Professor manages to deduce where the next clue is, and the crew travels to the Trevi Fountain. However, it is guarded by a giant octopus. After Bender kills it in a climactic battle (ending with a shootout), he finds a giant "nickel" featuring The Vitruvian Man at the bottom of the fountain. As Bender grabs it, he discovers it's actually a giant drain plug, which sucks Bender into the sewers. The rest of the Planet Express Crew follows. As they enter the sewers, so does a mysterious hooded figure.

Emerging in the Pantheon, they discover a statue of the Vitruvian Man and a giant coin slot. When putting in Bender's "nickel", the man moves and reveals da Vinci's secret workshop. As they observe the inventions, the cloaked Animatronio shows up and attacks them. He is immediately knocked down by Bender and once again feigns death. The Professor and Fry sit in da Vinci's nonfunctional flying machine. A chain of Rube Goldberg machine events occur to put the machine in space. The Professor realizes it didn't work in air because it's not supposed to - it's a space ship. The flying machine blasts off with Fry and the Professor in it.

After a month of flight in space, the flying machine lands on an Earth-like planet. There they meet Leonardo da Vinci who explains that he is actually an alien from Planet Vinci who visited Earth centuries ago. The aliens of the planet are incredibly smart, Leonardo being the stupidest person and for that reason leaving for Earth to feel intelligent, only to return when he became annoyed at being surrounded by unintelligent people. Leonardo explains that he used to enjoy himself inventing, but that he since he lost the plans for his masterpiece, the Macchina Magnifica, he can't find solace even in that. Fry shows the sketch for the lost invention they found, and Leonardo says it's the one.

Fry and Leonardo find friendship, both being the stupidest of their planet. They build the Macchina Magnifica together. Meanwhile, the Professor finds trouble, feeling inferior and stupid during mathematical lectures on the planet. Finally the day comes for the big reveal of da Vinci's brilliant invention, and he shows off... a doomsday device! His plan is to have his revenge and exterminate everyone who has ever made him feel inferior. Fry protests, as he was told it was an ice cream machine. The Professor, too, joins Leonardo, as long as they kill his math teacher first.

The doomsday device barely kills anyone, but Fry manages to stop the device by falling inside it, jamming the gears. In a last attempt, Leonardo pulls a lever for a final attack, but the machine malfunctions and a cog falls on Leonardo, presumably killing him. Fry and Professor head to the flying machine and travel back home.

In its original American broadcast, "The Duh-Vinci Code" was viewed by an estimated 2.204 million people, a rise of nearly 200 000 since "Proposition Infinity".[1]

Prof. Farnsworth: I hate these nerds. Just because I'm stupider than them, they think they're smarter than me.

Fry: Well, I may not have brain smarts, but at least I have street smarts. [He is run over by a hoverbus.]

Fry: I was in the hospital two weeks. No one visited me.
Prof. Farnsworth: Quiet, you! I'm trying to deduce the function of da Vinci's lost invention.
Fry: Not even a card. 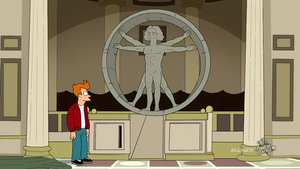 The statue of the Vitruvian Man does not have genitalia, but Fry mentions "his dong". 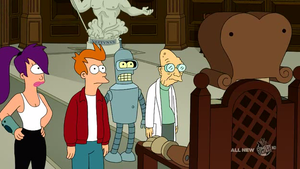 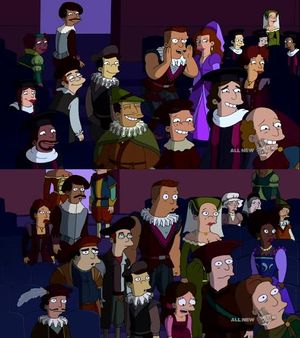 The crowd around Biff changes completely after Leonardo da Vinci gets crushed. 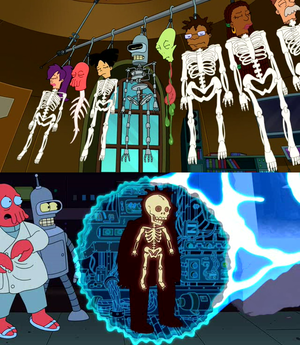 Hermes' skeleton in "Rebirth" (top) and in this episode (bottom).