A Fishful of Dollars

Fry's bank account from 1999 has grown into a large fortune thanks to its interest rate. Upon finding out that anchovies, his favorite pizza topping, have gone extinct, Fry spends his fortune on obtaining the last can of the fish in the world, putting him at odds with Mom who sees this as a potential threat to her oil business.

Fry is trying to sleep, but is kept up by a rhythmic squeaking from the next apartment. A pan through the wall reveals a pair of spring-bodied robots playing cards.

Fry has a dream; he's in a class, the teacher tells him he is only wearing his underpants, which triggers a Lightspeed Briefs commercial. When he tells his co-workers, they tell him it was just an advertisement, which are now broadcast into people's dreams. In spite of everyone's claims not to be affected by the dreams, they all run to Alien Overlord & Taylor. Amy is stopped by a perfume saleswoman, a cosmetologist makes Leela "prettier" by drawing attention from her eye and Fry wants to buy a pair of Lightspeed Briefs but discovers he can't afford them, while Bender steals a lot of stuff, including many Mom's Old-Fashioned Robot Oil cans. Mom, who Fry had never heard of and learns from Amy that she's the world's most huggable industrialist, appears on TVs advertising her robot oil, and Fry suggests Bender should buy it but he is busted by the cameras. When they're trying to bail Bender out, Fry discovers his old bank account is still open. The teller tells him thanks to compound interest, his $.93 has grown to 4.3 billion dollars.

Fry's new-found wealth immediately goes to his head. He spends a fortune taking his friends out and doing whatever expensive, ridiculous things they can think of, such as celebrating at Planet Express wearing top hats and visiting Le Spa. When he tried to buy his friends dinner, Professor Farnsworth tells Fry that his favorite pizza topping, anchovies, have been extinct for 800 years, thanks to Zoidberg's species who loved anchovies and ate them all. Fry tells them they were delicious. Later, they go to an auction and Fry gets into a bidding contest and buys stupid things spending a lot of money. He fights Mom raising the money for the last known can of anchovies in the world, which he ultimately buys for 50 million dollars. Fry begins to turn inward, immersed in his private recreation of the 20th century.

Mom reveals to her sons that anchovies represent a potential source of a super lubricant that would put Mom's Friendly Robot Company out of the oil business, costing her billions. She plots with her sons to get Fry's anchovies back, by tricking Fry into revealing his pin number - "the price of a cheese pizza and a large soda" at Panucci's Pizza where Fry used to work. They drug Fry and place him in a staged scene in Panucci's, where Walt, dressed as Mr. Panucci, tells him he just dreamt he was in the future, then Pamela Anderson's head (on Igner's body) enters and places an order, a cheese pizza and a large soda. Fry stupidly falls for the obvious trick and reveals his pin number. Mom steals Fry's money, and tries to extort the can of anchovies out of him. Fry refuses, insisting that it is more important to share the anchovies he loves with his friends than to be rich. Realising Fry doesn't know the secret of the anchovies and her oil monopoly is safe, Mom leaves. Fry puts the anchovies on a pizza, but with the exception of Dr. Zoidberg (Who threatens Fry for seconds), his friends hate them. 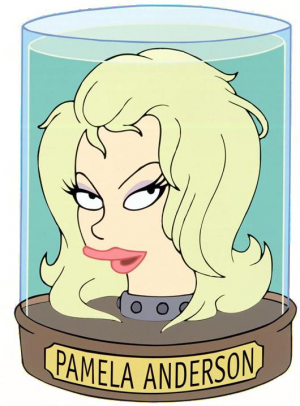 Click here to see revelations about the future made in this episode.

Fry: I've discovered something even more important. My friends. And they aren't worth even a penny to me!

Fry: Uhm, I've missed a few lectures. What subject is this?
Teacher: Ancient Egyptian Algebra!
Fry: Ahh! What a nightmare!
Teacher: Mr. Fry, are those your underpants!?

Bender: We thought you only cared about cans of anchovies and stuffy old songs about the buttocks.
Leela: Goodbye...
Bender: Weeeee!