"Love's Labours Lost in Space" is the fourth episode of Futurama, the fourth of the first production season and the fourth of the first broadcast season. It aired on 13 April, 1999, on Fox. The Planet Express crew is sent off on a mission of charity to save animals from the doomed planet Vergon 6, there Leela finds a relationship between herself and Zapp Brannigan she did not expect. The episode also introduces Nibbler, who Leela adopts as a pet.

Leela is in a restaurant, on a date with a guy named Doug. Things are going well, until she sees his "vile lizard tongue," of which she is immediately disgusted.

After hearing about the date from Leela, everyone dismisses Leela as being too picky with the men she goes out with. Wanting to help, Amy, Fry, Bender, and Zoidberg take Leela to a trendy dance club, The Hip Joint, to find a man for Leela, most of whom Bender dismiss as being gay. While Fry ends up going home with a girl from the 21st century, Amy with an entity of pure energy, and Zoidberg with a lobster, Leela goes home alone (a kind janitor makes an advance on her before noticing her eye).

The next day at work, the Professor assigns them a mission in which they are to go and rescue endangered animals from a planet called Vergon 6 which was formerly filled with dark matter, a substance currently used as spaceship fuel, but was mined completely hollow and is set to implode. This immediately piques Leela's interest, due to her concern for the safety of animals. On their way to the planet, Fry and Bender discuss with Leela her specific interests in a man. Leela describes her dream man as being adventurous and self-confident, and maybe a snappy dresser, currently unaware that an apparent contender, Zapp Brannigan, is nearby.

The crew notice Zapp Brannigan's ship, the Nimbus, at Vergon 6. Leela appears to become smitten with him due to his reputation as being the most decorated officer in the DOOP, despite not having formally met him; however, it is already heavily implied that Zapp is actually a pompous buffoon. Leela decides to meet Zapp personally for help with the mission, but Zapp begins hitting on her instead. He then has them arrested as their mission breaks his law of interfering with other planets, despite the fact that it was his organization that interfered with Vergon 6 by mining it hollow. Zapp later has Leela sent to his room in an attempt to seduce her. Leela is unimpressed with his advances and states she would much rather go back to her holding cell than be in the same room with him. Suddenly, Zapp begins to cry and lament his loneliness as a captain. Leela is overwhelmed with pity for this man, as well as some sense of regret, and tries to comfort him; the next morning, she wakes up in horror to find that she has just slept with him.

Smug with satisfaction over "scoring" with Leela, Zapp releases them all and allows them to break his law, claiming that it won't be long before Leela's feelings for him would take over once more and cause her to come crawling back to him. Leela refuses to mention her run-in with Zapp to Fry and Bender. They begin scouring the planet as quickly as possible for animals and loading them onto the ship. In the process, Leela comes across a strange creature, whom she names Nibbler. While they are hunting for the last animals, Nibbler eats all the animals they have captured, much to their chagrin. Suddenly, the planet begins to implode, and they find that the ship's engines are dry. Fry and Bender suggest they turn to Zapp for help, but Leela refuses to "come crawling back" to him; Fry and Bender deduce from this, and the rest of her strange behavior, exactly what happened between her and Zapp. They chide Leela for ignoring her standards for men before pleading for her to ask for Zapp's help. Zapp agrees on the condition they leave Nibbler behind. Leela turns him down flat altogether, and the crew decides to wait for imminent death when Nibbler drops a load of dark matter in his litter box. They take the fuel to the engines, and they escape just in time before the planet implodes. They see that a few animals (very few, as a matter of fact) managed to survive and are living on a small rock that remains of the planet. Since "a couple of animals didn't die and Leela got lucky," the mission is deemed a success. Leela appears (partially) content with finding Nibbler to keep as a companion instead of a man. Meanwhile, Zapp Brannigan's obsession with Leela begins...

The character of Zapp Brannigan was originally supposed to voiced by Phil Hartman, who had done work on The Simpsons, such as the memorable Troy McClure, but after his death in 1998, Billy West took over the voice acting for Brannigan.[1] The episode served for several important introductions, such as Nibbler, whose later importance would be revealed in "The Why of Fry", the character of Zapp Brannigan, and his relationship with Turanga Leela.

The Lovenasium on the Nimbus took a lot of design, and is the most detailed room on the Nimbus.[1] During the scene where Zapp Brannigan is lying down, talking to Leela, his gut was supposed to grow in every shot, but eventually, it got too big for the animators who decided to go no further.[1]

In 2006, IGN ranked it as the 2nd best episode on its list of top 25 Futurama episodes. IGN ranked Zapp Brannigan as the best character on Futurama, and acclaimed this episode to its brilliant introduction of his Kirk-esque character, and the scene with Leela and Zapp is one of the funniest during the entirety of Futurama.[2] 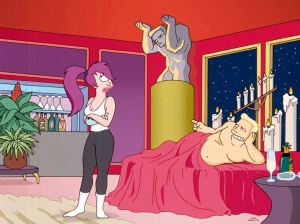 Note: Several animals appear in the ship's hold that don't seem to correspond to an animal on the list.

The centerfold for the 2002 calendar. This is also used as a poster for the episode, similar to "Space Pilot 3000".

Zapp Brannigan: So, crawling back to the Big Z like a bird on its belly. Delicious.
Leela: Birds don't crawl.
Zapp: [quickly] They've been known to.

Kif: The jackass wants to see you in his quarters.

Leela: So we have to bring back two of each kind. Just like Noah's Ark!
Bender: Why two?
[Leela whispers something in Bender's ear]
Bender: Aw! Heheheheeh!

Bender: He's pending for a bending!

[Vergon 6 is beginning to collapse]
Fry: Man, lucky for us Zapp Brannigan's nearby.
Leela: No way! Forget it! I refuse to go crawling back to him!
Fry: What? What are you talking about?
Leela: [defensively] Nothing. We just talked.
Bender: So what's your problem? It's not like you slept with him. [Leela hangs her head in shame.] Oh, my God!
Fry: How could you, Leela? I thought you had some standards. I mean, jeez, he's a dumb, gross gorilla!
Leela: That's enough! Don't you think I feel bad enough already?
Fry: No!
[The ground shakes violently.]
Leela: Alright, alright. I'll call him. I mean, if living is that important to you.

Zapp Brannigan: Hmmm, that's got a nice feel to it.

Kif: I suppose, Captain. I'm not as big a fan of velour as you are.