Mom, real name Carol,[6ACV18] is an elderly woman and the owner and CEO of MomCorp and its multiple subsidiary companies, such as Mom's Friendly Robot Company. While having the public face of a kind old woman, she is in reality bitter, cold-hearted and evil. She is among the most recurring antagonists of Futurama, as well as the old love interest of the Professor.

In public Mom appears to be a sweet and motherly old woman. However behind this facade is an evil, bitter, malevolent and sometimes maniacal woman, who wants to take over the world. She is often abusive to her sons, slapping them regularly and also says that robots made her "sick to my ass" even though her company makes them. Mom was once in love with Hubert Farnsworth but breaking up with him was what caused her to become such a bitter woman.

Her public body is stereotypically motherly - fat and frail, usually in a rocking chair, but in private she takes off her fat-suit and is slim, usually sporting a skintight blue suit and tall black boots.

Little is known of Mom's life before forming MomCorp. A company named "Friendly Robot Company" already existed in 2801, probably later taken over by Mom. However, in 2881 Mom was already constructing the first robots of the first robots, working alongside inventor Hubert J. Farnsworth, who she had an on-again off-again relationship with through many years. One of the first robots was the highly polluting Sport-Utility Robot created by Farnsworth. In 2927, Mom sent her army (including Farnsworth and Zoidberg) on a yeti-hunting trip to Triton. In 2972, Mom was hired by DOOP to lead the dark matter mining in Vergon 6.

Professor Farnsworth is the father of Igner, the youngest of Mom's three sons, but did not know this for many years until 3009. Her other sons, Walt and Larry, have still questionable paternity, however it's possible that Mom's first husband, Dr. Ogden Wernstrom, is their father. Despite having been married before, Mom has claimed that Professor Farnsworth was "the only man I ever loved".

Mom's Cornwood alternative is Momon, a witch-like being representing her evil personality.

Mom and the Professor briefly got back together on "Mother's Day", but she broke it off when she discovered that, although the Professor's feelings had become genuine, their meeting was a ploy to get the controller to stop the robot rebellion. As such, their conflict continued, and continues to this day.

She appears in Bender's Game under the identity "Momon" and eventually becomes a dragon that does battle with Fry, also a dragon.

Mom has at least on several accounts had a relationship with Professor Farnsworth. Farnsworth initially worked for Mom's Friendly Robot Company, where he designed robots for the company as well as toys, such as Q. T. McWhiskers, but Mom's suggestion of turning the toy into a giant superweapon caused Farnsworth to leave her and conflict developed between the former lovers.

Farnsworth would later return to Mom's company to work on creating actual robots. At the time robots were stiff moving and not very efficient, however, when Farnsworth sacrificed fuel efficiency, he succeeded at creating a sportier robot, the design for which would be the primary cause of global warming. What caused Farnsworth to leave this time is unknown, but it is likely that it was Mom's evil nature.

On a third occasion, Farnsworth was once again at the company with Mom, where he discovered the secret of Dark Matter, around the time where Mom's sons were born. But when Mom revealed her plans to leave Farnsworth for her former husband, the relationship ended again.

Surprisingly, as revealed in "The Tip of the Zoidberg", she has a close friendship with Zoidberg, even being on first name terms with him, asking him how he is and regretting that if he'd stayed with her, he could have been rich and successful. 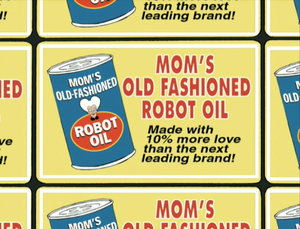 Mom: Shove a big old squirrel in it!

Mom: Jam a bastard in it, you crap!

[deleted scene] Mom: Make that bitch your bitch, you bastard!

Walt: Mommy!
Mom: What is it, you colicky bastards?!
Walt: We were playing video games and the other kids didn't play fair!
Mom: What?! Nobody rips off my kids but me!