Realizing that Zoidberg was an innocent creature she killed, Leegola storms off weeping, and swearing never to hurt a living being again, though managing cutting Zoidberg's head off in the progress. At the centaurs dwelling, she asks to learn of their ways.

Meanwhile, the actual Tunnelling Horror shows up. Frydo is the only one not busy by something else (as Greyfarn and Gynaecaladrial are making out and Titanius is being beaten by the Tunnelling Horror), he attempts to throw everything in his pockets at it, but throws the Die of Power in the progress, which rolls 3, and he grows big enough to destroy the Tunnelling Horror, after which he shrinks down again and finally becoming seduced by the die's power, taking on a Gollum-like character.

At the feet of Momon's armies, the fellowship decides to go to Wipe Castle the next day to gather an army.

During the night, Frydo or Frollum (or Freedle, for what it matters) finally loses himself and tries to kill Titanius. Fortunately, he was lying in Gynecaladriel's bag, and Frydo is discovered before he can hurt anyone, at which he runs off for himself. Momon, finding out about their plan, orders all her forces to Wipe Castle.

The rest of the fellowship finally reaches Wipe Castle, where they found out that the king has sent the entire Royal Army to their death.

The Army of Momon finally arrives at Wipe Castle, in an epic, yet one-sided struggle. Wipe Castle remains some resistance, with Titanius, Gynaecaladrial and Greyfarn each using their own methods to fight off the attackers. Meanwhile, the centaurs having noticed the war, calls for an act from their leaders.

Leegola manages to convince the centaurs to act, (when Hermaphrodite challenges her to debate, Leegola beats the crap out of them and leads the centaurs to war, though they insist that they won) and their skilled archery saves the day against Momon's army and rescues Wipe Castle (as a reward, Gynaecaladrial kisses her, but it swiftly gets more and more passionate). Meanwhile, Frydo finally reaches to The Geysers of Gygax with the help of Zoidberg's head. Having noticed the effect on the world, the fellowship decides to ride out to help Frydo with destroying the Die of Power (but not until they're finished watching Leegola and Gynaecaladrial make out).

But at Momon's cave, Frydo cannot get himself to throw the Die in, having become seduced by its power. Zoidberg bites him on the butt, causing him to drop the Die, rolling it. Momon reacts by turning into a dragon, while Frydo rolls 12, "Mirror Mania", to which he becomes a dragon as well. While battling, the rest of the gang shows up. Frydo and Momon defeat each other out by injuring each other's soft underbelly (a dragon's one weakness).

The rest of the fellowship have become trapped because of the fragile staircases Momon destroyed. Ignis decides to help them on a giant bug, but Greyfarn becomes annoyed because Ignis cannot see it is a spider, not a bug due to the amount of legs. In anger he ignites his staff, and Ignis pulls out a lightsaber. They battle, until Ignis explains that Greyfarn is actually his father. Learning this, Greyfarn falls over the staircase and lands over Zoidberg who had obtained the Die, letting it roll into Momon's hands, who finally finishes everything off.

Through the same hole, the crew all winds up in their own regular crazy world, where Farnsworth explains Bender's wild imagination created an alternative reality for them all. But before Mom can retrieve the crystal, Farnsworth asks for the request of hugging his son, Igner. While hugging, Igner reveals that he swallowed the other crystal, allowing the crystals coming close enough together to render all dark matter useless. Farnsworth then reveals his alternative fuel source; Nibbler Power! Which is basically strapping a chick to a stick, and letting Nibblonians follow it, dragging the ship. 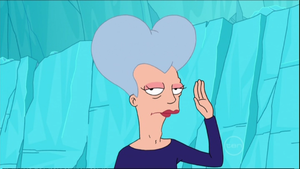