From The Infosphere, the Futurama Wiki
Jump to: navigation, search
Disputed canon

Not to be confused with Anthology of Interest II (comic).

Bender asks the What-If Machine what it would be like if he were a human. When the machine is started up, it tells a story of how Professor Farnsworth transforms Bender into a human using "reverse fossilization". Bender uses his new body to over-indulge on junk food, beer, sex with beautiful women, and cigars, much to the dismay of the Professor, who wants to keep Bender in top shape and present him to the Nobel Prize ceremony a week later. Bender spends the entire week on a massive binge. He is discovered shortly before the ceremony, weighing about 1000 lb, with liver failure, and chloresterol at 40 lb. The committee threatens to kick the Professor out of the Academy of Science, but Bender urges the committee to keep an open mind and try his hedonistic lifestyle. They accept his request and hold a wild 12-hour-long party, realizing that they prefer Bender's way of life. They attempt to award him a Nobel Prize, but then discover that Bender has been dead since shortly after the party started and that his cry of "Whoo!" is actually air escaping from the folds of fat on his body.

The next question the machine is asked is Fry's "What would life be like if it were more like a videogame?" The story begins in outer-space in the form of the game Asteroids. The green ship (Planet Express Ship) shoots and dodges asteroids before safely returning back to Earth. Richard Nixon's head is signing a peace accord with the ambassador Kong of the planet Nintendu 64. But, things go wrong with the peace agreement when (Donkey) Kong throws a barrel at Richard Nixon's head and abandons the peace signing, much to the distress of the Italian Ambassador. The story then cuts to Milatari HQ, with a green tank from the game Battlezone passing by. Fry, Leela, Bender and Zoidberg rendezvous with General Colin Pac-Man. Gen. Pac-Man leads them through a Pac-Man-like maze, where Zoidberg accidentally eats Fry, who, luckily had an extra life. They exit through a Mario warp pipe outside Planet Express headquarters. They find out there is another force threatening Earth. Lrrr, of the planet Nintendu 64 has decided to invade Earth with his "3 different kinds of ships." Fry grabs his all-Rush mix-tape and his bottle of Shasta and starts to battle the Space Invaders. During the battle, General Pac-Man is fatally wounded, which he reveals is the day before his retirement and his wife Ms. Pac-Man cries over his death while being consoled by Amy. Fry eventually loses after realizing he could never get the last ship, his brother always did. After Fry enters 'ASS' as the initials for high score, the last Space Invader ship lands on Earth and announce "All your base are belong to us." Their demand is simple: quarters, a million allowances' worth of quarters. The Planet Express crew refuse to accept their offer, but reach a compromise by allowing the space invaders to toss their laundry in with the Planet Express crew's. 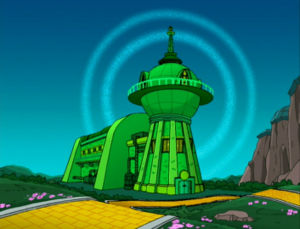 It's Leela's turn to ask a question; she asks what it would be like if she found her true home. But she accidentally gets knocked out by the What If Machine's gambling machine arm. Leela wakes up to find herself and Nibbler caught in a tornado in the Planet Express Ship, which crash lands in Oz. After realizing she crushed the Man-Witch of the West (Scruffy), the deceased witch's boots appear on Leela's feet. Leela is confronted by a group of various Futurama characters wearing Lollipop Guild costumes who accuse her of stealing the boots. She asks who they are and gets a song about them resembling, 'but legally distinct from the Lollipop Guild,' which is cut short by Nibbler, who eats Glurmo. The Cute Witch of the North (Amy) appears, and informs Leela that the only way for her to get home is to see the Professor in the Emerald Laboratory on Martin Luther King Boulevard. As Leela travels down a yellow brick road, she meets the Scarecrow (Fry) and the Tin-Man (Bender), who travel with Leela to find the Professor. Fry needs to see him about a brain and Bender needs a heart (so he can "pump a lot of blood out of [his] basement"). Zoidberg appears in a taxi to represent the Cowardly Lion although he refers to himself as "the other guy. Courage. Not enough of it". Overlooking this is the Wicked Witch of the West (Mom) who decides to send her flying monkeys (Walt, Larry and Igner) to capture Fry, Leela and Bender. Zoidberg is left behind and ends up taking a taxi. The trio finds themselves in Mom's lair, where Zoidberg enters after leaving his taxi. Leela demands to know why they were brought to her, which Mom answers--Mom never had a daughter. Leela thinks momentarily and agrees to become Mom's daughter, due to the fact that she'd love to be evil. But, as Bender gets a celebratory drink out of his chest, the liquid spills over Mom and she starts to melt. Bender drinks her puddle because there was 'no point in letting her go to waste.' The group then take a taxi to the Emerald Laboratory to see the Professor. Hermes tells them that no one sees the professor and will not open the door to his chamber, but Leela pokes him in the eye and they barge in. The Professor gives Zoidberg a gun, because 'who needs courage when you have a gun?'. Bender takes the gun and tells the Professor to give him all his money. The Professor pours a bag of cash on the table and tells him that it's 5000 professor land fun bucks. The Professor says that Leela must get home by clicking her boots together three times, but she instead wishes to be the new Wicked Witch. Her first act as a witch is to transform Fry, Bender, and the Professor into frogs. A flume of water lands on her from above, which Zoidberg reveals was from a problem with the upstairs toilet. Leela melts into a puddle, then wakes up as Fry dumps another bucket of water on her face. She looks around and exclaims that she was 'having the most wonderful dream, except you were there and you were there and you were there...'

The Professor is heartbroken to discover she has awoken, having entered the room with a pair of tongs and a box with "Leela's Organs" written on the side. Hermes informs the Professor there's always next year to try. 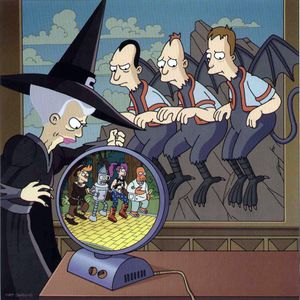 Bender: Being a robot's great, but we don't have emotions and sometimes that makes me very sad. [sniffs]

Professor Farnsworth: I've already tested it by turning the toaster into a raccoon.
[Toast pops up from raccoon]
Fry: Hmm, kinda gamy.

Bender: Hey, my antenna's gone! Nah, it just moved. I'm not getting good reception on it, though. Maybe if I wiggle it around a little...
Fry: Bender, no! You'll make God cry!

Bender: Whoa, you look better than you used to for some reason.
Amy: You're not so bad yourself, big boy. [kisses Bender]
Bender: Hey that felt great! [kisses the Professor] Nah, it's not working anymore.
Professor Farnsworth: Speak for yourself.

Bender: Why didn't anyone tell me tasting things tasted so good?

Narrator: You watched it, you can't un-watch it! Stay tuned for more TALES OF INTEREST!!!!

"Raiders of the Lost Arcade"

Nixon: Good evening, ignorant pigs. Put down your crack pipes and your beer bongs and pay attention as I sign an historic peace accord with Ambassador Kong of Nintendu 64.
Fry: Hey, I know that monkey, his name is Donkey.
Professor Farnsworth: Monkeys aren't donkeys. Quit messing with my head!

General Pac-Man: Let's get one thing straight. What do you know about the Nintendians?
Fry: I spent all of ninth grade studying them except the day my eyeballs started to bleed...

Q*bert: Ereh dnuora stnap emos teg yug a nac erehw? (Which is the phrase "Where can a guy get some pants around here?" backwards)

Fry: Alright, it's Saturday night, I have no date, a two-liter bottle of Shasta, and my all-Rush mix tape. Let's rock!

Leela: Why did you bring us here?
Zoidberg: And why did I have to take a cab?!

Mom: I'm melting! Oh, who would have thought a small amount of liquid would ever fall on mee--? [melts away into a puddle]

Leela: [clicks her heels three times] There's no place like - I WANNA BE A WITCH!

Zoidberg: [after the water has fallen on Leela's head] Err, sorry, there seems to be a problem with your upstairs toilet.

The second story pays homage to many video games including in alphabetic order: