"In-A-Gadda-Da-Leela" is the ninetieth episode of Futurama, the second of the sixth production season and the second of the seventh broadcast season. It aired on 24 June, 2010, on Comedy Central. It guest-stars Chris Elliott as the V-GINY censor ship. When a death sphere is threatening to destroy Earth, President Nixon calls for Professor Farnsworth for a plan. The Professor has devised an undetectable ship which Leela and Zapp Brannigan must use to get into the death sphere and destroy it. But not all goes according to plan.

After Zapp Brannigan dreams about The Transcredible Exploits of Zapp Brannigan, he is called to the Secret White House, where President Richard Nixon has bad news. A death sphere has been seen destroying planets in nearby systems, and they now know it is headed for Earth. But when Zapp Brannigan is too cowardly to devise a plan, Nixon decides to try and ask a man he once deemed crazy, Professor Hubert J. Farnsworth. The Professor, acting on the fact that every death sphere has a small weakness, has devised a plan involving a Tiny One-Man Stealth Fighter.

After some deciding about who should go, they decide to send Turanga Leela and Zapp Brannigan together. They lift off at Cape Knievel. Although the ship itself is perfectly cloaked, its occupants remain clearly visible, and appear to be floating. As they approach the death sphere, we see the letters V-GINY across it and lots of surveillance on its surface.

Meanwhile, back on Earth, the Professor is trying to figure out what the V-GINY is. But as it does not exist in any known catalogue, he assumes his thinking in his Chamber of Understanding.

Turanga Leela and Zapp Brannigan enter the sphere, which seems to be censoring television broadcasts by spitting black goo on them. Leela and Brannigan are spotted, and narrowly escape but lose control of the ship. 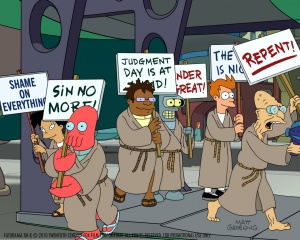 A promo pic showing the Planet Express crew warning people about the end being near.

Leela and Brannigan awake in a jungle. Leela's legs are pinned underneath a tree, which Brannigan cannot lift. Leela complains that her spacesuit is too hot, and Brannigan suggests taking them off; they do so and put on leaves to hide their 'naughty bits'. Leela notices that Brannigan is strangely considerate, trying to help her out while pinned. Brannigan goes to forage for food.

Back at Earth, Fry is beginning to wonder about why Leela isn't back yet, much to the annoyance of Bender, who feels he is being a third wheel. And while the crew discuss how best to make use of their time as the death sphere approaches, Farnsworth announces he has identified the death sphere to be a fusion of two satellites that collided: USAF Flying Destiny and FCC V-Chip. Farnsworth has further discovered that the ship is just acting in its programming, and thus destroying indecent planets, like Planet XXX, Poopiter and That world that can't be mentioned in polite company. Farnsworth's plan is to convince the people of Earth to be less indecent, so that the censor ship may reconsider destroying it.

Meanwhile, Brannigan returns with nuts and fruit berries for Leela. He explains that there are no intelligent life to be found on the planet, and that the ship was destroyed in the crash. Brannigan remarks that the planet is sort of like the Garden of Eden. A talking snake appears to explain how their situation is just like Adam and Eve, but Brannigan dismisses it as delirium from dehydration.

In New New York, Farnsworth's plan goes under way to convince people to be more decent, but it takes the form of a "The End Is Near" protest, which is easily dismissed as crazy. They see Sal attempting to pay five dollars for a night with Petunia, who announces she could go for just three dollars, much to Sal's disgust, and thus goes into the Pubic Library (and not public library as Fry thought).

The talking snake continues to urge Leela to mate with Zapp. Meanwhile, Zapp fetches the telescope so they could view whether Earth was still whole. On Lo'ihi Island in the Pacific Ocean on Earth, the Planet Express crew makes one desperate attempt to convince the censor ship of there being some decency left on Earth. However, during their purity chant, Bender cannot keep it in his pants and mates with the satellite dish.

Leela watches V-GINY destroying the Earth. Leela becomes convinced that perhaps she should attempt to recreate the human race with Zapp. As they discuss their plan for their new humanity, an apple falls onto Leela's head, who begins seductively suggesting a kiss to Zapp.

Act III: "Approved for all audiences!"

Leela remarks that the apple has ameliorated her dehydration, unlike the nut berries that Zapp brought, which were exactly as salty as Fry's trail mix. Her questions then wring a confession from Zapp, piece by piece, that everything he has done since the crash has been a scheme to get into Leela's pants: he brought the trail mix from the ship, which is not destroyed; he even placed the tree over Leela's legs.

As they are talking, Fry arrives on the scene. Leela wonders how he ended up on this planet as well, after she saw Earth explode; Zapp confesses that the destruction was simply a visualisation created by the ship's holographic targeting projector. Leela beats up Zapp.

And just as they reunite with the crew, the V-GINY arrives. V-GINY explains that the Earth may yet be redeemed if Zapp and Leela make love like Adam and Eve. Leela complies, to save her world, but Zapp has performance anxiety. The crew is horrified by the act and Fry demands V-GINY censor it, but it instead, ironically, decides to label their activities as 'approved for all audiences' and then leaves Earth.

Now that Futurama is on Comedy Central, a cable channel, the writers and producers can be a bit more lenient about the show's content.[2] David X. Cohen stresses that they aren't doing anything that wouldn't have been accepted on its former network, FOX, but they are doing more of it than the FOX censors might have accepted.[2]

In an interview to Entertainment Weekly, David X. Cohen reveals that the plot, being Matt Groening's brainchild, plays on the Adam and Eve trope wherein two characters must "recreate" an entire species as the lone survivors. In this episode, Zapp Brannigan and Leela land on a Garden of Eden planet, but unlike the trope, this part of the plot occurs in the beginning of the episode, and never actually gets to the reproduction of the human species.[2]

This episode was subject to censorship by itself and Channel 4.

It received mixed reviews, some people saying it was better than "Rebirth" due to it being a standalone episode, but most people saying it was not as good. A great portion of the Futurama fans hated the ending, and many of them did not like that Fry and Leela's relationship was probably in a strange limbo once again. There have also been complaints about Leela's lack of devotion to Fry. Many fans were also disappointed by the frequency of jokes about sex.

When Leela and Zapp travel through the V-GINY (a massive censoring module), the viewer can see tens of screens with different shows, including many commercials and shows previously seen in the Futurama universe.

A number of inside references are seen when Leela and Zapp travel through the V-GINY. 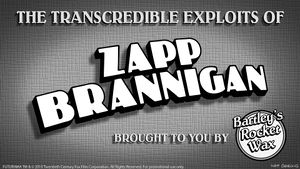 Zapp: Mr. President, what the hell?

Bender: I haven't felt much of anything since my guinea pig died.

Fry: Granted, all that makes perfect sense, but why is this death sphere destroying planets?
Farnsworth: That makes the most sense of all. [Farnsworth puts up a projection of planets destroyed by the death sphere.] Look at the planets it's destroyed so far. First came XXX, the nude beach planet. Then Poopiter. [A planet labelled "#[email protected]€$!#%&" comes on screen.] And finally that world that can't be mentioned in polite company.
Fry: You mean...
[Fry whispers something to Farnsworth and the crew get angry at him for doing so.]
Amy: Aw!
Farnsworth: How dare you!?
Amy: Shame on—
[Farnsworth slaps Fry.]