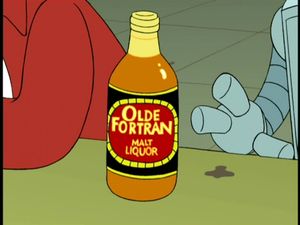 Fry and Bender behind a bottle of Olde Fortran Malt Liquor at O'Zorgnax's Pub in 2999 (1ACV01).

Alcohol is a liquid drunk both by robots and living beings.

Humans drink for a feeling of inebriation ("drunkenness"), while robots drink to fuel their power circuits.

When a robot such as Bender is deprived of alcohol, they move into a "drunken" state in which they generate rust around their mouths and it becomes dangerous for them to drive (1ACV03).

An alternative to alcohol is drunk by robots who practice robotology; known as mineral oil (1ACV09).

In 3011, a swarm of tiny duplicates of Bender turned all of Earth's water into alcohol, causing the inhabitants of Earth to be in a constant state of drunkenness (6ACV17).

Alcohol appears in almost every episode of Futurama. Because of this, this list only includes appearances that reveal significant information or play a large role in the plot.