All My Circuits is a TV show sometimes viewed by the Planet Express crew. It stars mainly Robots, with a single token Human. In 3001, a movie based on it was released. The show seems to have evolved from 20th century soap operas, though is much more exaggerated and melodramatic. Its name is a reference to the soap opera All My Children from our time. 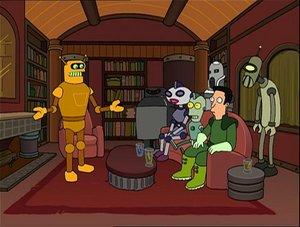 The cast of All My Circuits

Calculon and Monique are sitting in a garden when Calculon asks Monique to marry him. Monique is surprised to see that the ring fits saying Calculon must know she's metric. Calculon says he's always known and they make out while in the bushes Boxy secretly watches them. The scene switches to Human Friend who is sitting on a desk laughing. Calculon enters and Human Friend says he thought he was in a coma. Calculon reveals that's what he wanted him to think with his soft pitiful human brain.

Its Calculon and Monique's wedding and they have nearly got married when Boxy objects and Calculon reveals his terrible secret. A priest at Calculon's funeral says a speech mourning Calculon's death when Calculon intervenes revealing he's alive

Calculon is shocked to find Monique and Boxy in the same bed. Calculon reveals that Boxy is his half-brother and there is no law against killing the other half.

Calculon is in hospital and doesn't know what has happened and the doctor seems reluctant to tell him. The doctor finally says that Calculon's entire family was killed in a plane crash piloted by his bride-to-be, the crash also destroyed his uninsured home and he has inoperable cancer.

Antonio reveals that he has Amnesia. The scene switches to a boat where Monique has a gun pointed at Antonio. Before she shoots him she wants him to say her name which she can't remember because she has amnesia. Calculon then asks if anyone in the room doesn't have amnesia. After the flashback Calculon has a birthday party with a nude rocks band and big piles of "talcum powder"

Antonio has learned a secret his mother kept from Calculon for over 200 years, but he malfunctions before revealing it. [casting sessions for the new actor reveal that Calculon was not his real father and that he intended to join the robo-bandidos at Veracruz]. Bender, the new actor, causes a re-write putting Antonio in a permanent coma, but Bender rejects this, becoming Bender, a (sort of) fictionalized version of himself.

Over multiple episodes, Bender becomes the star. He ruins Human Friend's wedding and several of Monique and Calculon's dates. Later Calculon performs Boxy's wedding and declares that he has six months to live. Bender then makes a closing announcement. 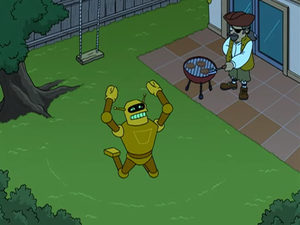 On Late Night with Humorbot 5.0, Calculon presents the audience with a clip from All My Circuits, which, according to Calculon, is self explanatory. The clip contains him in a backyard, with a human dressed as a pirate grilling hamburgers, where he goes down on his knees and yell his melodramatic no. After the clip, he explains to Humorbot 5.0, that the script initially called for him to say "yes", but he gave it "a little twist".

Calculon's motherboard (not the one built into him) reveals that he is adopted.

Shown in: The Beast with a Billion Backs

Calculon and Monique are approching a large mansion with Calculon explaining that it is where his blackmailer lives. As he knocks on the door a butler greets him and Calculon realizes that it is his mansion. He asks Monique why she didn't tell him and she says that he has a fourth personality that the other three don't know about, and that it and she are lovers.

Calculon gets a letter from his nephew's kidnappers, telling him that he is alive, and in the envelope he is holding. He proceeds to open it, finding his nephew inside. He tells Calculon that the kidnappers cut off one of his dimensions, and Calculon and Monique start to weep.

Monique and Boxy are making out in the back of a carriage and to their surprise, Calculon is the driver. Monique realizes this must mean that it was not Calculon who was killed when a bomb went off. Calculon asks what she is talking about and then explodes. Monique and Boxy continue to make out afterwards.

Calculon, Monique, Boxy and the robot boy are in a room. Calculon says that he knows that one of them is a murderer, before revealing that it is him. He announces that the answer of who the victim was is a secret he shall take to his grave. He takes out a sword and stabs himself, then writhes in pain.

In addition to episodes, the show has occasionally spun-off into films. 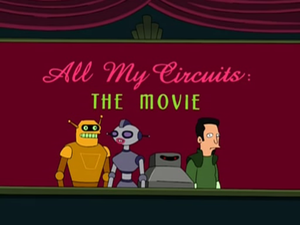 All My Circuits: The Movie

All My Circuits: The Movie

Calculon falls in love with a fembot named Coilette, and planned to marry her. Coilette, however, is killed by Congo Jack, for stealing precious stones. This is based on his true incident with Bender, after his gender surgery. It is likely that this was not an All My Circuits film.

Besides regular episodes, there are also phonisodes, episodes that can be downloaded to the eyePhone, and changed by users, in case they want to include themselves. These are probably not authorized by the production company.