The Robo-cavemen were a species of Robotic troglodytes created by Professor Farnsworth that inhabited the Robo-planetoid during August of 3010 (6ACV09). They are probably descended from Robo-monkeys and later evolved into Robo-Humans. One of them was named Spencer.

Two of these machines kidnapped Amy and Leela hoping that they would become its wives. Amy wanted rocks, so the girls played along with it. Unfortunately, their husbands died the day after the kidnapping. Leela says she's gonna miss Spencer. 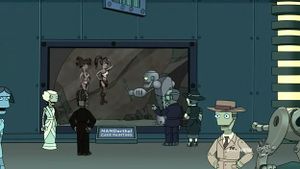 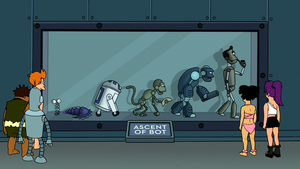 The Robo-cavemen were remembered in such Museum of Natural Robo-History exhibits as the NANDerthal Cave Painting and the Ascent of Bot. The first exhibit shows a Robo-caveman standing in front of a painting of Amy and Leela, while the latter is a chronologically ordered evolution of species consisting of bedsprings, Trilobots, R2 units, Robo-monkeys, Robo-cavemen, and fully evolved Robot Humans. This one also proves the theory of Robo-cavemen descending from Robo-monkeys.

Hermes: Those Robo-cavemen have kidnapped our Human, regular women!

Amy: I think they want wives, so just play along. If it doesn't work out, we'll still get half their rocks.
Leela: I can earn my own rocks! Also, I don't want any rocks.