From The Infosphere, the Futurama Wiki
(Redirected from Human)
Jump to: navigation, search

Humans, scientific name Homo sapiens, are one of the most dominant species on Futurama originating from Earth. Although their exact importance in the Universe can be disputed, given their frequent enslavement by other races, such as the Omicronians and Decapodians, and at least one other race in the past that paired off the most intelligent humans and forced them to mate for unknown purposes. They remain an important member of the Democratic Order of Planets. The DOOP Army is mainly made up of humans. Offshoot species such as Sewer Mutants exist; however, these are shunned and were not permitted to live on the surface of the planet until 3010 (6ACV12).

Humans widely inhabit planets other than Earth, such as Mercury, Mars, and Pluto. Many races such as the Parameciums and the robots of Chapek 9 dream to wipe out the human race but have yet to succeed.

By the year 5000000, the humans on Earth will have evolved into two distinct species: the Intellectually and morally advanced creatures and the Dumblocks. Five years later, the Dumblocks will have taken over. 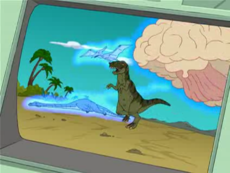 The Human race originates from planet Earth, Sol System that was created over 4.5 billion years ago. The evolution of humans became possible mostly during to mammals rising after the Brain Spawn caused dinosaur extinction 65.5 million years ago. In their early history, humanity was visited multiple times by aliens, such as Osirians in Ancient Egypt and Leonardo da Vinci, a Vincian who claimed to be born in 1452.

For the human race, the following period meant big improvements in technology (such as humans landing in the Moon in 1969), but also war and destruction. Some major conflicts include World War II started by Adolf Hitler at the 20th century, War of 2012 and Sith-il War against the Sith in the 29th century. However, the most destructive war was the First Destruction of New York City in 2308. It caused the destruction of many Earth cities, such as Stockholm and Old New York and started the Second Middle Ages that ended sometimes at the 25th century. Sometimes between that and the 31st century, Earth became finally somewhat peaceful and was united under a single government.

The Dark Matter Engines was a major technological leap, allowing humans to travel vast distances very quickly by moving the Universe around the ship. During to that, humans met many other intelligent species. Some of them have tried to take over Earth multiple times, but have not yet succeed. 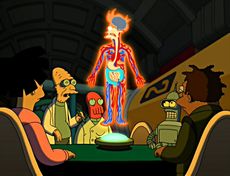 Humans are symmetrical bipedal primates. They are one of many humanoid species in the Universe, others being Amazonians, Amphibiosans, Neutral People, Osirians, Shrimpkins and Vincians (for example).

Mutated humans, called the Sewer Mutants, exist. They are humans mutated by radioactivity such as falling to the Lake Mutagenic. Most of them have an unique mutation, some of them only very little mutated, and some becoming completly unrecognizible. The Sewer Mutants got the same rights as regular Earthicans in 3010. (6ACV12) 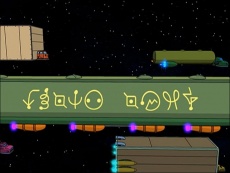 The human life span has greatly increased over the 2000-3000 period. In the 31st century, it is very common for humans to live for more than 160 years. People older than 160 are taken to the Near Death Star, a retirement home where they are connected to a life support system and a virtual reality. However, it is possible to avoid being brought there (for example, if a person manages to escape from the Near Death Star)(2ACV10). One invidual, Ava Porter (who resides in the Near Death Star) is known to have suprassed 210 years in age (by 3001, she was 211 years old).

It is also possible to increase one's lifespan with head in a jar technology invented by Ron Popeil. This allows people to stay alive for over 1000 years. Many modern day celebrities have been brought back to life by this method. It is unknown how long a person can live as a head in a jar. Some people, such as Teller and Max Weinberg have been known to die in their jars. Many important people such as Earth president Richard Nixon's head and members of the Earth Supreme Court are heads jars. The oldest known head in a jar is Benjamin Franklin's head, aged 1305. It is also possible to bring people back alive as zombies (such as Scruffy).

The fertile period of a Human woman's life has also been greatly increased by the 31st century. For example, Mom bore three physically healthy sons when she was over a hundred years old.

Human milk and meat are available, and other human-based products include Soylent Cola, Human Broth and Glagnar's Human Rinds. Human noses, known as "Human Horn", are considered an aphrodisiac, but their use for this purpose is highly taboo.