The Transcredible Exploits of Zapp Brannigan 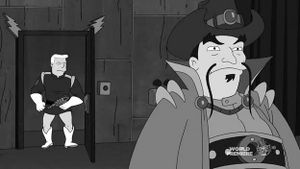 Emperor Chop Chop has abducted the Planet Express crew and is imprisioning the delivery heroes in his ship. He says no one can save Fake Leela... but Zapp Brannigan. So Zapp walks in the room, and shoots the Emperor. Brannigan then rescues his lover by untying her... only to kiss her seconds later. 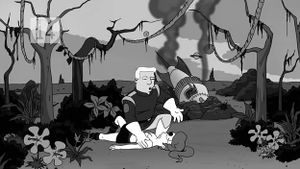 Zapp and Fake Leela had crashed into an Eden-like planet. Zapp is trying to wake up Fake Leela, and tells her he can't face that mysterious planet without her or someone like her. Brannigan then starts performing CPR on her, in a reference to his attraction for real Leela. 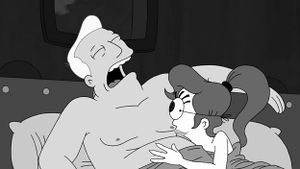 Zapp and Fake Leela in Bed

In the spicy finale, Zapp and Fake Leela are lying in bed... possibly resting from some kind of spicy finale action. They had saved Earth. Brannigan asks her if it was "as good for [her] as it was for the human race". Fake Leela then says she wants more sex, but the Velour Fog is already asleep.

Zapp Brannigan: I wax my rocket every day.

Zapp Brannigan: So, Emperor Chop Chop... Once again we meet at last.

Zapp Brannigan: Leela, wake up. I can't face this mysterious planet without you or someone like you. [Starts performing CPR]
<poem>Zapp Brannigan: [After having sex] That was a close call, but we saved Earth. Was it as good for you as it was for the human race?