The Monks of Dschubba is a sect based deep in the Himalayas, who believe that God exists somewhere in the universe, and using the universe's largest telescope, they search for him on every hour of every day. A task for which, they have a member assigned.

One of its members seems to be a person who moves from crazy sect to crazy sect, describes this as the worst he has ever been in.

The search for Bender

Fry and Leela were in the search for their lost friend, Bender, who had been drifting through space, unable to be caught. As a desperate last resort, Fry wanted to use the telescope to find Bender. But just like finding god in space (by the point they arrive, the sect hadn't even searched one millionth of the sky), finding Bender seemed an impossibility.

Regardless, Fry wanted to try, but when the sect refused to let him and Leela use it, Leela threaten with violence, something the sect had respect for when they locked them in the laundry room. But two days later, Fry finally gave up, then in his last action he threw his hand on the ball controlling the location of the telescope, sending it spinning just so it hit the location of the Galactic Entity, the exact place where Bender had wound up. And using the amplifying device in the telescope, Fry's wish of wanting Bender back, reached the Entity, and Bender was thrown back to Earth right next to Fry and Leela.

As for the monks, when Leela suggested rescuing them, Fry argued that they were monks, and that their god would save them (or at least give them more shoes to eat), but Bender, having been with god himself, argued that you cannot count on god for such events to occur, he moved they helped themselves. 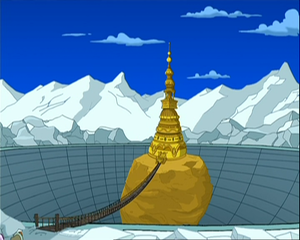 According to Ken Keeler (the writer of "Godfellas"), the word "Dschubba" comes from the star Dschubba in the constellation Scorpius.[1]

Member: This is the worst crazy sect I've ever been in.

Member: Let us out! We cooked our shoes in the dryer and ate them! Now we're bored!