Spock is a character in the Star Trek franchise and one of the three central characters in the franchise's original incarnations. [3] Initially he serves as science officer and first officer (and subsequently as commanding officer) on the USS Enterprise. He later becomes an ambassador for the United Federation of Planets. He was first played by American actor Leonard Nimoy.

In 3002, a picture of Spock holding a can of Pepsi was used at the Oscars to represent Star Trek: The Pepsi Generation [4] as one of the nominees for "Best Soft-Drink Product Placement". [3ACV08]

In 3004, Leonard Nimoy's head and those of the other members of the original cast of Star Trek (except for James Doohan's) [5] reprised their roles by performing a fan script written by an energy being. [4ACV11]

In 3009, Bender detected life using a "Spock-a-scope" [6] during an environmental survey in his capacity as science officer. [ItWGY]

In 3010, URL said to a prisoner at Will Riker's Island "mama said Spock you out" after rendering him unconscious with the Vulcan nerve pinch — a martial technique used by Spock and his species. [6ACV04] 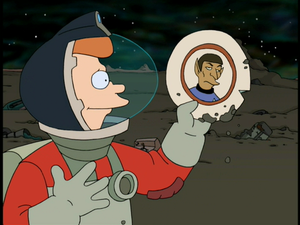 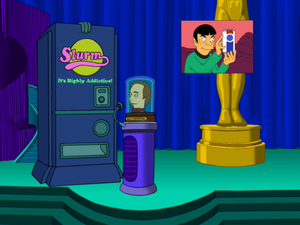 A picture of Spock at the Oscars, in 3002. [3ACV08] Present are the soda-machine robot and Billy Crystal's head.

Fry: Remember that episode where you got high on spores and smacked Kirk around?
Leonard Nimoy's head: No. Perhaps you're thinking of my one-man show [13] about Vincent van Spock— Uh... Uh... I mean "van Gogh".
Damn!
[4ACV11]

Melllvar: Long have I waited for the one who played Spock.
[4ACV11]

William Shatner: [as Kirk] Alas, my ship, whom I love like a woman, is... disabled.
[He slumps back in his chair and rolls his head.] Oh, Lord.
Leonard Nimoy: [as Spock] Fascinating, Captain... and logical, too... that we need some help.
[4ACV11] 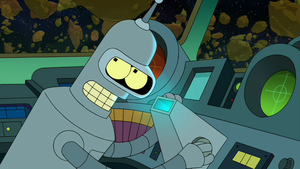