A Clone of My Own

"A Clone of My Own" is the twenty-third episode of Futurama, the tenth of the second production season and the fifteenth of the second broadcast season. It aired on 9 April, 2000, on Fox. Having lived for 150 years, Farnsworth is worried about his legacy and his work, and decides to create Cubert, his clone. Having failed again, he admits his actual age and is taken to the Near-Death Star.

The Professor announces good news: the university is bringing him up on disciplinary charges, though this is not good news at all. When he and the Planet Express crew arrive at Mars University, he discovers it's a surprise 150th birthday party. At the party, they play a video made by Leela showing the Professor's life, examples of inventions like fast cars, trendy night spots and beautiful women he created in his tiny apartment. The video, along with all the comments of his friends make the Professor think he's wasted his life. Leela tries to console him by saying he still has 10 years left. Only 10 years, because when old people turn 160, Sunset Squad Robots take them to the Near Death Star and they never return. He decides to name a successor. After a few days in his lab, the Professor returns to announce his successor's identity. Neither Fry, Leela, Bender, Hermes, Zoidberg nor Amy (who is trusted the Professor's dentures) turn out to be the successor despite having thought one of them was going to be. The Professor reveals his 12-year-old clone, Cubert.

Cubert is released from the Clone-O-Mat. He comes from one of the growths on Farnsworth's back. He is similar to a young Professor Farnsworth, excluding his nose, which is flattened because Farnsworth left Cubert in his first tube too long and it got squished. Cubert is instantly critical of the staff, asking them why they need a bending unit and why the captain has only one eye. When the Professor begins showing off his inventions like the Smell-O-Scope, the Universal Translator and the Dark Matter Engines of the Planet Express ship, he criticises them too, saying "It's all impossible". The Professor takes everyone to Elzar's for dinner to celebrate Cubert being named successor, but Cubert doesn't want to be an inventor. The Professor is very sad because his hopes were broken by Cubert so he records a message for his staff, revealing he's been lying about his age. He's actually 160 and he has alerted the sunset squad to take him away. One of the robots of the sunset squad comes for Farnsworth and takes him.

The crew and Cubert receive the message and use the Smell-O-Scope to track him down. Leela finds the Professor's odour and they mount the Smell-O-Scope to the ship. As Leela pilots the ship Fry smells to look for the Professor and they arrive at the Near Death Star. Bender and Leela disguise themselves as sunset squad robots while Fry disguises himself as the Professor. They need a sample of Farsnworth's DNA, and when Cubert says it's impossible, they get some Farnsworth's DNA from Cubert with a big syringe. They walk into the Barrier Bots, Cubert is inside Fry's coat as the hump. Though still suspicious because no one can escape from the Near Death Star, the Barrier Bots take the Professor's DNA sample and confirm it's him. They give the sunset squad robots, who are actually Leela and Bender, the Professor's address. The crew fly to the interior of the Near Death star, and discover lots of old people being held by machines that get their clothes off and take them to their buildings. Fry, Bender, Leela and Cubert are in the middle of thousands of tombstones-shaped buildings, all of them with a lot of little drawers with the names of old people written on them. They open Farnsworth's drawer, and see him lying in it with tubes connected to him. They have to disconnect him carefully or the shock could kill him. However they are discovered so they run off pulling Farnsworth out. The Sunset Squad Chasers chase them in some hover-ships while shooting. Fry, Bender, Leela, Cubert and Farnsworth (still unconscious) manage to escape and enter the Planet Express ship. A Sunset Squad Chaser shoots the engines and they have to fix it quick. But the only who knows how it works is the Professor. Cubert finally wakes up after being hit by a closing door and says "nothing is impossible". He realizes the Dark Matter engines don't move the ship: the ship stays where it is and the engines move the universe around it. So he fixes the engines and they escape. Back at Planet Express, Farnsworth is alright and tells the crew that the Near Death Star made him think he was in Florida with the rest of the old people. Cubert decides he does want to be an inventor like his father. 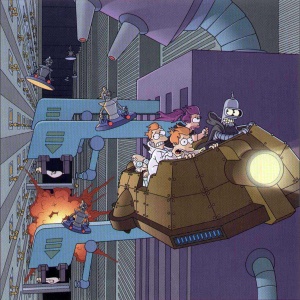 Farnsworth: Everyone's always in favour of saving Hitler's brain but when you put it in the body of a great white shark, ooh, suddenly you've gone too far.

Zoidberg: Good evening, ladies and germs. [Rim Shot.] That wasn't a joke. I was talking to Dean Streptococcus.

Fry: Sorry, everyone, but need I remind you? Blood is thicker than water.
Zoidberg: [writing] Blood ... thicker ... water.

Farnsworth: I have a very dramatic announcement. So anyone with a weak heart should leave now. Goodbye.

Leela: Wait. If he's your clone, why doesn't his nose look like yours?
Farnsworth: I left him in his first tube too long and he got squished up against the side.

Fry: Try shocking him!
Bender: Your social security check is late! Stuff costs more than it used to! Young people use curse words!

Sunset Squad Chaser: [Crashing into the wall.] Ah, I'm so bad at this.

Cubert: Dr. Zoidberg, do you even have your medical degree?
Zoidberg: I lost it. In a volcano.