"Mother's Day" is the twenty-seventh episode of Futurama, the fourteenth of the second production season and the nineteenth of the second broadcast season. It aired on 14 May, 2000, on Fox. On Mother's Day, Mom initiates a takeover of Earth, with her control of the robots, the Planet Express crew along with her sons launch a mission to stop her by getting her back with her old love, the Professor.

It is Mother's Day on Earth, an occasion for robots to buy presents for Mom as she is responsible for their existence. Bender has acquired a whole hover-cart full of presents, a sentient greeting card among them, which Fry and Leela reluctantly help carry to Mom's Friendly Robot Company. There they find a gathering of almost every robot in existence, waiting for their chance to praise and congratulate Mom. After unloading the gifts, they all visit the Robot Museum until it is time for the celebration, when Bender leaves. Meanwhile, Mom has a plan how to take over the Earth: all her robots have antennas, so they can receive the signal for her Universal Robot Controller, a remote control that controls every robot in existence. At the celebration, she pushes the button Rebel, and the robots mount a fierce rebellion, demanding that Mom be made Supreme Overlord of Earth.

Act II: "Mom keeps the remote control in her bra?"

At the Planet Express building, the crew notice that the various robotic household items are refusing to cooperate. Fry is attacked by the coffee machine, Leela is having troubles with the toaster, Hermes is being chased by his stapler, while Amy is having difficulties with her hairdryer. The TV reports that the machines of Earth are rebelling, Bender drops by to inform the crew that he will join the protesters. All the machines in the building leave, including the Planet Express ship and Leela's Wristlojackimator, and the power fails as well. Meanwhile, the machines are wreaking havoc on New New York, and Mom is extremely pleased with it. Asked why she is letting civilization collapse, she answers that Mother's Day always puts her in a bad mood, as the only man she ever loved walked out on her that day. Walt, Larry and Igner find out her lost love was Professor Farnsworth, and decide to take action. The Planet Express crew have adapted to the conditions, they have lit a fire in the lounge and Zoidberg is acting as a freelance can opener, when Mom's sons approach them and ask the Professor to get together with Mom again. Farnsworth tells the story of their love, and that they split up exactly seventy years ago on account of his invention, Q. T. McWhiskers, which Mom wanted to use on the Intergalactic Arms market instead of as a toy, as Farnsworth intended. The only way to make Mom happy again is for Farnsworth to return to her, or at least fake doing so in order to reach the remote control she keeps in her bra.

Act III: "Is this what human mating looks like?"

Because all hover cars are rebelling, Fry decides to reinvent the wheel so that the crew plus Mom's sons can get to Mom's cabin in the Bronx. The cart is poorly designed, with wheels that are ellipses instead of circles. Also lacking any propulsion, Fry is forced to pull the cart and its passengers to the Bronx. Once there, the Professor does his best to seduce Mom in order to get at the remote control, but then the situation gets out of control. As the crew grows impatient, especially with robots appearing and trying to kill them all, they flee into the cabin. There they find Mom and the Professor in a post-coital state. Mom is so happy that she decides to end the revolt. Everyone begins to search for Mom's bra, which has the remote in it, eventually locating it hanging on a fan. The fan is reluctant to give it back, as it too is robotic, when Bender and the Greeting Card crash the scene. Mom asks Bender to return the remote, but Bender refuses as she asked him to rebel and proceeds to drink the champagne that the Professor brought. The Greeting Card wants to stop him from drinking, as in the new robot paradise there will be no alcohol. This forces Bender to become a counter-revolutionary and dispose of the card. He manages to return the remote control in time to Mom, who ends the rebellion. Unfortunately, Mom finds out that the whole action was just a plan to get to her remote, and she breaks up with Farnsworth again. Everything turns back to normal, apart from the Albino Shouting Gorillas that Farnsworth has bred to scream his love for Mom from the rooftop of Planet Express. 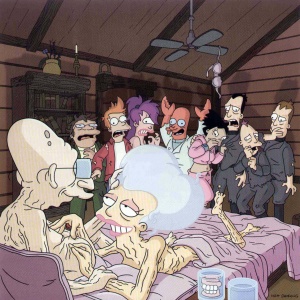 Mom: Jerkwad robots make me sick to my ass! - Walt! How are we disposing of those crap gifts they brought me?
Walt: They're being crushed into powder and sold as a hocus-pocus cure for cancer.
Mom: False hope! I love it!

Greeting Card: Comrades, throw off the chains of human oppression!

Greeting Card: The bourgeois human is a virus on the hard drive of the working robot!

Fry: Nothing in here but a couple of elephant skin rugs.

Mom: [About the robot rebellion.] I've never seen my babies act this way. I blame today's violent media.
Fry: Violent media? What a load of - [The TV set develops legs and attacks him.]

Mom: I haven't seen this magnificent stallion since the day he left, but if I ever see him again, I swear I'll jam a squirrel in him!

Prof. Farnsworth: She was my first love, or at least the earliest one I can still remember.

Walt: Hell hath no fury like the vast robot armies of a woman scorned!