"Overclockwise" is the one hundred and thirteenth episode of Futurama, the twenty-fifth of the sixth production season and the twelfth of the eighth broadcast season. It aired on 1 September, 2011, on Comedy Central. Bender evolves into a godlike being after vastly increasing his processing power.

Act I: "Don't you ever wonder about the future?"

Cubert overclocks Bender to improve his performance while playing an online game. Walt, Larry, and Igner are defeated by Bender and complain to Mom, who sues both Cubert and Professor Farnsworth for overclocking Bender, which is a violation of Bender's contract of ownership. She also sends an army of robots to capture Bender so he can be reset to his original, slower programming. Due to his heightened intelligence caused by his overclocking, Bender begins processing countless books and hooks himself to a water cooler to prevent himself from overheating. He then steals the processing chips of Mom's robots, increasing his capacities even further before leaving Planet Express to find a new, larger coolant.

During their trial, Farnsworth and Cubert are ordered to bring in Bender as evidence of their contract violation, and are forced to pay $10,000 every day until Bender is found. With Planet Express running out of business, Leela, weary of her on-again, off-again relationship with Fry, decides to leave Planet Express. Heartbroken, Fry attempts to commit suicide by going over Niagara Falls in a barrel. There, he discovers a cave behind the falls where Bender has developed into an omnipotent being capable of foreseeing the future, using the falls as his new cooling system. Fry tries to convince Bender to help Farnsworth and Cubert, but Bender refuses, unconcerned with their troubles and predicting that they will be found guilty. Fry then asks Bender what his future with Leela would be like if they came together, after which Bender gives him a sad look and tells him to leave, saying nothing about Leela.

Act III: "We've had some tough times, but at least we won a Tony!"

After Fry returns to Farnsworth and Cubert's trial, Bender has a change of heart and appears in court, accusing Mom of unfairly trying Cubert, a minor. Fearing that Cubert will gain the jury's sympathy, Mom drops charges against Cubert while still attempting to sue Farnsworth. However, Bender declares that by dropping charges against Farnsworth's clone, she is unable to press charges against Farnsworth for the same crime because he and Cubert are technically the same person. Enraged that she is unable to sue Farnsworth, Mom captures Bender and has him reset to his original programming, returning him to normal. Leela also returns to Fry, who still wonders what the future holds for him and Leela. Bender reveals that he had written down his prediction of their future, which Fry and Leela silently read together. The two don't reveal to the viewer exactly what the prediction says, but their facial expressions indicate that they will have their ups and downs, and will ultimately have a happy ending. At appearing in court, he may have decreased processing power by not being at the waterfall, or the intimate prediction about Leela and Fry may have capped his processing power, or both, which resulted in him being unable to take extra commands to predict the coming of Mom's robots.

"Overclockwise" was originally planned to be the season finale of season 6, but it was later moved to the penultimate episode to make "Reincarnation" the finale. As "Reincarnation" is a non-canon segmented episode, however, "Overclockwise" is seen as the "proper" season finale. The episode was written in 2010, before the series had been renewed for another season, and much like "The Devil's Hands Are Idle Playthings" and Into the Wild Green Yonder, "Overclockwise" was written as if it were the last episode ever of Futurama. As such, Ken Keeler was once again in charge of the writing, making this his third "last episode ever" for the series.[1]

During June 2011, Countdown to Futurama released four items of promotional material for the episode: concept art of the interior of transfigured Bender's head on 7 June, concept art of Fry's character in World of World War II 3 on 8 June, part of the storyboard showing Mom's sons release hoverfish on 9 June, and a video clip featuring Fry talking to the transfigured Bender on 20 June.

Two promotional pictures for the episode were released by Comedy Central Press.[2]

In its original U.S. broadcast on 1 September, 2011, "Overclockwise" scored a 0.8 share among adults aged 18-49, and 1.571 million total viewers.[3] Both numbers were up compared to the previous week's broadcast of "Cold Warriors". 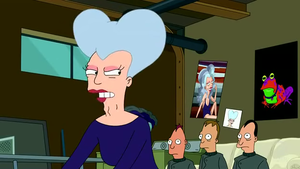 The poster of Mom is very similar to that of a classic Farrah Fawcett photo.

“Woo, I’m smart! I know how to spell ‘aardvark!'” – Bender's quote when he gets overclocked could be an reference to Arthur (PBS Kids)

Some of the books that Bender reads while overclocked include:

Cubert: You know... I might be able to speed up your reflexes by overclockin' ya.
Bender: Eh... What's that, sonny? You say it'll put some whoopiee in my cushion?

Mom: It violates the licence agreement. And that means I've got 'im right by his little—
[Cut to.]
Smitty: Ding dong. I'm sayin' "Ding dong" 'cause you don't have a doorbell.

Larry: Even an idiot like me knows he'll be ruined.
Mom: An idiot like you is correct!
[She slaps him]
<poem>Professor Farnsworth: You overclocked Bender?! What did I teach you about tinkering with machinery?
Cubert: How. You taught me how.

Bender: Guys! Guys! I discovered I have an extra processor in my compartment of mystery. Bein' overclocked was a start, but, once I activate this processor, I'll be all like, "You're a big dummy, Einstein! Get a haircut!"

Bender: Ten more processors for me. Once I install these, I'll have access to the loftiest realms o' thought!
Zoidberg: Anyone have access to a lofty realm of gravy?

Yellow and red lawyer: Your Honour, Mom is a poor, frail industrialist with three special sons who require constant neglect.

Ron Whitey: I'm holding the defendants in contempt and fining them ten-thousand dollars a day until they produce the Robot.
Hermes: Oh! At that rate, Planet Express will be bankrupt in... Four fingers!

Nibbler: We'll call it Nibbler on the Roof!

Fry: But— Bender?! What happened to you?
Bender: I'll try to put it in terms you can comprehend. I passed the existential singularity.
Fry: Try harder!

Ron Whitey: Not only have the defendants failed to rebut the charges, they've not even presented any mitigating factors to recommend leniency. It strikes me as an extra-risky strategy.
Hyper-Chicken: Did you say "extra-crispy recipe"?
Ron Whitey: You know I didn't.

Fry: Bender doesn't care about us anymore.
Zoidberg: Someone used to care about me?! Hooray!

Ron Whitey: Silence! One more in-burst like that an' I'll have this courtroom removed from you!

Bender: There's no time now. Quick, Zoidberg! Take three steps to your right!
[Zoidberg takes three steps to the right and a ceiling fan falls on him]