War Is the H-Word

"War Is the H-Word" is the thirtieth episode of Futurama, the seventeenth of the second production season and the second of the third broadcast season. It aired on 26 November, 2000, on Fox. It guest-stars Todd Susman as a public address announcer. Fry and Bender are enrolled into the army and are forced into a battle against the Spheroids.

Act I: "War were declared"

Fry and Bender are visiting a 7¹¹ where they see an army sergeant get a 5% military discount. After being denied a similar discount because they are not in the military, Fry and Bender sign up, intending to quit after using the discount. Unfortunately, they are thwarted by the outbreak of war - they are stuck in the army. The crew accompany them to South Street Spaceport where the Nimbus, under the command of Zapp Brannigan, is made ready for the expedition. Leela wants to enlist, but Zapp refuses as the military has a strict men-only policy. The ship leaves for Spheron 1, the target of the operation, although no specific reason for the conflict becomes apparent. While the recruits go through their training, one is surpassing all the others: a purple-haired and purple-bearded man who always wears goggles, known as Lee Lemon. Zapp is instantly interested in him for reasons unclear to himself. The Nimbus reaches its destination, and the soldiers are unloaded onto the surface.

It turns out that the enemy are enormous crowds of living balls who attack the Earthican troops by bouncing up and down on them. The soldiers defend themselves and inflict casualties with the enemy, Fry excels by an act of cowardice through which they are overrun. As a bomb is rolling into the Earthican lines, Bender throws himself onto the bomb so it detonates harmlessly inside his chest cabinet. The wounded are brought to a field hospital that has an air of M*A*S*H around it, Zoidberg is part of the surgical team and having his differences with iHawk. Zapp Brannigan makes Fry Kif's assistant for his cowardice. Meanwhile Bender is not too well, but Richard Nixon's head orders him fixed as he has some plans with him. Once Bender is whole again, he is sent on a mission of peace to the enemy leaders, the Brain Balls, and with him goes Earth's top peace negotiator, Henry Kissinger's Head. However, in the shower Fry and Lee Lemon overhear Zapp and Nixon planning to blow up the whole planet with a bomb hidden inside Bender, which is activated by Zapp with a remote control as Bender and Kissinger are already negotiating with the Brain Balls.

Act III: "Make Bender happy or he blows up the planet!"

The Earth troops are preparing to leave the planet, but Lee Lemon wants to know when the bomb will explode. It turns out it is voice-activated, and will trigger when Bender says the word that is on the first place of his Top Ten of most-used words: ASS. Lee Lemon and Fry steal a chopper to save Bender, but Zapp Brannigan tries to stop them. Lemon beats him up (giving him a black eye) and reveals himself to be Leela. She pilots the stolen chopper to the place of the negotiations, where she pushes Fry out of the vehicle so he can land and save Bender. Fry is just in time to prevent Bender from saying the A-word so he won't blow them all to the H-word. Bender promptly uses the new situation to put the screws on the Brain Balls, who give in to Earths demands in order to prevent Bender from blowing up the whole planet. The balls leave Spheron 1, the war is over. Back at Planet Express, the Professor and Zoidberg are unable to remove the bomb, so they reset the word that triggers it - a word from the list of words Bender almost never uses. Bender is curious to know what word it is, but the crew think it is better if he doesn't know. Bender, however, is now set on finding out the word, and as he finds it, the bomb goes off. (The word was "antiquing".) 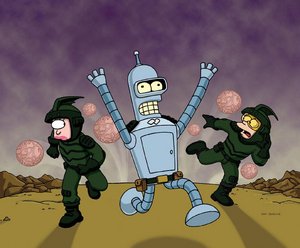 The first promo pic of this episode. 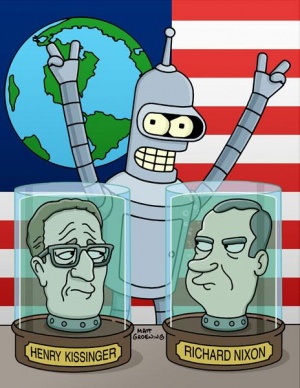 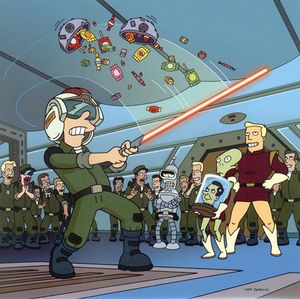 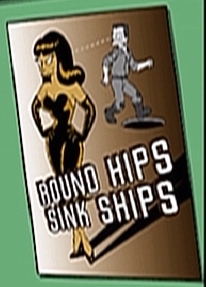 Fry: Oooh, Big Pink - the only gum with the breath freshening power of ham!
Bender: And it pinkens your teeth while you chew!

Bender: This is the worst kind of discrimination, the kind against me!
Clerk: Alright, look, our policy is: If for any reason you're not completely satisfied... I hate you.

Fry: [After getting kicked out of the convenience store.] Paying full price for gum?! That dog won't hunt monsignor!

Zapp Brannigan: Alas, after a series of deadly blunders caused by distracting low-cut fatigues and lots of harmless pinching, the Army decided women weren't fit for service. Not when I’m in charge.

Fry: Uh, just so we'll know - who's the enemy?
Zapp Brannigan: A valid question! We know nothing about their language, their history or what they look like. But we can assume this: they stand for everything we don't stand for. Also they told me you guys look like dorks!

Zapp Brannigan: Private Lee Lemon may well be the finest recruit I've seen in all my years of service. That young man fills me with hope. And some other emotions which are weird and deeply confusing.
Kif: Eeh!

Zapp Brannigan: As you all know, the key to victory is the element of surprise. Surprise! [Pushes button, the soldiers fall onto the surface of Spheron 1.]

Zapp Brannigan: [about Bender] This is the bravest soldier I've seen since my mirror got grease on it. I hereby order that in Bender's honour, he be melted down and made into a statue of himself.

Fry: [About to parachute down to rescue Bender.] OK, this is it. My best friend's life is at stake. I can finally prove I am not a coward. [hesitates] Will you push me?
Leela: I already did.

Henry Kissinger's head: Young man, you have the bravery of a hero. And breath as fresh as a summer ham.

Prof. Hubert J. Farnsworth: Now, be careful, Fry. And if you kill anyone, make sure to eat their heart to gain their courage. Their rich, tasty courage.