"Attack of the Killer App" is the ninety-first episode of Futurama, the third of the sixth production season and the third of the seventh broadcast season. It aired on 1 July, 2010, on Comedy Central. It guest-stars Craig Ferguson as Susan. After Mom launches the new eyePhone, Fry and Bender race to getting a million followers on the Twit app.

At the New New York annual e-Waste event, Mayor Poopenmeyer announces the importance of throwing out dated e-waste. The Planet Express crew is there to throw out their old electronics, such as doomsday devices, Japanese toilets and evidence. When asked where all the waste goes, Poopenmeyer says they get some "minimum-wage nobodies" to fly it off to the third world. This cues Farnsworth to announce to his crew that they are the nobodies.

The third world turns out to be the Third World of the Antares system, where all e-waste is dumped and burnt, turning it into ash and releasing toxic gases into the atmosphere. While the lead alien explains the process to the crew, the other aliens partially dismantle the ship and Bender. Leela is horrified by the devastation caused by e-waste polution, and decides that the crew should avoid throwing out electronics just because it is dated, and takes back her old phone.

Her noble actions are short-lived: when an ad for the new eyePhone appears on television, the crew immediately throw out their current phones and head for the queue, which stretches across town. After a day of waiting, the crew begins to suspect that they are nothing but consumer zombies. Luckily, Dr. Ben Beeler is there to relieve them of their worries, as the eyePhone have all the apps you need.

Upon finally arriving at the Mom Store, a giant screen with Mom announces that the eyePhones are in short supply, which spreads panic among the shoppers. The short supply line is revealed to be a method for increasing demand. Despite being told that the eyePhone has no choice of carrier, can't change the battery and more, Fry becomes impatient and demands the man at the counter to take his money. Fry is about to ask why the device is called an 'eyePhone' when the salesman installs it directly in Fry's eye. 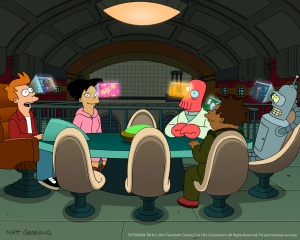 Soon all the crew members are addicts to their eyePhones and especially the extra service, Twit, which allows them to send small video messages to everyone who wishes to see it. Bender becomes obsessed with the popularity he can easily gain from sending out videos and increasing his amount of followers. Fry, on the other hand, is not doing so well in numbers of followers, but decides to accept a challenge from Bender about who can first reach one million followers. The loser of the bet must bathe in a pool filled with puke and diarrhea from a two-headed goat.

Meanwhile, Mom is very pleased with the sale of her eyePhones, because they are a much more efficient way of sucking information out of people than her "old-fashioned methods like spybots and Infosquitoes". With Twitcher, people are apparently willing to post everything they do, which all eyePhones record and Mom can see all this information. In addition, she is pleased to learn that Bender and Fry are holding their million follower-Twit challenge, because when one person reaches one million followers, she can initiate her Twit-worm, what she calls the true killer app of the eyePhone, but never fully explains what it does.

Back at Planet Express, Bender's follower numbers are rising fast, while Fry is still in the two digits. Fry learns about Leela's horrible secret, that she has a bisexual singing boil on her right butt cheek that she calls Susan, an obvious pun on Susan Boyle. In discovering it, his eyePhone also films it. Leela begs Fry not to upload it, even though it will increase the number of his Twit followers. Desperate not to lose, Fry uploads it anyway.

The video is a huge success, and Leela is devastated when she discovers that Fry lied to her. Walking through the streets of New New York, Leela feels she has become a freak show and desperately wants to hide her shame.

The video results in Fry and Bender reaching one million followers at the same time; with no loser, no one has to swim in the pool. Mom is even more pleased with the results, as she now has two million people she can infect with the Twit-worm. In front of the Planet Express headquarters, Leela finds Fry, who reveals that, to show his remorse, he published a video of himself diving into the pool. But Leela has discovered that her boil is already yesterday's news, and nobody cares about it any more.

Meanwhile, around them, swarms of people walk zombie-like towards the Mom Store, where they are going to be the first to purchase the new eyePhone 2.0.

Robert Canning of IGN in his review gave the episode an 8.5 calling it "Great" and also stated in his review ""Attack of the Killer App" had more than enough great laughs to outweigh this weak bit", in reference to the Susan Boyle joke. He also praised the references to iPhone and Twitter jokes. A.V. Club reviewer Zack Helden gave the episode a B saying "This was funny, generally, and I'm glad the series hasn't lost its teeth. It's just, I miss the writers' habit of biting off just a little more than they could chew." He also found the Susan Boyle jokes to be "mean-spirited" but clever and so "bizarre that it worked". Darren Franich of EW Popwatch said the episode was "as good as anything the show produced in its prime" particularly commenting on the speed of the episode and the precision of its satire. He also noted that the episode benefited from good timing, coming right on the heels of recent iPad and iPhone releases which kept the episode from feeling "outdated".

Comedy Central removed mention of the "eyePhone" in their online video previews,[4] resulting in an awkward reaction to nothing by the characters.[5] By this point, neither Comedy Central nor Apple Inc. have made a comment on why the line was removed, but Mac|Life holds that only one company could be interested in removing it.[4] 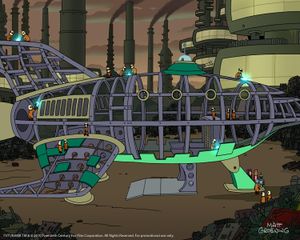 Leela: So long, overly complicated Japanese toilet.
Japanese toilet: [Japanese accent.] Please, not to throw away. I give you happy poopy time.
Fry: Sorry, you know too much.

Professor Farnsworth: These old doomsday devices are dangerously unstable. I'll rest easier not knowing where they are.

Alien on Third World: We burn your e-waste down to the usable metals, safely releasing the toxics into our air and drinking water.