"Yo Leela Leela" is the one hundred and ninth episode of Futurama, the twenty-first of the sixth production season and the sixth of the eighth broadcast season. It aired on 21 July, 2011, on Comedy Central. Leela becomes a Hollywood big shot after creating a hit children's television series. 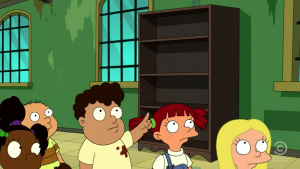 Leela visits the Cookieville Minimum-Security Orphanarium where she grew up in order to read a story to the orphans. However, she is informed that the orphans ate all of their books long ago (being unable to afford food), leaving nothing left to read. Leela tries to improvise a story on the spot, but does a poor job of it, and the orphans are vocal in their disappointment. Dejected by her failure to entertain them, Leela decides to try and write a children's story of her own, but is unable to concentrate in the noisy Planet Express building; she takes the Planet Express ship to another, unseen planet where she will be able to write in peace.

Later, Leela returns to the orphanarium to tell her new story; she has invented a whimsical fantasy setting named "Rumbledy-Hump", which is inhabited by cartoonish creatures called "Humplings" who sing moralistic songs. While the children are initially reluctant to listen, fearing Leela's new story will be just as bad as the first, they are quickly won over by her latest effort, and eagerly ask her to return to tell another story. Leela is then approached by Abner Doubledeal, now working as a television producer, who was watching her presentation from another room. Doubledeal had earlier subjected the orphans to a test screening for a new lineup of children's shows, but none of the flashy, fast-paced programs caught their interest; in contrast, the simple, colorful world Leela created was able to hold their attention. Doubledeal proposes adapting Rumbledy-Hump into a basic cable television series. Leela hesitates, wary of the corrupting influence of Hollywood, but when the orphans encourage her to further develop something that brought them so much joy, she accepts.

Leela arrives late for the filming of the first episode of the Rumbledy-Hump series, having just returned from her "quiet place" with the script in hand. Production goes smoothly, and the episode airs as planned, with the costumed members of the Planet Express crew acting as the main cast. Leela is proud of the work they've done, although she expects little to come of it, claiming that good television series are always canceled... sometimes two or three times. However, when the next day's television ratings arrive (from the future), Rumbledy-Hump is revealed as a smash hit, and its popularity explodes; the show is adapted into a series of books and children's toys, and Leela becomes famous overnight. She is honored at the Slurm-sponsored "Young People's Choice Awards", and attends a celebration that evening, although her newfound fame has caused a change in her attitude; Leela has become snooty and arrogant, regarding herself as a creative genius, and disregarding her friends' contributions to the show.

When Doubledeal tells Leela that he needs the script for the next episode, despite the late hour, she takes the Planet Express ship to her "quiet place" in order to work on it. A dazed Bender stumbles out of the ship, having seduced a fembot at the party, and discovers Leela observing a group of aliens who are identical to the Humplings; it turns out that Rumbledy-Hump is a real place, and is the planet that Leela has been retreating to.

Act III: "Be it parsnips or peppers or kale or zucchini." 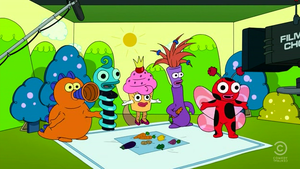 Leela, dressed as Lady Buggle, in the Planet Express headquarters.

Bender learns that Leela never actually wrote any of the scripts for her show; she stumbled upon Rumbledy-Hump while searching for a quiet place to write, and has merely been transcribing the words and actions of the native Humplings, then claiming it as her own work. Bender admires Leela's hypocrisy, although he swiftly blackmails her, threatening to expose her as a fraud unless she shares half of the show's gross profits with him.

Filming of the show continues as normal until Leela is approached by Sally, who shows her a simple drawing of her own magical cast of characters from a place called "Butterscotch Hollow". Leela is surprised that Sally was able to develop an original setting using her own imagination (when Leela herself could not), but Sally replies that Leela's work serves to inspire her. Overcome with guilt, Leela takes the crew to the real Rumbledy-Hump, where she confesses that her scripts are plagiarized from the life experiences of the Humplings. She admits that she should have come forward sooner, but she took great pride in being able to make the orphans happy, and didn't want to disappoint them.

Doubledeal is shocked to learn that the Humplings are real, but quickly turns the situation to his advantage; rather than make a Rumbledy-Hump adaptation using scripts and actors in suits, he simply films the Humplings directly as a reality television show. Leela is outraged by what she perceives as the exploitation of the innocent creatures, but the arrangement is actually a beneficial one. The Humplings are introduced to the conveniences of modern technology, greatly improving the quality of their lives, while Doubledeal himself adopts all of the orphans, putting them to work as the show's production crew and providing them all with full-time jobs. Leela, however, is still wracked with guilt, and has developed a psychological need to be criticized for her deception, demanding to be "punished". She cries out in despair as the assembled children and Humplings sing and dance around her, proclaiming their love and appreciation for her.

During May 2011, Countdown to Futurama began released three items of promotional material for the episode: concept art of Amy and Zoidberg dressed up as other characters from the episode on 24 May, concept art of Bender wearing a fur coat and a bling on 25 May, and part of the storyboard showing two babies engaged in Extreme Toddler Wrestling on 26 May.

Comedy Central released a video clip set in the Cookieville Minimum-Security Orphanarium featuring Leela telling Warden Vogel that she has a new story for the orphans and Abner Doubledeal visiting to conduct market research on 14 July, 2011.[1]

Scruffy appears briefly as male, in spite of still being a woman at the end of "Neutopia".