"2-D Blacktop" is the one hundred and twenty-ninth episode of Futurama, the fifteenth of the seventh production season and the first of the tenth broadcast season. It aired on 19 June 2013, on Comedy Central. Professor Farnsworth joins a gang of street-racing punks.

While the crew prepare to depart for a delivery, Farnsworth finishes turbocharging the ship's matter compressor and naming the ship "Bessie". Leela argues with Farnsworth over the tradeoff between speed and safety, suggesting that he install seat belts instead. He dismisses her concerns, and she attempts to make the delivery. The ship barely clears the hangar doors before the malfunctioning and crashing back to Earth in a fiery explosion. Representing the severely injured crew, Leela insists on getting a new, safer ship while Sal tows Bessie away. Farnsworth takes this very personally and storms out with an apparently permanent "Goodbye!" He goes on to break into the scrapyard where Bessie lies in a heap, awaiting destruction. He declares that he will convert the ship into a hot-rod using the spare parts lying around the scrapyard.

The next morning, Farnsworth flies away from the scrapyard in Bessie, now a nearly unrecognizable junk heap. Driving like an old man through the city, Farnsworth is unaware that he is impeding a multitude of frustrated commuters. The drivers of two muscle-hovercars move up on either side of him to scold and mock him for "making the streets unsafe for us maniac street-racers." Farnsworth challenges them to a race, which they mockingly accept, given Bessie's condition. As Farnsworth counts to three to start the race, he banks his ship left and right to unload the piles of scrap he has been inexplicably carrying, revealing that he has indeed converted Bessie into a hot-rod. A brief race ensues, in which the police give chase. The other racers flee in a conventional fashion, but Farnsworth escapes the police extra-dimensionally using a dimensional drift device he had installed the night before. He regroups with the waiting racers, who are awestruck by his driving and invite him to join their "crew".

At headquarters, Leela unveils the new ship, a windowless, nearly featureless, gray box that promises to be both safe and boring, outside and in. The maiden voyage is to a place of glorious beauty, but the delivery crew have no idea. Not only are they unaware of the grandeur, they are also unaware that the ship has made the delivery for them. It opens the exit door only when it has returned the crew safely back home. Leela seems to have suddenly become a soccer mom: Hermes sends her to shop for groceries and deliver Fry and Bender to karate class. During Leela's return from these errands to headquarters, Farnsworth pulls alongside her in his hot-rod and tells her that she is not cool. Leela exclaims that she can still outdrive him, even in her ultra-safe ship. As they race on a looped track, Farnsworth again uses his dimensional drift device to attempt to win. Unfortunately, he ends up facing the wrong direction toward a head-on collision with Leela's ship. Fry is standing between the two ships as they collide, compressing to near-flatness in a neat disc shape.

Gallows humor notwithstanding, the spectators presume Fry, Leela, and Farnsworth to be dead. The three are not dead; in fact, Hermes' dark humor is closer to the mark. As a two-dimensional but otherwise healthy Farnsworth conjectures, "It seems that colliding at relativistic speed has collapsed us down into two dimensions!" The three of them then find out that Bender was sleeping in the backseat of Bessie and therefore he got collapsed too.

The episode finishes with a mockingly corny and sappy scene: Minx, the street-racer whose father verbally abused her by leaving things unsaid, receives a phone call from her father, who then apparently says those things.

On 14 December 2011, geek blog Geekologie posted a picture of the episode's production script to their Facebook page.[1] The picture was accompanied by the following description.

In February 2012, the episode's title was registered on the US Copyright Catalog.[2]

On 5 February 2013, Vulture.com released a preview clip for the tenth broadcast season,[3] which contained footage from the episode.

On 30 April, Comedy Central released a preview clip of the episode as the first item in the year's Countdown to Futurama, and revealed the episode's air date.[4] 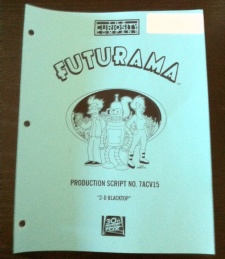 The cover of the episode's production script.[1]

--Since the Professor says that "seat belts are dead weight" he could have removed them in the meantime to feed his demonic speed lust.

Professor Farnsworth: That's it, you hoodlums! Your mouth just wrote a PayPal transfer request that your butt has insufficient funds to honor!
Racer #1: Yo. It is on! Before that it was off.

Amy: [upset] Do you think they're... dead?
Hermes: No, no. I choose to believe they're alive in some other dimension. Screamin' in agony.
[Amy wipes away a tear.]
Amy: I hope so.

King of Flatbush: The feast is served. Choose whatever two-dimensional foods you like. Crêpes, flatbread, McDonald's hamburgers. You get the idea.
Leela: Yum, apples! [She grabs a piece of apple and attempts to eat it.] Hey, how come I can't swallow?
Professor Farnsworth: Hmm, I guess it's because our two-ended digestive system can't exist in this dimension. I suppose that could be an issue.
[Leela mumbles and spits the piece of apple out.]
Leela: I knew it! I knew he'd get us killed somehow!
[The Professor begins to type on a computer.]
Professor Farnsworth: As you can see, or rather can't see, but take my word for it, such a digestive system would divide a 2-D being into separate pieces!

King of Flatbush: He's opening our minds to new ideas. Kill him!

Time: 06:54
Location: Sign on a building next to where Smitty and URL brake their police hovercar
Language: AL1
Translation: HOT BLOOD